April 8, 2016: The symbiotic recurrent nova T CrB has entered a super-active state, and it is brighter and bluer than it has been since before its last outburst in 1946. Multicolor and visual ongoing observations are requested.

Visual and multicolor observations in the AAVSO International Database show that the average magnitude of T CrB was V ~ 10.2-10.3 until early February 2015. Its average magnitude then brightened to V ~ 10.0 and remained there until early February 2016, when it began brightening again and has currently reached V ~ 9.2. The B-V is roughly half what it was two years ago. 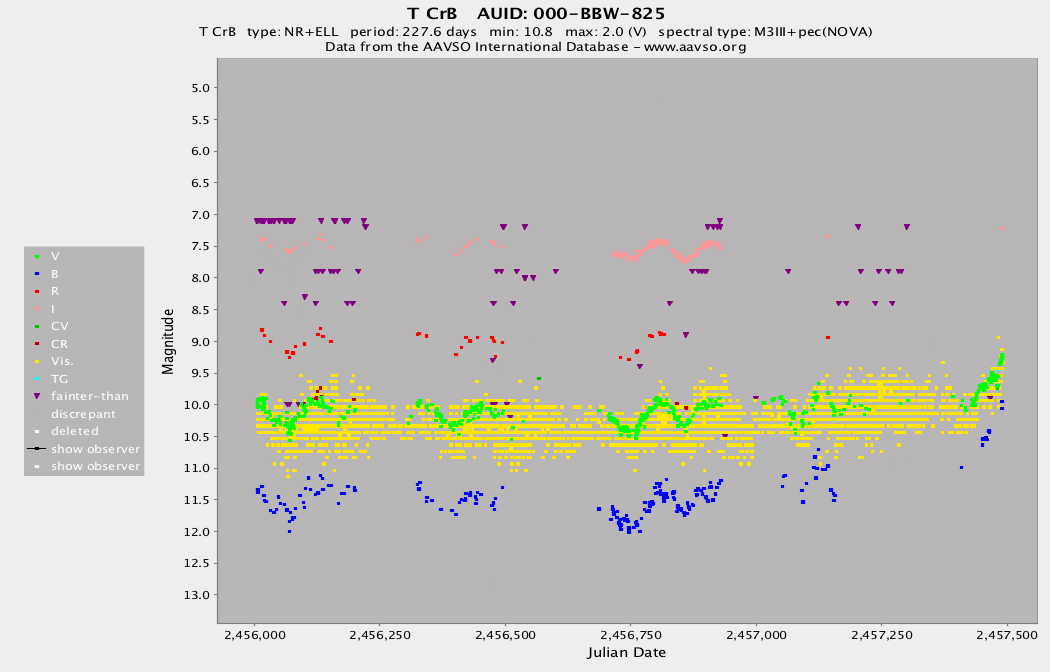 A light curve may also be plotted using the AAVSO Light Curve Generator.

T CrB has been observed twice in outburst, in 1866 and 1946. Each time it brightened rapidly to V ~2.0, then declined back to pre-outburst levels.

A recent paper by U. Munari, S. Dallaporta, and G. Cherini (http://arxiv.org/pdf/1602.07470.pdf) gives an analysis of the current behavior and the 1947-2016 behavior. Their abstract begins: "The recurrent nova T CrB has entered in 2015 a phase of unprecedented high activity. To trace something equivalent, it is necessary to go back to 1938, before the last nova eruption in 1946. The 2015 super-active state is characterized by: a large increase in the mean brightness (Delta B =0.72 mag over the uderlying secular trend), vanishing of the orbital modulation from the B-band lightcurve, and appearance of strong and high ionization emission lines, on top of a nebular continuum that overwhelms at optical wavelengths the absoption spectrum of the M giant..."

Munari et al. include over 120,000 AAVSO observations in studying the 1947-2016 optical behavior. They point out that the AAVSO data show a few intervals when T CrB was brighter than its average post-outburst magnitude, but nothing approaching its current state. They also point out that, as far as they are aware, the only other time T CrB was in a super-active state was in 1938 (Hachenberg and Wellmann 1939 in Munari et al.), ~70 years after the 1866 outburst, and that the current super-active state is occuring ~70 years after the 1946 outburst. They conclude by wondering if an outburst of T CrB may be on the horizon for 2026 (80 years since the 1946 outburst, the same interval between the 1866 and 1946 outbursts).

Following up on Munari et al., R. Zamanov et al. report in ATel #8675 that their observations of 7 February 2016 show that T CrB is brighter in B and U but that the amplitude of flickering in B and U has decreased.

Hundreds of AAVSO observers - over 45 since January alone - have been following T CrB faithfully for decades and are continuing to do so.

Finder charts with a comparison star sequence for T CrB may be created using the AAVSO Variable Star Plotter (VSP).

There is a discussion thread on T CrB on the AAVSO forum for Cataclysmic Variables (https://www.aavso.org/t-crb). Please read the posts there to see what is being said about this exciting behavior. Anyone may read these posts; to contribute a post you must have a (free) AAVSO web account and be logged in to it.

This AAVSO Special Notice was compiled by Elizabeth O. Waagen.

A Special Notice archive is available at the following URL:
http://www.aavso.org/special-notice-archive

Subscribing and Unsubscribing may be done at the following URL:
http://www.aavso.org/observation-notification#specialnotices