This issue the editors are pleased to present an article by our collaborator, Joseph Lawrence A-82), who describes a simple and inexpensive way to record solar flare-induced atmospheric anomalies (sudden ionospheric disturbances). Mr. Lawrence provides the following text and graphics.

AN EASY TO BUILD A/D CONVERTER INTERFACE FOR VLF RECEIVERS

In a previous SID Technical Bulletin (April 1996), fellow contributor Alex Panzer described the successful interfacing of his VLF receiver to a computer via a Tandy Corporation digital multimeter. Mr. Panzer discussed several desirable features of the Tandy unit such as its low noise, ease of operation and ready-to-run recording software. At the time of his article's publication, my SID monitoring system utilized a Rustrak recorder, and I didn't have a spare computer to dedicate to SID monitoring. Shortly thereafter, I accidently broke the needle on the Rustrak unit while replacing the paper. Upon ordering a replacement part, I expected to receive a complete galvanometer needle mechanism for the quoted charge. However, when the part arrived and I discovered that my $29.95 had purchased only another flimsy needle without installation instructions. My disgust and frustration gave way to resolve. I would never load another roll of strip-chart paper!

I was seriously considering purchasing the Tandy multimeter when I read about a simple 12-bit A/D converter that required very few support components and derives its power directly from the parallel port on a small personal computer. Author Mike Gray (N8KDD) describes the construction and operation of the converter in his article, "Build the QUAD- 1 2 Personal Datalogger" ('73 Amateur Radio Today, page 10, August 1996). Based on the Maxim MAX186DCPP serial A/D integrated circuit, the datalogger can easily be built in one afternoon for less than $40. Mr. Gray cleverly packaged the IC and the five support capacitors in a DB-25 connector and backshell. Knowing that my soldering skills might not meet the challenge of the specified surface mount components, I sourced other parts for the project and constructed the interface. The accompanying parts list is my selection, whereas DIAGRAM 1 imitates the original circuit of the QUAD-12 datalogger (permission from Mike Gray is gratefully acknowledged). All parts may be ordered from Digi-Key except for the general purpose PCB which is a standard Radio Shack component. 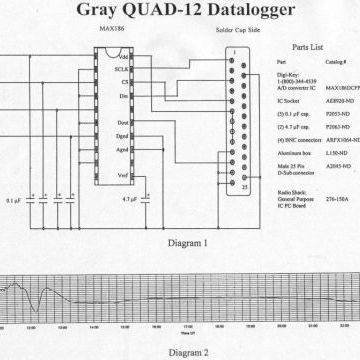 The Gray QUAD-12 datalogger meets the criteria outlined by Alex Panzer for a suitable VLF receiver computer interface. As constructed, the converter has acceptable EMI noise emissions which, although not measured, do not interfere with VLF reception as evidenced by the recording trace collected during the first week of testing (DIAGRAM 2). In use, I adjust the receiver gain until the output voltage at midday is about 2.5 volts. The converter attaches to the parallel port of IBM-compatible PCs, and so does not require an additional slot or internal installation. The 12-bit digital resolution over the 4.096 volt range provides excellent signal variation discrimination. Even though the IC can be connected with eight input channels, the Gray design makes use of only four. The converter could feasibly interface four VLF receivers simultaneously. I plan to build a gyrator-tuned VLF receiver to accompany my older slug-tuned coil receiver to monitor SIDs on another frequency.

Mike Gray offers a generic data acquisition program to sample and record the converter output. For purposes of long-term unattended recording, I wrote a compiled QuickBASIC program which I will gladly share with other flare recording contributors upon request. The need to re-initiate data logging if the computer re-boots due to a power failure required the program to run without user prompts. Necessary inputs such as the parallel port address, frequency of data sampling, and recording start/stop times are read by the executable from a configuration file. The executable should be called from the last line of the AUTOEXEC.BAT file, so that upon reboot the program will automatically run. Operationally, I use a sampling interval of 15 seconds and specify recording to commence at 1 0:00 UT and to halt at 00:00 UT the following day. At my location in Indiana, this range allows recording of the sunrise and sunset effects, and will give a consistent scale throughout the year. Signal levels are written to external files in ASCII format with time-stamps of each reading. The file name is encoded with the date of collection. If logging is interrupted by power failure, when collection resumes the data will be appended to the appropriate day's file.

Monitoring could occur around the clock, but recording for only fourteen hours each day has two advantages. Once the data is collected, the file is imported into a Microsoft EXCEL spreadsheet for plotting. My present version of EXCEL has a plotting range limit of 4000 data points, and this interval conveniently stays within this constraint. Secondly, I do not presently analyze my own recordings for flare events, and since editor Peter Taylor has expressed his preference for a hardcopy plot on a 1 -inch/hour scale, I gratefully oblige his request. I can comfortably fit three days worth of plots on one side of an 1 1 x 17-inch sheet at the desired linear scale. It may seem absurd to electronically store a month's worth of data and then submit a hardcopy plot for analysis. However, according to Peter, flare event definiteness frequently depends upon event correlation among several recorders' plots. In addition, a simultaneous review of submitted plots permits event correlation analysis. Alex Panzer previously expressed the value of computer compilation and processing of the SID data and further recommended a coordinated effort to standardize a data format for electronic submission to the Solar Division analysts. Admittedly the idea of submitting a diskette of daily SID recording files is more appealing than sending hard copies. However, hard copies are apparently more suitable for the data reduction procedures.

Anyone who has the skill to build the gyrator receiver also has the skill to build the Gray QUAD-12 datalogger. Mike Gray has done the amateur science community a favor by providing this robust and simple measuring tool. It works well for the SID detection systems and already I'm considering other applications, such as a Hall-effect magnetometer to monitor geomagnetic disturbances. My LOGGER.EXE software runs under DOS and supports EGA or VGA monitors. Anyone interested in building the datalogger may request a copy of the software and instruction sheet by e-mail or postal mail. Remember, this simple A/D converter can liberate you from strip-chart recorders forever!