Campaign on b Per eclipse - Alert Notice 688

AAVSO Alert Notice 688 announces an observing campaign on the very bright, triple-star eclipsing system b Per beginning in early January. Please see the notice for details and observing instructions. 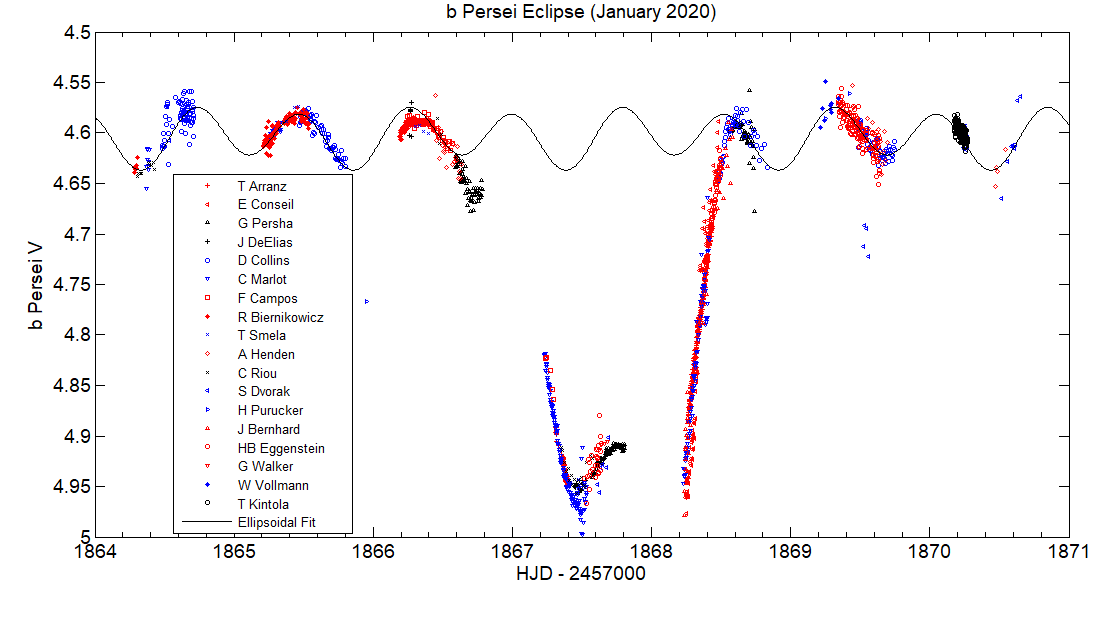 I am pleased to say that I have processed all the V and TG data submitted to the AAVSO for the 7 days centered on the primary eclipse of the rotating AB binary pair by the third star of the system.  See the attached figure with the 18 observers listed that submitted data between "mjd" (JD - 2457000) 1864 and 1871.  For those 7 days (nights) over 4600 total observations were submitted covering several bands.  That is about 11% of the total number of observations of b Persei in the AAVSO International Database.  About 3000 observations are plotted in the 7-day figure.  I omitted several extreme outliers and data sets that did not show a stable out-of-eclipse value for the baseline.  Thanks due to good teamwork, the observers spanning all of Europe and North America we were able to cover each night of the eclipse except for the "Asian gap".  This occured in spite of the atrocious winter weather between clouds, rain, and snow storms.

Let me summarize the main points that the recent data show.  This was the third primary eclipse in which the C star transited across the AB close binary pair between the binary pair and the Earth blocking some of the light of the A or B star at different times.  We observed the deepest eclipse ever seen of this system.  The deep eclipses arise from the partial blockage of the hotter, brighter, larger A star (spectral class A) by the smaller, fainter, cooler C star (assumed spectral class F).  The depths of these eclipses will give us a handle on the spectral classes and sizes of the third star compared to the inner two stars with refinements to the models.  The minimum brightness observed is about 4.96 +- 0.02 observed on mjd(1867.6). Extrapolating into the Asian gap we missed a deeper eclipse at mjd ~1868.05.  Looking at the light curve of observations it seems by eye that the "mid-eclipse" came a bit earlier than the predicted date of mjd = 1868.0.

We also saw a grazing eclipse on mjd 1866 that ended at mjd 1866.5.  That was not predicted by my simplistic simulation.  As the data were coming in several of us thought the sudden change in slope of an individual observer's light curve was the onset of the first mini-dip.  Instead, after carefully plotting all the observations with a common reference level (the out-of-eclipse LC) this first "kink" was actually the egress of the grazing eclipse, which was observed by several observers!  Here is the predicted Jan 2020 light curve.

I will soon provide the animations of the predicted simulation light curve to this forum as well as the animations using the same stellar parameters for the other 5 observed time series ecclipses.  These eclipses are much easier to follow the complicated dips and misses when we see a simulation in motion.  It will give us some hints at refining the simulations and we hope to prove their correctness!

The 1 week light curve of the January event as well as the ingress half and the egress half at higher resolution may be viewed in the figures linkes below.