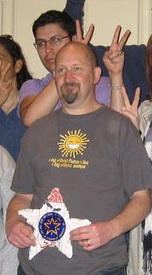 It was announced at the AAVSO Banquet, Saturday, May 21, 2011, that the 2011 recipient of the AAVSO Director's Award is David Benn of Klemzig, South Australia.

Arne's citation told of how he and David met and how that meeting developed into a reincarnation of VSTAR though David's selfless hard work and devotion. 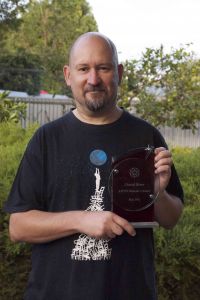 "I met David at the National Australian Convention of Amateur Astronomers (NACAA) meeting in 2008 while visiting Australia. He is a software engineer living in Klemzig, South Australia (a suburb of Adelaide), who approached me and asked if there were any software projects that he could help with for the AAVSO. Donna Young was in the process of updating Hands On Astrophysics, and while she had a good handle on the text and scanned 35mm slides, the missing piece was VSTAR, the photometry visualization tool that accompanied the package. I suggested to David that porting VSTAR from its DOS/BASIC form into a modern Java tool might be a good project.
David enthusiastically agreed, and together with Aaron and Sara, we developed a design document for the port, and David started coding.  Not long after this, we were awarded the Citizen Sky NSF grant, and part of that grant was to provide a visualization tool for display of the epsilon Aurigae light curve. VSTAR soon became the showpiece for Citizen Sky, and has expanded to not only display chronological observations, but also phase plotting, period searching, and easy expansion with plug-ins to provide any analysis tool that you need.
David is the perfect example of a volunteer who brings to the table expertise not available at headquarters; devotes an enormous amount of time and effort in supporting our organization; and does this without asking for any recognition. This award is only a small token of my appreciation for his contributions."
The Director's Award (NOT the fun VSTAR star in the photo above) will be sent to David in Australia.
Congratulations, David!!!
Tags
front page news
director's award
awards
2011