Monthly featured variables to observe in 2021!

I bet you have noticed a star twinkling in the night sky—stars can shimmer because of Earth’s atmosphere or air. The turbulent air surrounding our planet affects the starlight, making it look like the star is sparkling! But did you know that even if we traveled outside our atmosphere, and paid close attention to the stars, we could still see many of them change brightness?

Many of the stars we see get brighter and even fainter over various periods of time. Some stars dim, brighten, dim again, and so on…in less than a second! Other stars take years to vary their brightness—and not because the star is dying. These stars are called “variable stars.”

Explore below to see a variable star that YOU can see every month! Many of these stars can be seen from all around the globe, but most are best viewed from the Northern Hemisphere.

All featured variable star content on this page is the result of a group effort between the AAVSO, Ball State University, and the International Planetarium Society, with the goal of bringing more astronomy into your home, and guiding you into making your first scientific observations!

One variable star YOU can see this month is Propus, also known as Eta Geminorum. It’s in the constellation of Gemini, "The Twins." Gemini is a rectangular shape in the stars that represent the twins Castor and Pollux from Greek mythology. In fact, the top two stars of the rectangle are named Castor (the western star) and Pollux (the eastern star). These stars mark the heads of the twins.

Since Propus is Greek for “foot,” it makes sense that this star is found at the bottom of the rectangle, at the end of the leg of Castor, about midway between Mu Geminorum and a bright cluster of stars. A U.S. Navy cargo ship, USS Propus, was named after the star.

German astronomer and geophysicist, Julius Schmidt, first recorded Propus as a variable star in 1865. You can conveniently compare it to the nearby star Mu Geminorum. Propus slowly changes its brightness by 50% over 234 days.

Besides its variability, Propus has another claim to fame. It lies within one degree of the ecliptic (the apparent path the Sun makes in the sky throughout the year). This is also the part of the sky where you can find the Moon, and many other solar system objects that are much closer to us than the distant stars. The ecliptic draws its name as being in the part of the sky where eclipses of the Sun and Moon occur. Occasionally, the Moon will occult (pass in front of) Propus. Rarely, one of our solar system planets may occult the star. The last time this happened was in 1910, when Venus made its way in front of the star.

Propus is a red giant star—which you can guess means that it is a really large, red star. In 1881, a famous observer of double stars, S.W. Burnham, discovered that it had a dimmer, yellow companion in orbit around it. Today, we know that there are three stars in orbit around each other there, meaning it is a triple star system. Its even closer companion may eclipse the brighter, main star every eight years. With a little practice, you could likely detect these changes in brightness, even from all the way here on Earth!

To help you explore Propus, Gemini, and the rest of the night sky, try using our Propus star comparison/finder chart below and observation guide, or an app on your phone. 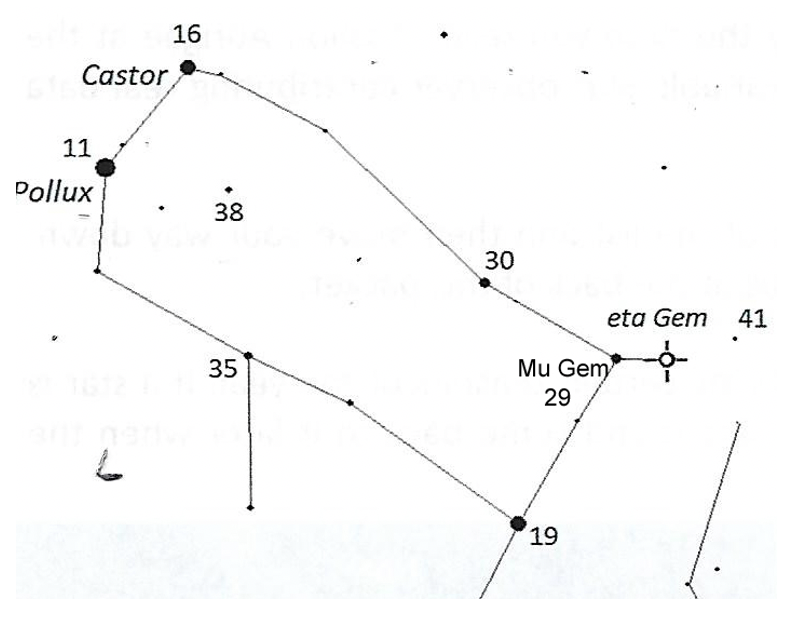 Check back for information as April approaches!

Check back for information as May approaches!

Check back for information as June approaches!

Check back for information as July approaches!

Check back for information as August approaches!

Check back for information as September approaches!

Check back for information as October approaches!

Check back for information as November approaches!

Check back for information as December approaches!

January: Pleione in the Pleiades

One variable star YOU can see this month is Pleione, a member of a bright star cluster in the constellation Taurus, "The Bull." This cluster, called the Pleiades, looks like a small spoon or a very tiny dipper in the sky.

Why does Pleione change brightness like this? Pleione rotates once in just under 12 hours, so fast that some of the star is forced outward, forming a sort of disk shape around the star. Interactions between the star and the disk can cause minor changes in the star’s brightness. With a little practice, you can likely detect these changes from Earth!

To help you explore Pleione and the rest of the night sky, try using our special star comparison/finder chart below, our observation guide complete with tips on determining this star's brightness from night to night, or app on your phone! 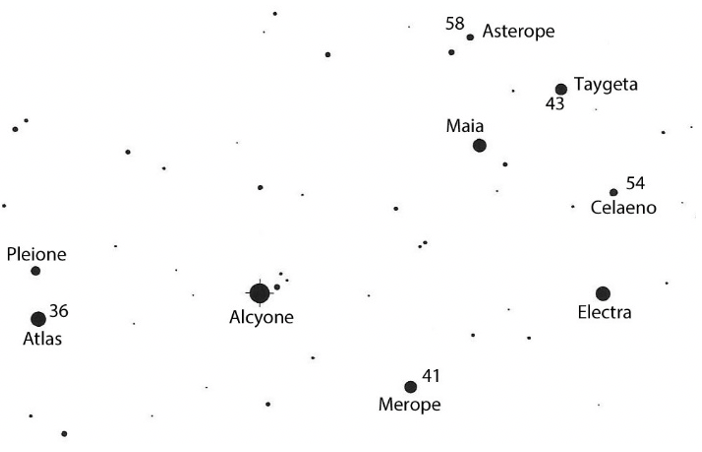 One variable star YOU can see this month is Betelgeuse, normally the brightest star in the constellation of Orion, "The Hunter." It is easily seen in the eastern shoulder of The Hunter, even from within a city.

Betelgeuse is amongst a class of stars known as “red supergiants.” As its name implies, Betelgeuse is so large that, if it were placed at the location of our Sun, its outer atmosphere would extend out beyond Jupiter! It is a relatively nearby star, roughly 420 light years away. A “light year” is the distance that light travels in one year—almost six trillion miles!

Betelgeuse may one day explode as a supernova, but it is far enough away that it will not present a hazard to Earth. However, the explosion will be bright enough that we will see it in the daytime and astronomers will have an opportunity to easily study the explosion.

While awaiting the possible supernova explosion, we can watch Betelgeuse pulsate on an 11-month timescale, first determined in1836 by John Herschel—son of the astronomer William Herschel, who discovered Uranus. As it pulsates, it can change in brightness, becoming three times brighter!

You can compare it to Rigel, also known as Beta Orionis, which is diagonally opposite Betelgeuse in Orion; Bellatrix, a.k.a. Gamma Orionis (in Orion’s other shoulder); or Aldebaran, the bright eye of Taurus the Bull. In late 2019 and early 2020, Betelgeuse dipped to the brightness of Bellatrix, its faintest on record. With a little practice, you should be able to detect these changes, even from all the way here on Earth.

To help you explore Betelgeuse, Orion, and the rest of the night sky, try using our special star comparison/finder chart below and observation guide, or an app on your phone. 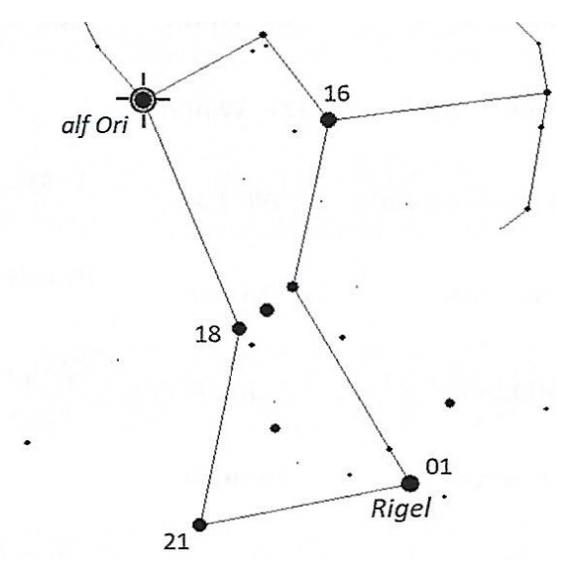 on our monthly variables:

Pleione in the Pleiades (January)

Questions about the 2K versions?