Gamma Persei is a long term eclipsing binary. The first ever eclipse minimum of Gamma Per was observed in September 1990, about which, some scientific publications have been written. The following eclipse was expected to be in April 2005, but no definite expected window was described anywhere. From late March to end of April 2005, I did observe the star and took a few digital images of the sky around it as well. In only one of these observations, I noted Gamma Per to be slightly fainter than normal; mag. +3.1 instead of +2.9, which was on 18th April 2005. I have no other personal observations, nor found other observations from others around the expected minimum of 2005, so I cannot be sure if my 18th April 2005 observation is indeed reliable.

Because of this uncertainty in the period of Gamma Per, it is certainly a good idea to monitor the star for its upcoming minimum from 1st November 2019 on.

One last interesting possibility is, Gamma Per and Zeta Aur, another long term eclipsing binary, may be at their respective minimums simultaneously. The next minimum of Zeta Aur is expected to be around 14th November 2019.

Thank you for the "heads up" about these eclipses.  Maybe I'll get out my eps Aur equipment...

I have observed three eclipses of Zeta Aur in the past decade. The system consists of a B7 type star being eclipsed by a type K4 super giant. Because of this, the eclipse is about 0.5 mag deep in B and much less in V and R. It is almost undetectable in I. I do not have U band capability but the eclipse is quite deep in that band. Because the K star is about 40 times larger than the B star, the partial phases of the eclipse are very short (only a couple of days). I expect the descending leg of the eclipse to occur from Oct 24 to 27 and the ascending leg Dec 1 to 4. The total phase of the eclipse will last the entire month of Nov.

I was contacted in July by Brian Mason (USNO), Elizabeth Griffin and others, who had observed gam Per during the 1990 eclipse,  about photometric monitoring of the upcoming eclipse.  I suggested that they contact HQ to set up a campaign.  Tom Calderwood has contacted a few PEP folks to begin monitoring.

Because of this contact from some old friends (I've been in astronomy too long!), BSM_NH2 has been monitoring gam Per since July 24 at SU/B/V/SR/I.  It is a tough target in that there are no bright comparison stars nearby.  There are some useable comps, if you offset the field so that gam Per is near one edge.  Of course, they have no multifilter calibration, so I've been working on that as well.  The 1990 photometry used tau Per as the main comparison star - a long period EB, but currently constant (as it was in 1990).

Therefore, I set up BSM_NH2 to take lots of short exposures, with the plan to stack and use these fainter comps.  Currently, this means:

The 1270 images collected so far sounds like a lot, but really only amounts to 17 visits to the field.

The reason I bring this up is that I'm collecting the data, but have't have time to analyze it.  If anyone (like Gary) is interested in helping, I can get the images shared via VPHOT or put on ftp.  In the near future, I'm hoping to be able to do real-time stacking with MaximDL at the telescope, so that the image quantity will be drastically reduced.  I just need more time to test software!

Great to hear gam Per is being monitored.  Thanks for suggesting I might like to process the data:  I would like to, but I really REALLY shouldn't take on another project right now.  I have vast amounts of my own data that hasn't been reported or published yet...

zet Aur is another good target for the BSM telescopes.  Note that we do have an SU filter and so can do U-band photometry of the system.  The last BSM data was taken in 2015 of this system.  If you are interested in following it, submit a propsal at

This system is pretty easy, with eta Aur nearby for a good comparison star.

For PEP observers, my plan is that we use tau Per as comparison and theta Per as check (I'll update the AAVSO list of PEP stars).  Here is a paper with data from the last eclipse:

As you can see, U band was poorly sampled.  If you, or someone you know, has an SSP5 please contact me so we can talk about U band work.  I presently have two U band observers lined up but would like more.

I can use advice about second-order extinction (hint, hint, Arne)

I have settled on tau Perseus as the comparison and iota Perseus as the check.  The PEP database has been updated, so you can submit observations for "gam per" via WebOBS.  Let's get a baseline before November!

Revised versions of the PEP reduction spreadsheets are forthcoming.

It is time to start intensive observations.  As noted above, the date of first contact is not certain.

There is a note about the eclipse contact times of Gamma Persei in another forum site http://www.astrotreff.de/topic.asp?TOPIC_ID=244336&whichpage=1, which says:

"According to the best ephemeris (and guided by deductions from spectra taken during the 1990 and 2005 eclipses), mid-eclipse will occur on 2019 November 23."

New ephemeris based on Tom's data:

Refinements to be made when the eclipse has ended. Thanks Tom for the heads up!

Isn't 2.8 slightly brighter than normal? I recorded it as 2.9 for the last month.

It is great to learn the eclipse is beginning. Apparently yesterday's observation of mine (16th Nov, 1900 UT) was just before the onset of dimming.

On another note, it is also good to confirm the shorter period of 5330 days is much closer to the real value. And, what I had observed in 18th April 2005 was indeed part of the eclipse.

You can now see the different slopes of U, B, and V as the eclipse proceeds 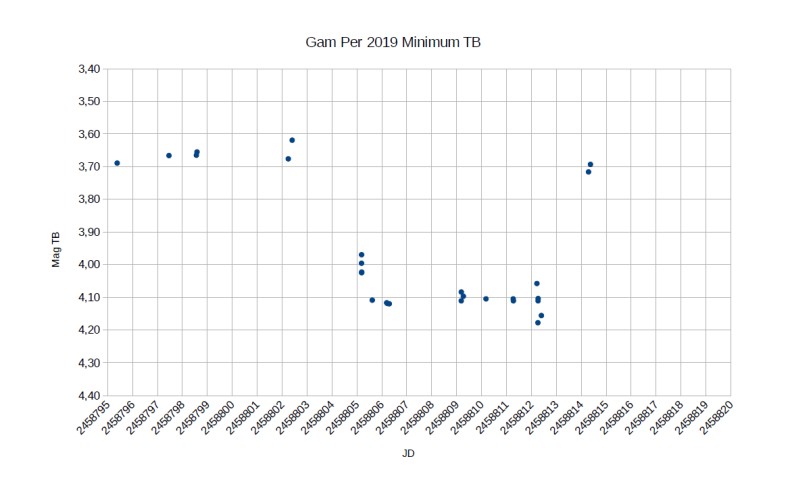 PS: Did not yet manage to transform blue magnitudes TB to Johnson B, so did not yet upload to database.