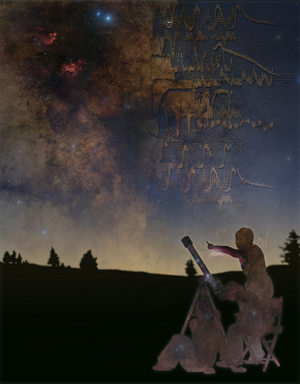 On Feburary 19, 2011 the number of observations in the AAVSO International Database surpassed the 20 million mark. It is fitting that this milestone was achieved during our 100th anniversary. Below is some information about the achievement.

The 20 millionth observation itself was submitted by Josch Hambsch of Belgium. Josch has provided the following story about his background and the observation:

My name is Dr. Franz-Josef Hambsch, but I prefer my nickname Josch. I am in astronomy since more than 35 years. For more than 10 years I have a permanent observatory in my backyard at my home in Belgium. Since then I am into CCD imaging,
for many years doing pretty pictures. However this is rather difficult under my light polluted environment and the weather conditions here in Belgium. Being a scientist also the scientific part of amateur astronomy got my attention. All started with a bright Gamma Ray burst in 2003 (GRB030329) from that moment onwards I started observing variable stars with my CCD camera. The first interest was mainly on RR Lyrae stars, since their variation is nicely visible within a night’s observations (I still need to submit those observations to AAVSO). In Belgium we have a very active group of variable star observers (Werkgroep voor veranderlijke sterren (WVS)), which during the years evolved from mainly visual observations towards nowadays more CCD imaging. As you can imagine, I am member of this organization. I am also member of the German organization of variable star observers (Bundesdeutsche Arbeitsgemeinschaft für Veränderliche Sterne (BAV)) and the French GEOS (Groupe Européen d'Observation Stellaire) group mainly observing RR Lyrae stars. I have now completely changed my interest in astronomy towards variable star observations. Within these organizations I concentrate towards understudied RR Lyrae stars, High Amplitude Delta Scuti (HADS) stars and cataclysmic variables (CV, observations of those are sent to the VSNET and CBA networks). I joined the AAVSO in 2009 after participation in the 98th AAVSO spring meeting in Big Bear, California. I also share with the AAVSO one of the AAVSO-net telescope (W30) as I have contributed the CCD camera, filter wheel and filters for this scope. As, I get lots of data from this scope and my own scopes in my backyard, I am always behind sending data to the AAVSO, so that is why the 20 millionth observation was on GV And from October, 12, 2010. This star seems to show a small Blazhko effect and there are not many observations in the GEOS database (http://rr-lyr.ast.obs-mip.fr/dbrr/dbrr-V1.0_0.php) after 2002. With the submission during the last weekend, I also have submitted more than 150000 CCD observations to the AAVSO database (except GRB030329 (18 observations in 2003)) from 2006 onwards. Many more to come. Last but not least, I would like to thank Patrick Wils for his continued search towards interesting stars to observe, Tom Krajci for his dedication to the AAVSOnet and Pierre de Ponthiere for his software which enabled me to submit the observations in the extended AAVSO format.

Every one of the first 19,999,999 observations is just as important as this one. One can't get to 20 million without standing on the shoulders of those that came before. In fact, over the past century about 7,500 observers have submitted observations to the database.

An informal contest was held to predict the date the milestone would officially be surpassed. We received 14 submissions. The winner was Chris Watson, who successfully predicted February 19. Second place went to Tim Crawford (March 2) and third place to Mike Simonsen (March 3).

Here are the top ten observers, by number of total observations, for each type:

1 The affiliation is that which was provided by the observer.

The illustration was created by Nico Camargo and is available for use under the Creative Commons Attribution-Attribution-Share Alike 3.0 License. Please attribute it to "Nico Comargo and the AAVSO" where possible. A 300dpi version is available by clicking here.