2011 The Centennial Year in Review

The following are highlights from 2011, the centenary year of the AAVSO.

Spring Meeting, May 21-26, Joint meeting with the AAS

The first of two historical meetings this year, the AAVSO 100th Spring Meeting was held as a joint meeting with the American Astronomical Society (AAS) at the Westin Copley Place, Boston, MA. On Saturday afternoon, was the first of several AAVSO Paper Sessions. The AAVSO Spring Banquet was held that evening at AAVSO Headquarters. The AAS Council joined us for this event. After dinner there was a brief award presentation followed by an invited talk by Dr. Nancy Morrison.

Sunday morning was another AAVSO Paper Session followed in the afternoon by a joint session with the AAS Historical Astronomy Division (HAD). That evening was the spectacular AAS Welcome Reception.

The variable star theme continued through Monday with two plenary talks on variable star science as well as 2 AAVSO-sponsored, variable star special sessions, "Astrophysics with small telescopes" and "Variable stars in the imaging era". There were also poster sessions featuring the AAVSO throughout the meeting.


As part of the AAVSO's 100th anniversary celebration all AAS meeting attendees were invited to attend an open house at AAVSO Headquarters on Monday evening. AAVSO staff members were present to give tours and answer questions about the AAVSO's rich history and current activities.

The Centennial Year culminated with the 100th Fall Meeting of the AAVSO in Woburn, MA and at headquarters in Cambridge. It began Wednesday morning with two historical paper sessions featuring papers on women in AAVSO history, variable star organizations around the world and variable star observers. That evening a special, invitation only, banquet was held at headquarters for past and present leadership of the AAVSO. Past and present officers, councilors, committee chairs, volunteers and staff were treated to an evening of fun and recollections topped off with a banquet in thanks for their service to the organization. A special picture taking session took advantage of this once in a lifetime opportunity to get all these people together in one place at the same time.

Thursday morning began at 49 Bay State Rd., as we officially dedicated the new headquarters building, acknowledged the donors responsible for the extensive renovations and dedicated the Tom and Anna Fay Williams Historical Archives, the Dorrit E. Hoffleit Conference Center, and the Rosebrugh Residence and Feibelman Guest Suite. The ceremonies began outside with the unveiling of the newly hung Clinton B. Ford Astronomical Research Center sign and a ribbon cutting at the entrance to officially dedicate the new headquarters. The attendees then moved indoors for the unveiling of special commemorative plaques, portraits and displays, and invited talks on the history of the AAVSO, its former headquarters, Dorrit Hoffleit and the future of variable star research. A light lunch was followed by cake and ice cream. Before the day concluded a time capsule, to be opened at the fall meeting of the AAVSO in 2061, was also dedicated. 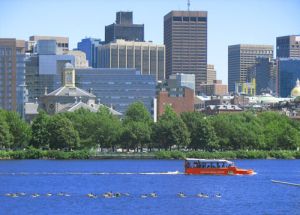 Friday morning opened at the Woburn Hilton and began with the membership meeting, where the Director gave his report to the membership bringing them up to date on the recent progress and accomplishments of the organization. This was followed by some selected readings from the AAVSO Centennial History Book, written by Tom Williams and Michael Saladyga. The authors were then available to sign copies of the book, which were available for sale throughout the meeting. The first of three scientific paper sessions was held in the afternoon. Friday evening was the last historical session, featuring famous AAVSO observers.

Throughout the morning and afternoon on Saturday science paper sessions continued and at 4PM the first formal poster session, a new feature added to the proceedings of AAVSO meetings to come, was held, while a historical picture taking session commenced concurrently on the second floor of the hotel. Pictures of top observers, award recipients, long time members and more were taken, as it is unlikely all these people will be in the same place at once ever again.

The celebration concluded Saturday evening with the annual fall banquet. Dinner was followed by a short awards ceremony and an invited talk from lifetime member and distinguished astronomer, Owen Gingerich.

People attended the meeting from Australia, Japan, South America, the United Kingdom, Europe and Canada, demonstrating the fact that the AAVSO is truly and international organization. 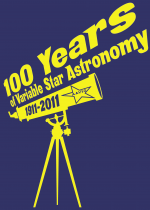 One of the fundraising initiatives this year was the sale of t-shirts bearing the AAVSO logo on the front and a centennial themed picture on the back. We hoped to raise about half the money we expected to spend on centennial activities and events above and beyond the annual budget. Of the 200 t-shirts on hand we sold more than half. The remainder are on sale for $20 each and included free with each purchase of the centennial book. These shirts will not be numbered or autographed by the director like the centennial versions were.

We ran a series of trivia questions based on unique, humorous and sometimes-strange facts uncovered in the process of going through the AAVSO archives in the process of writing the centennial history book, “Advancing Variable Star Astronomy”. Staff archivist Michael Saladyga, selected the 120 or so questions that were posed as multiple choice on the website and a vigorous competition soon began, fighting it out for master of mundane AAVSO factoids.

(The last number is the amount of questions answered correctly)

Our timeline provides details on important dates in AAVSO history. As the calendar marched forward, new entries were added to the timeline, including links to more information of many of the entries. At the end of the year we had a nice timeline of major AAVSO events of the last 100 years. You can read the timeline here.

The June, 2012, issue of The Journal of the American Association of Variable Star Observers (JAAVSO Vol. 40, No. 1) will be a special centennial issue, featuring papers on historical, scientific, and associations topics, and including a section of invited review papers. Papers accepted for publication in this special issue can be found on the JAAVSO page.

The object of this challenge was to observe 100 different variable stars in 100 days. The only rules were:

The rules for this one were simple.

Those who achieved the challenge are listed here and were also mailed a certificate.

It all started early in January as we were closing in on 20 million observations in the database. We announced a contest to see who could predict the exact date and time we would cross that magic milestone. On February 19, 2011 we passed the 20 million mark, which was predicted by Chris Watson. As we raced towards the 2011 finish line, the "obzometer" on the International Database turned over once again as we passed 21 million observations in December.

The AAVSO logo has a long and storied history, but there had been some discussion lately about whether  it was time for it to be updated. So we held a contest to come up with a superior design. We received several worthy submissions, but none of them was deemed superior to the tried and true gold and blue logo we currently use. The judges’ decision not to change the logo was unanimous, but the top three submissions were awarded with a year's free membership in the AAVSO.