The 2016 Spring Meeting in Review

The 105th spring meeting of the AAVSO was held at the Crowne Plaza in downtown St. Louis, Missouri, Thursday, May 4th to Saturday May 7th.  St. Louis was chosen due to it’s location in the middle of the continental United States. Council hoped this would encourage people to attend who don’t normally come to the fall meetings on the east coast. About a quarter of the attendees were first time attendees or people who don’t normally attend the fall meetings in Massachusetts.

Another sign this was going to be a great meeting was the number of people who made it a point to arrive early on Thursday, so they could attend the invited talk by Dr. Horace Smith, Thursday evening. When Horace took the podium the room was full.

Dr. Smith’s talk reviewed the history and our current understanding of pulsating stars, the theme for this year’s meeting. He paid particular attention to RR Lyrae, delta Scuti, and Cepheid variables, and how observations by AAVSO members have provided insight into several questions regarding the behavior of these stars.

Horace Smith’s talk is available to members at: https://www.aavso.org/105th-spring-2016-meeting-talks

Friday morning began with another invited talk by Lee Anne Willson. She discussed mass loss in Mira variables and how this eventually depletes the envelope, revealing the ash from nuclear burning left at the core, a new white dwarf star. The Sun’s eventual devastating mass loss and its effect on the solar system and Earth was then discussed.

The entire day on Friday was devoted to pulsating variables. The paper sessions included talks from professional and non-professional authors. Papers ranged from discussion of delta Scuti, Cepheids and RR Lyrae variables to Semiregular and Irregular variables. During the afternoon session the authors of the posters displayed at the meeting were given 5 minutes to introduce the topics in their posters. Several of these were authored by students.

After dinner, people who had signed up for the field trip to the St. Louis Science Center and Planetarium met in the lobby and then took several cars and vans to attend the ‘First Friday’ event held each month at the science center. 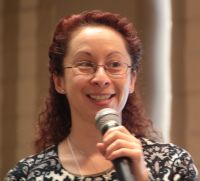 Saturday morning began with the AAVSO Membership meeting. Reports were given by the Secretary, Gary Walker, Treasurer, Bill Goff and Director, Stella Kafka. All these reports are available online for members at: https://www.aavso.org/105th-spring-2016-meeting-talks

Awards were given for observing to both visual and CCD observers as well as three special awards for 25 years of membership to Wayne Clark, Horace Smith amd Lee Anne Willson. 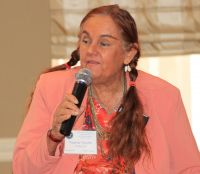 After the coffee break, the first talk of the day was a fascinating invited talk from Dr. Virginia Trimble. She talked about how our perception of what is a planet and what is a universe have evolved over time. From the ancients, to whom the Earth was the Universe, to realizing over time that groups of planets and stars formed galaxies outside our own Milky Way, and finally to our discovering multiple exoplanets and considering the existence of multiple universes. Dr. Trimble received a standing ovation at the end of her presentation. This journey through time and the human imagination is also available to members at: https://www.aavso.org/105th-spring-2016-meeting-talks

Before lunch on Saturday we paused for the traditional group picture with the St. Louis Arch in the background. 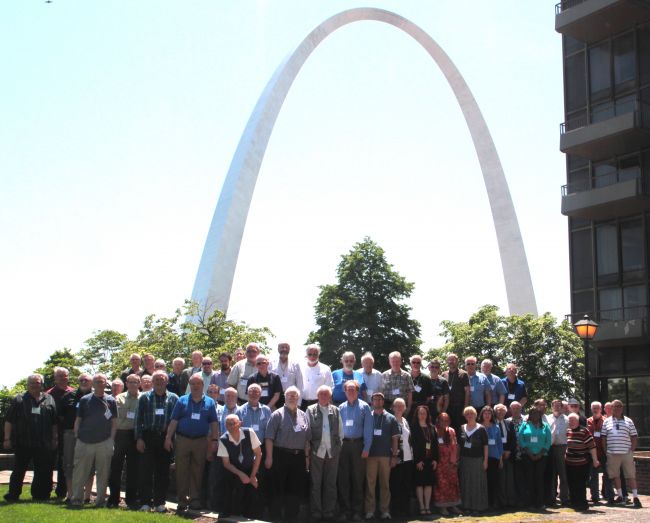 The first talk of the general paper session Saturday afternoon was presented by James Small, President of the St. Louis Astronomical Society. His talk, "The SLAS Library Telescope Program" showed how his society had developed a program to supply specially modified small telescopes to libraries to loan out for free to kids and families in the St. Louis area. Since 2014 they have placed 88 telescopes in libraries around St. Louis and are expanding the program across the river into Illinois.

That evening, people mingled and socialized around the cash bar preceding the banquet. Once everyone was settled at their tables the trivia questions, based on the talks given during the meeting, were presented. After a fine St. Louis barbecue buffet, winners of the trivia contest were awarded prizes and bragging rights and then Stella drew winning tickets for the raffle prizes. The meeting was adjourned at 10pm by AAVSO President, Kristine Larsen.

The fall meeting will be held November 10-12, at the Boston/Burlington Marriott in Burlington, MA. We hope to see you there!