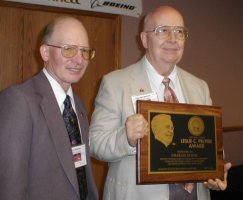 Charles E. Scovil became interested in astronomy at age 10 while vacationing in the Adirondack Mountains in New York State. Since then he has accomplished many great deeds for amateur astronomy while standing in the background just doing what was needed. While serving in the honorary position of Curator of the Stamford Observatory, a wing of the Stamford Museum in Stamford Connecticut, Mr. Scovil pursued visual observations of variable stars in support of the American Association of Variable Star Observers (AAVSO) programs. However, Mr. Scovil put the capabilities of the Stamford Observatory to good use photographing variable star and nova fields for use in drafting finder charts with accurate comparison star sequences. As if the chart drafting weren't enough, Mr. Scovil turned his attention to the long, difficult task of creating the AAVSO Variable Star Atlas which is now in its second edition. He then worked with Christos Papadopoulas to co-author the True Visual Magnitude Photographic Star Atlas, vol. 3. These tools have proven invaluable to astronomers, both professional and amateur, for many years.

Mr. Scovil is a product of the Montclair, New Jersey Public Schools and holds a degree in Geology from Lehigh University, Bethlehem, Pennsylvania. His other hobbies are photography and archaeology. Mr. Scovil has taught astronomy at the adult level in several towns in Connecticut and taught astronomy at the grade school level for four years in Greenwich, Connecticut.

Mr. Scovil's other awards include the Stellafane Blue Ribbon for a special folded refractor in 1966, the Commendation of the North East Region of the Astronomical League in 1974, the AAVSO Merit Award in 1981, and the AAVSO Director's Award in 1999.

It is with great pleasure that I present the Leslie C. Peltier Award to Mr. Scovil because his efforts have benefited all of us in this wonderful hobby of astronomy. His charts and atlases have been used by amateurs and professionals for the greater good and greater knowledge of society. His tremendous efforts for the advancement of astronomy make Charles E. Scovil more than worthy of this award. Congratulations Charles!