The Clinton B. Ford Observatory 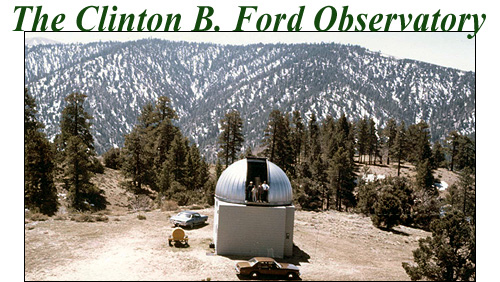 —Notes by Msgr. Ron Royer, with additional information compiled from the AAVSO Archives

The Ford Observatory and the AAVSO

From the start, Ford envisioned an active co-operation between the Ford Observatory and the AAVSO. The original Mount Peltier Association members were all AAVSO members as well.

Among the many projects and activities at the observatory over the years were: visual observations of variable stars; astrophotography; a program of making photographic plates of star fields for new AAVSO charts; star parties; nova and supernova search programs; CCD/computer imaging of planets and deep sky objects; photometry; asteroid searches; comet observations; visual planetary observations; and many more. All observations were recorded and reported to the proper agencies.

The spirit of co-operation continues today as several users of the Ford Observatory are making visual observations there for the AAVSO.

Location: on Mount Peltier (Hill 7473), near the eastern end of Table Mountain, San Gabriel Mountains, part of the Angeles National Forest, in Wrightwood, California (near the northern edge of metropolitan Los Angeles). Part of Table Mountain (not Mt. Peltier itself) was used for several years by the Smithsonian Astrophysical Observatory (SAO) for making solar observations, and was once considered for the SAO 200-inch reflector. At one time SAO's facilities were about 3/4 mile west of Mt. Peltier (as of 2012 they are no longer there). [ Editor's note: According to James W. Young, retired longtime JPL Table Mountain Observatory resident astronomer, Mt. Peltier itself was not used by SAO for making solar observations, nor was it considered for the 200-inch site; the text of this paragraph has been edited to reflect these corrections. Thanks to Jim for helping clarify our history! For more information on the history of Table Mountain and its astronomy resources, see the website of James W. Young, at http://www.youngsphotogallery.com/TMOHistory.html.]

Instrument: 18-inch, f/7 Newtonian reflector (built mainly by Clifford Seauvageau of Detroit, Michigan), used for variable star observations by AAVSO member Claude B. Carpenter, of Menifee Valley, California. Donated by him to the Ford Observatory when seeing conditions at his location became poor due to development.

The Mount Peltier Association was organized on October 23, 1964, by Claude B. Carpenter, Clinton B. Ford, and Larry C. Bornhurst--all active AAVSO members at the time. Leslie C. Peltier was named an Honorary member.

The Mount Peltier Association was a name coined by Clint Ford for those who took part in the original observatory installation. We were later asked by the U.S. Forest Service (the observatory was on National Forest land leased from the Forest Service) to feature the name "Ford Observatory" with the idea that the name would stimulate more public interest. Clint, however, never used that name for us, preferring "Mount Peltier Association"—the actual group of members, instead of "Ford Observatory"—the name for the facilities.

The observatory was built for and by serious amateurs mainly to do photoelectric work on variable stars and to have an observatory close by the Los Angeles area. It has been used for various targets of opportunity such as asteroid searching methods and astrophotography mainly by Ron Royer.

Claude B. Carpenter, owner of the 18-inch f/7 Newtonian. Avid AAVSO member and astrophotographer from Michigan. Moved to Southern California, his big scope located in the Menifee Valley. We called him Claudius, THE EMPEROR.

Clinton B. Ford, financed the Ford Observatory project. Flew out 1st class twice a year on American Airlines to follow Miras through minimum. Could have done that from Wilton, CT, if he had a CCD camera! But then he would have missed sitting next to Dolly Parton on one trip!

All of these men are deceased, except for Larry Bornhurst. After leaving Kitt Peak, Larry bought a yacht and sailed from California through the Panama Canal up to Connecticut, and visited Clint Ford unannounced. Larry did great things and then moved on to others, e.g., doing the whole Baja Peninsula Highway #1 in one record-setting endurance run on a Harley-Davidson so fast that the Mexican authorities didn't know what flew past them. No paperwork or permits that way. Larry now lives in the Tucson area and works at observatories, even at the Vatican. Thanks Larry, without you there would have been no Ford Observatory!

Scott Craig, and his friend Chris McHale. Scott was a Disney Mickey Mouseketeer. When we had open house observing for nearby summer camps, and he was with us, the young girls always recognized him without being told his name! Observing stopped and autographs began.

Mike Jones, student from Texas at Citrus College precision optics courses in Glendora, CA. Still in the optics field after taking top honors at the College.

Charles T. Kowal, Caltech astronomer who got to know us at Ford by doing a possible SN confirmation for us in 1973 with the 200-inch scope at Palomar. Proved false, but Ford got an autoguider from Charles as he was making one also for his use in long guiding sessions. He needed one, discovering over 100 SNae, 19 asteroids, several comets, and 2 moons of Jupiter.

Marty Poissant, young astrophotographer and videographer from Long Beach, CA. Very frequent observer at Ford. Went on to be a Hollywood TV technician and program director.