Eclipses During the 2010 Eruption of the Recurrent Nova U Scorpii 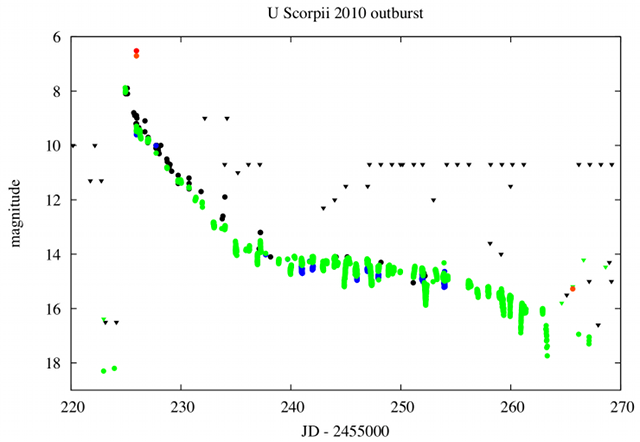 The AAVSO is pleased to announce that a massive collaborative paper on the recurrent nova U Scorpii's 2010 outburst has finally been accepted to the Astrophysical Journal!  The project leader, Dr. Bradley Schaefer (Louisiana State University) informed all of the coauthors of the paper's status on Thursday August 4, 2011; among the list of coauthors on the paper are more than a dozen amateur astronomers who contributed intensive time-series observations key to the paper's aims.

You can access a preprint of this paper at arXiv.org.

The project to observe U Scorpii in 2010 was a wonderful example of what professional-amateur collaboration in astronomical research can do.  Thanks to vigilant monitoring of U Scorpii by the amateur community, the outburst was detected within hours after it occurred on January 28, 2010.  The AAVSO community continued its critical role in the endeavor by contributing over 14,000 observations of U Sco throughout the outburst and subsequent decline, and the result is the paper that is now accepted to the Astrophysical Journal.  Although the focus of the paper just published was on the eclipses observed in U Scorpii, the observations also helped uncover new phenomena like the as-yet unexplained flares and dips in the light curve.

The AAVSO is proud to be a part of this work, and we congratulate Dr. Schaefer and all of the many participants in this project over the past 18 months.  And to all AAVSO observers who contributed data to the light curve, well done!