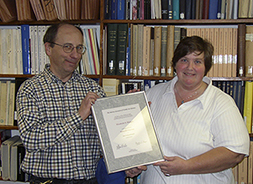 Elizabeth started working at the AAVSO in 1979 after graduating with a degree in Astronomy from Smith College in Northhampton, MA. She began as technical assistant to Director Janet Mattei. Over the next 25 years the variety and number of her responsibilities grew. In addtion to her current position as senior technical assistant and associate editor of the JAAVSO, since Janet's illness, Elizabeth has been serving as the AAVSO's Interim Director.

In honor and recognition of Elizabeth's 25 years of hard work at the AAVSO—especially the past year as interim director—she was presented with a certificate by AAVSO staff person Mike Saladyga. The certificate reads:

The Officers, Councilors, Members, and Staff of
the American Association of Variable Star Observers
extend their heartfelt appreciation and sincere thanks to

on the happy occasion of her
Twenty-fifth Anniversary
as
Senior Technical Assistant
at the Association.

In addition to the plaque, we invited the full staff, as well as Elizabeth's mother, over to headquarters for a surprise celebratory lunch. The staff gave Elizabeth two gifts in appreciation— both for the quality work that she does and for the warm and caring friend that she is to us. One gift was an onyx pedant with silver trim and the other was a gift certificate for two to have brunch aboard The Odyssey, a cruise ship that sails around Boston Harbor. We hope she will stick around for 25 more years!