The Solar Division is pleased to receive for publication a description of the improved gyrator II VLF receiver developed by SID Technical Coordinator Art Stokes (A-62). The original gyrator VLF receiver was described by Mr. Stokes in Communications Quarterly magazine in 1994. Further experimentation and comments from many SID observers who built the original gyrator have lead to the improved gyrator II design. Periodically as relevant article submissions are received, the Solar Division will publish these articles in special issue technical bulletins. All Solar Division observers are encouraged to submit articles pertaining to solar observing technique, equipment, and data analysis for consideration.

The original gyrator tuned VLF receiver has been previously published 1, 2. Many of the receivers have been built and used successfully for monitoring SID's since 1994. Some users of that receiver have problems with the receiver going into oscillation when the gain was increased to a high level. It occurred to me that the problem could very well be a result of the gyrator tuning function of the circuit being too close in proximity to the amplifier function, inasmuch as both functions are on the same integrated circuit chip.

In this new circuit design, I have separated the two functions by using two dual op-amps in place of the original quad op-amp. The two op-amps are separated on the circuit board to minimize interaction. Another advantage here is that I have selected the TLO82 dual biFET op-amps which are available from Radio Shack. The original 1436 quad op-amp was not easily available.

The amplifier function is quite different from the original precision rectifier arrangement. The new circuit uses the two amplifiers on the IC with capacitor coupling. The first amplifier is set up with a variable gain of zero to one hundred. The second amplifier has a fixed gain of about thirty. This gives a total gain of about three thousand which is generally enough for our purpose.

The rectifier-integrator has been changed to a straightforward two diode rectifier arrangement that has been used in previous receivers. This works well here. An optional 5 volt Zener diode may be placed across the recorder output to limit any voltage surge that could result from a high gain setting and strong signal input.

The power supply is designed around a twelve volt center-tapped transformer available from Radio Shack. Two diodes and two capacitors form a dual voltage power supply with approximately ten volts plus and minus. The small amount of ripple on the DC voltage does not affect the performance of the receiver.

The tuning of the gyrator is very sharp. The tuning dial must be turned very slowly to avoid missing a station signal. The half power bandwidth is a little over 200 Hz. This high Q is only obtained when using high Q polypropylene capacitors in the gyrator. Silver mica capacitors work fairly well also. 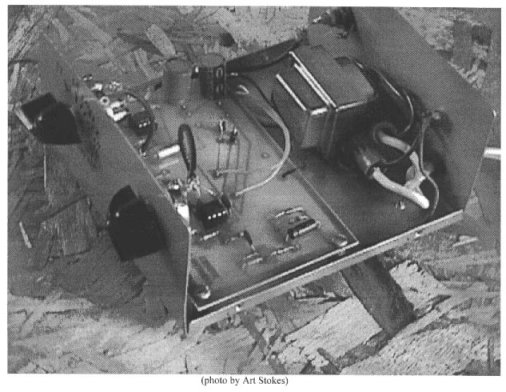 The recorder output is sufficient to drive a few milliamperes to various types of recorders and also enough voltage for A/D converters for computer recording.

A printed circuit board is available from FAR Circuits. All parts are available from Radio Shack with the exception of the polypropylene capacitors. These capacitors can be obtained from Digi-Key and Mouser Electronics. I will also supply the capacitors for $3.00 post paid.

Wires to the two potentiometers and the recorder connector must be cut to length and soldered in place before mounting the circuit board in the cabinet on standoff supports. The antenna signal lead to the BNC connector must also be in place. Holes in the cabinet for the two potentiometers, the BNC connector, the recorder connector, and the power cord must be made before placing the circuit board. All the diodes must be mounted in the correct orientation with regard to polarity. The marked band is always to the plus direction. It is advisable to use shielded audio cable or small coax for the connections to the potentiometers and to the BNC antenna connector.

I have found the Gyrator II circuit to be very stable with the advantage of increased gain without oscillation. The increased output drive is sufficient for recorders that require a few milliamperes. A further benefit lies in the availability of most parts from Radio Shack.

My sincere thanks to Casper Hossfield (A-05) for many fruitful suggestions in the design of the final circuit. His assistance was very helpful in arriving at a much improved VLF receiver.