The long period variable R Aquarii is an extremely interesting system. Its type is both Mira (M) and symbiotic (ZAND) - R Aqr is a close binary system consisting of a hot star and a late-type star, both enveloped in nebulosity. In the case of R Aqr, the late-type star is a Mira. As a result, the very interesting light curve shows not only the Mira pulsation but also eclipses as the two stars interact.

The last eclipse of R Aqr was in 1978. The next eclipse is predicted for 2022, but may be early. The current behavior of R Aqr (see light curve below) suggests that the eclipse, which lasts for several years, may either be beginning or its beginning may be imminent.

The AAVSO will be announcing an observing campaign on R Aqr in the near future. For more information on this unusual close binary, please see our Variable Star of the Season article on R Aqr, written in 2003 by AAVSO Technical Assistant Kerri Malatesta. Please note that this VSOTS article includes a long-term AAVSO light curve for R Aqr. 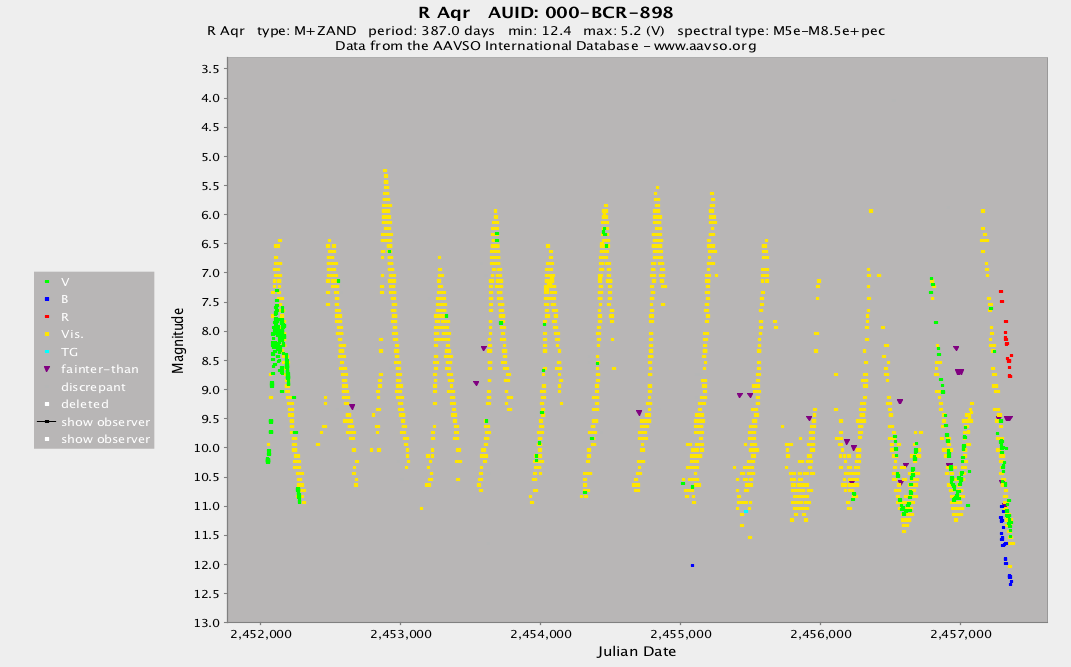 AAVSO light curve of R Aqr, JD 2452000-2457400 (March 2001 - December 2015). 209 observers worldwide contributed 3400 observations of R Aqr to the AAVSO International Database for this interval. Note that this light curve overlaps and extends the long-term light curve shown in the VSOTS article cited above.