Here we hope to answer some of the questions observers ask about YSOs. If there is anything that isn't covered in the points below, why not drop me an email?

What is the T Tauri Wind? 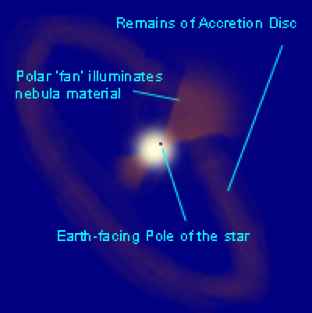 Comparisons are often made between how stars grow and how humans grow. Thinking of YSOs as baby stars, it's tempting to say that stars suffer from wind as well! But it's nothing to do with flatulence. It seems that it's an integral part of the star formation process. What happens is that as the star draws down gas from the accretion disc it grows to a point where pressure causes the star to 'turn on' by fusing Hydrogen. The radiation pressure blows a great deal of the star's mass out of its poles (the points of least resistance) and this is the T Tauri wind. These jets escape in the form of 3-dimensional fans (right) which is why many YSOs appear to be attended by fan-shaped nebulae; the nebula is not actually that shape, it's just that parts of it are being illuminated by the 'T Tauri fans' which take various forms depending on how they are presented to us. T Tauri winds lead nicely into the next question... 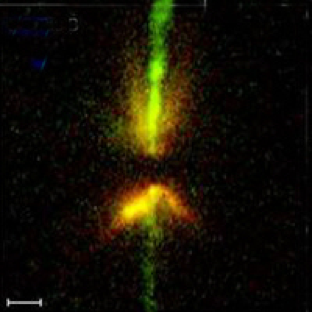 The polar jets aren't content to rest on their laurels - they have interesting effects on the surrounding environment as well. The energetic material, and the radiation, blasts into the gas cloud from which the star formed, and can actually set off more star formation. These jets can be several light-years in length and many are visible to us. These are called Herbig-Haro Objects after the astronomers who first called attention to them. Sometimes we can see the whole thing - the dark disc (no longer hot enough to shine but still opaque enough to hide the actual star) the polar jets and an illuminated nebula. The picture here is the environment of DG Tau (we have a chart for it!) and the scale at bottom right is 200 AU, which gives you some idea of the size of the disc. Note how the brightness of the 'fans' falls off with distance. Here we are looking practically equator-on to the system. A google search for images of H-H objects will quickly demonstrate that they come in all shapes and sizes, since nearby stars - which may themselves be forming - can affect the shape of the jets.

Why should I observe them?

Lots of reasons:
They are interesting, and even exciting! Some show extremely rapid variations, every bit as rapid as U Gem stars, sometimes even more so.

Professional astronomers are interested in them. YSOs can provide most of the information about how planetary systems form, which naturally has implications for the search for exoplanets, life in the universe, and so on.

But aren't they faint and obscure? I've only got a 6" newtonian!

Some are, of course. But with your 6" scope you could observe some really interesting and active stars like CQ tau, RW Aur, YZ Cep and many others. AB Aurigae is visible with binoculars at all times!