April’s LPV is V Hydrae (V Hya), a carbon star Mira that is exhibiting evolutionary changes that are rapid enough to be detected and followed in human lifetimes. V Hydrae’s light curve reveals a periodicity that is likely due to it being a Mira pulsating star with a much longer superimposed period that is likely due to outflows from the stellar envelope that interact with a binary companion star. These phenomena contribute to much deeper minima at intervals of about 17 years than would be expected from a Mira variable.

Stellar evolution is excruciatingly slow when compared to most other time scales, particularly those of human lifetimes. This makes it quite frustrating to those who study the subject and have to endure the reality that observational evidence of stellar birth through death is difficult to detect. However, there are rare occasions when a star encounters a stage of evolution that proceeds much faster than usual, and this can be studied in decades or years. Finding such stars is a boon to astronomers and astophysicists who, through observation, can learn what is going on and try to tie this knowledge to a star’s overall evolution. Variable star observers have opportunities to greatly contribute here by adding their brightness measurements to the light curves that are much used by the professionals studying these stages.

V Hya is such a star. Its light curve behavior has led to recent studies that have resulted in some interesting conclusions about what is occurring with this object and its evolutionary state, and what this implies for other highly evolved stars of similar mass. This is ultimately due to the observations by AAVSO members and other variable star watchers. V Hya is well worth adding to one’s observing program and continuing observation.

V Hya offers a rare opportunity to observe the behavior of a star near the end of its evolution on the asymptotic giant branch (AGB). Because of the relative rapidity of this behavior it is difficult to find such stars. So, we must take advantage of what V Hya is telling us while we can.

15’ 0” (J2000)) was suspected of variability in the early 1870s; this was confirmed shortly thereafter. The magnitude range was estimated to be 7 to 8.5 with a period of about 535 days. In 1905 the magnitude range remained the same but the magnitude was decreasing, i.e., becoming fainter. In 1908 the star reached a deep minimum magnitude of 12, then began to recover and gradually brightened. The period remained the same during this minimum as when brighter. Other deep minima during these early years of observation occurred in 1924-26, 1942-43, and 1959-63. Data is scarcer but there is an indication of a deep minimum in 1891. These occurred at intervals of about 17 years. (Mayall 1965)

Today V Hya is classified in the General Catalog of Variable Stars (GCVS) as a semiregular pulsating variable of type SRa. It exhibits a pulsation period of 530

30 days. This is rather long for most stars of this type but because of the regularity of this period and V Hydrae’s status on the AGB this object is more properly classified as a Mira. The visible brightness amplitude due to pulsation is 1.5m. There is a much longer superimposed periodicity of 6160

The star’s effective temperature (Teff) is 2650K. Its bolometric luminosity is approximately 1.4 x 104 solar. Its distance is estimated at roughly 500 pc.

V Hya has a circumstellar envelope that may be somewhat flattened, and it exhibits a strong, fast stellar wind (and thus a large mass loss rate). Because of this V Hya may be in an early stage of evolution off the AGB. The star then would be in a pre-planetary nebula formation stage (Knapp et. al. 1999). This makes it a star of great interest for continued observation and study.

V Hya has two companions in a multiple star system. One is a 11.0m K0 type giant at a distance of 46” and the other is an unseen star with a period of, interestingly, 8.5 years (half of 17!) (V Hydrae Wikipedia).

Figure 1 shows V Hydrae’s light curve as derived from the earliest observations in the AAVSO database to February 2017. The curve includes observations dating to about 1905 and continuing to the present. The star has been fairly well observed since about 1920. The curve is generated using AAVSO’s enhanced light curve generator (enhanced LCG), an online tool for observers at AAVSO’s website.

There is notable scatter in the data due at least to the Purkinje effect (the changes in the eye’s response to color under low light levels; a very red carbon star will look brighter the longer it is observed and this makes accurate visual estimates with other color comparison stars difficult).

Even a casual examination of the curve reveals why this star is so interesting. Most years V Hya shows rather typical Mira star behavior although its period of 530 days is longer than usual for most Miras (periods of around 300 days). Also, the magnitude range of its variation is largely the same. What are noteworthy are the deep minima that occur at intervals of 17 years. These minima do not reach the same magnitude each time but are still quite a bit fainter than those at less than 17 year intervals.

The star’s fading and recovery of brightness is abrupt and fast, in step with the pulsation period of 530 days. Indeed, this period does not seem to be affected by the deep minima occurrences. 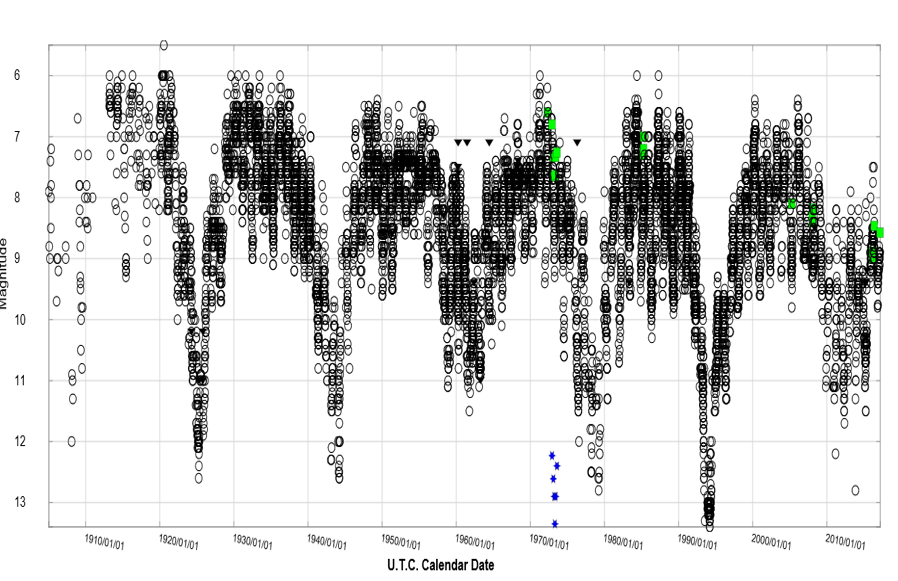 Fig. 1. The complete light curve of V Hya from all AAVSO data. For convenience the timeline is in calendar date, not the usual Julian Date.

Figure 2 is the AAVSO light curve from 1960 to the present. It shows more detail than figure 1 of the pulsation period and the last four deep minima.

Fig. 2. The light curve of V Hya from 1960 to February 2017. The magnitude variations can be seen in some detail. Again, the time axis is presented in calendar date.

The more recent light curve is presented in Figure 3. The data covers the present time and goes back about 750 days. This curve, between deep minima, illustrates the behavior of a “normal” long period Mira. The green data points are of photoelectric or CCD photometry observations (as also in the previous curves). Despite some data point scatter (and easily excluded from analysis) visual observations do a rather good job of following the variations.

The noteworthy behavior of V Hya is the deep minima that are seen in the light curve about every 6200 days (17 years). Similar behavior – that of a long superimposed variation on a Mira variable – is seen in a few other Miras also (e.g., CT Lac and RU Vir). However, these other stars have not been observed as long as V Hya. Thus, it is not known how periodic these variations may be.

Current research strongly suggests that at least a partial cause for V Hydrae’s and other similar Miras long period variations of dimming is due to a considerable outflow of material from the star as each begins the early stages of a “superwind” that marks the transition from the AGB to the post-AGB phase of evolution (Knapp et. al. 1999, Templeton et. al. 2014 and Willson 2000). Studies of V Hya at other wavelengths, primarily at millimeter wavelengths have revealed the large outflow of cool gas from the star’s outer layers. Thus, the changing circumstellar environment due to rapid evolution is also a factor in the variable’s behavior.

Because of the 17 year periodicity, though, researchers suspected something else in addition to gas outflow from the star is causing it.

Researchers began observing V Hya in the 1980s to learn more about the star’s circumstellar environment. Their observations have been principally in the millimeter wavelengths that allow them to study molecules in the outflow such as CO. One of these research groups, led by R. Sahai of the NASA Jet Propulsion Laboratory, discovered “blobs” of gaseous material that have been apparently ejected from V Hya. These blobs (or “cannonballs” as they have been described) move at high velocities and the outermost ones are were ejected approximately 400 years ago. The “cannonballs” look to have been “fired” at intervals of 17 years. The next step was to discover the mechanism by which the gas blobs were “fired” by V Hya.

Sahai et. al. recently published the results of their work to find the mechanism. They propose V Hya has an unseen companion star with an eccentric orbit and a period of 8.5 years. The companion has an accretion disk around it made up of V Hya’s outflow. At the companion’s closest approach to V Hya it rapidly accretes the primary’s outflow. To maintain its stability the disk ejects matter (the plasma “blobs”) along the disk’s axis. If the blob is ejected to the “front” of V Hya (in the general direction of our line of sight) it is dimmed. However, the disk is believed to wobble somewhat with an 8.5 years period and that leads to the ejection of matter “behind” so that the primary’s light is not appreciably faded.

This theory fits well with observations of many planetary nebulae and their frequently seen complex structure. Current thought is these structures are caused by companion stars interacting with the mass outflows of the aged primaries. Accretion disks gather up this mass and eject it into space in various patterns apart from that of the primary alone. V Hya indeed looks to be at the beginning stage of forming a planetary nebula and becoming a white dwarf and at the end stage of a pulsating red carbon giant on the AGB. 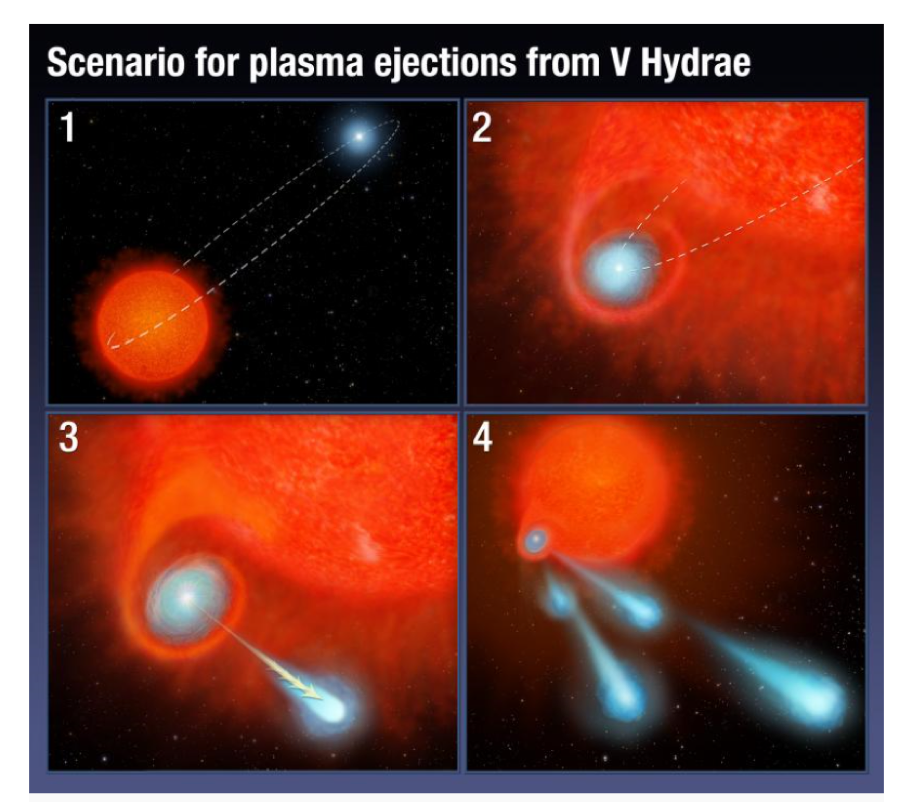 Fig. 4. Graphic illustrating V Hya and its companion ejecting plasma  “blobs” into space at 17 year intervals via an accretion disk around the companion. Courtesy NASA and the Jet Propulsion Laboratory, 2016.