RV CEN is a carbon-rich Mira star in the southern hemisphere, and is included in the LPV program. Centaurus may have a few more interesting stars within its boundary, like R CEN and T CEN, but since you’re likely to observe those stars, why not add this one to your list as well? RV CEN, like many of the stars I’ve written about lately, has recently seen a dip in visual observers paying attention to it. For the past five years, four to six observers per year have monitored the star; however, the total number of observations per year has declined from 90–110 per year in 2016 through 2018, to only 34 and 47 for 2019 and 2020, respectively. Being a relatively bright star of 7.0–10.8 magnitudes, it should be easily within reach for observers with modest equipment. Hopefully a few more observers will jump in and join the party.

Eight program stars are located in Centaurus. R CEN and T CEN are by far the most observed. RV CEN is a distant third in terms of total number of visual observations.

In the chart below, RV CEN is circled in red, and the remaining LPV program stars for the constellation are circled in blue. I was surprised to find there are no LPV program stars in Lupus or Crux. BH Cru (circled in green) is an extremely interesting star and is tagged in VSX as a LPV southern legacy star, but not a LPV program star. This oversight is something I may need to change. Read more about BH Cru at https://www.aavso.org/lpv-month-june-2017, and make sure it is also in your observing program. 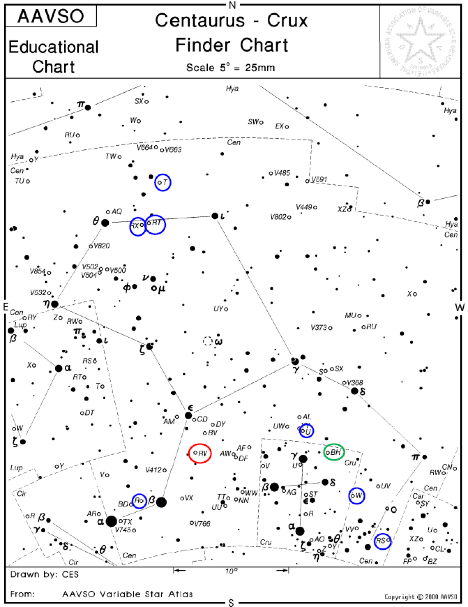 AAVSO observers have monitored this star since December of 1918, logging a total of 11,225 observations. 97% of the observations in the AID are visual. The top three observers of this star account for roughly 35% of the total observations. The top two observers, Reginald De Kock (DK) and Albert Jones (JA), both regularly observed the star from the 1930s into the 1970s. The number three spot is held by the prolific visual observer Peter Williams (WPX), who has logged just over 1,000 observations of this particular star since the 1970s. (Peter provided a recent LPV of the month on a forgotten Mira in Crux (https://www.aavso.org/lpv-month-march-2020-SSCru).

RV CEN’s light curve is fairly consistent in its cycles for a carbon star (its last 10 cycles are shown below). The light curve’s consistency may have to do with the star’s thin dust shell. Whitelock et al. (1997) studied mass-loss amongst 11 high amplitude carbon variables, including RV CEN, in the near infrared. They found that carbon variables with thin dust shells, such as RV CEN, exhibited much smaller variations than those with thick dust shells.

RV CEN is clearly monoperiodic. Utilizing the entirety of visual data in the AID, the star’s period has varied between 457 and 434 days, with an average period around 446.5 days.Such period variations are common amongst carbon stars like RV CEN. This can pose interesting questions around what period should be listed in catalogs. The GCVS lists RV CEN’s period at 447 days, which is around the long-term mean period. VSX lists the period as 457 days because that period was derived from ASAS-3 data taken when the star was near a period maximum. Similarly, Mattei & Foster (2000) found a 445-day period when analyzing visual observations from the AID between 1961 and 1995.  If we choose a more recent epoch to derive the period, the resulting period would be closer to 435 days. So, what period should be listed in VSX? It’s an interesting discussion I’m currently having. Either way, the important thing to watch for is if the mean period is changing, which does not appear to be occurring with RV CEN. 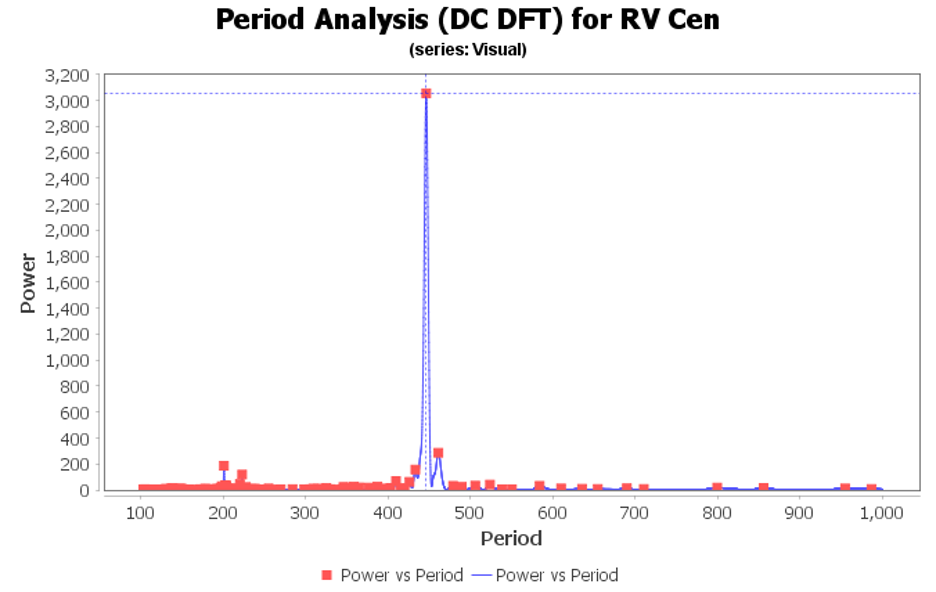 However, RV CEN’s mean amplitude does appear to be changing over time.

RV CEN is worthy of future monitoring. We have a good history developed for the star, to which we can compare future data to better understand evolutionary trends in these late-stage stars. If the current level of visual observation is not maintained, the past 100 years of data won’t be of much utility, and that would be a shame for those past observers who have dedicated so much time and energy to develop our current foundation.