L2 Pup is a bright and semi-regular star (SRa) that was discovered by Gould back in 1872.  The AAVSO has observations of the star dating back to 1891 and over 600 observers have made nearly 30,000 observations since that time.  Certainly in the southern hemisphere this is one star which has always been promoted as a good target for beginners so many experienced observers have a soft spot for L2 Pup!  However as we shall explore in this article, L2 Pup is no ordinary beginner’s star and has revealed many surprises over the last 100 years or so which has rewarded observers who have maintained a long term monitoring program.

There is voluminous information on L2 Pup in the scientific literature that has appeared over the years.  This article is not an exhaustive review of this information.  Rather I’ve selected to focus on a few of the key features and events that we have witnessed since discovery.  I also have included links to a number of the more interesting scientific papers which discuss this star.  Some of the basic (and interesting) facts relating to L2 Pup are detailed below:

Alexander Roberts in South Africa established that the star has a pulsation period of 140 days based on the first 20 years of observations after discovery.  Whilst there has been some minor variation in this period, it is reliably stayed within a range of 135 to 145 days since discovery. David Benn has analysed the AID observations via a WWZ transform analysis and the graphic below plots the period versus time.  This clearly shows a meandering of the period in the range between 135 and 145 days.  There appears to be some interesting behaviour with regards to the period around JD 2454000-2454500 (2006-2008) where for a short time the period reduced to around 125 days but I have not investigated this further. 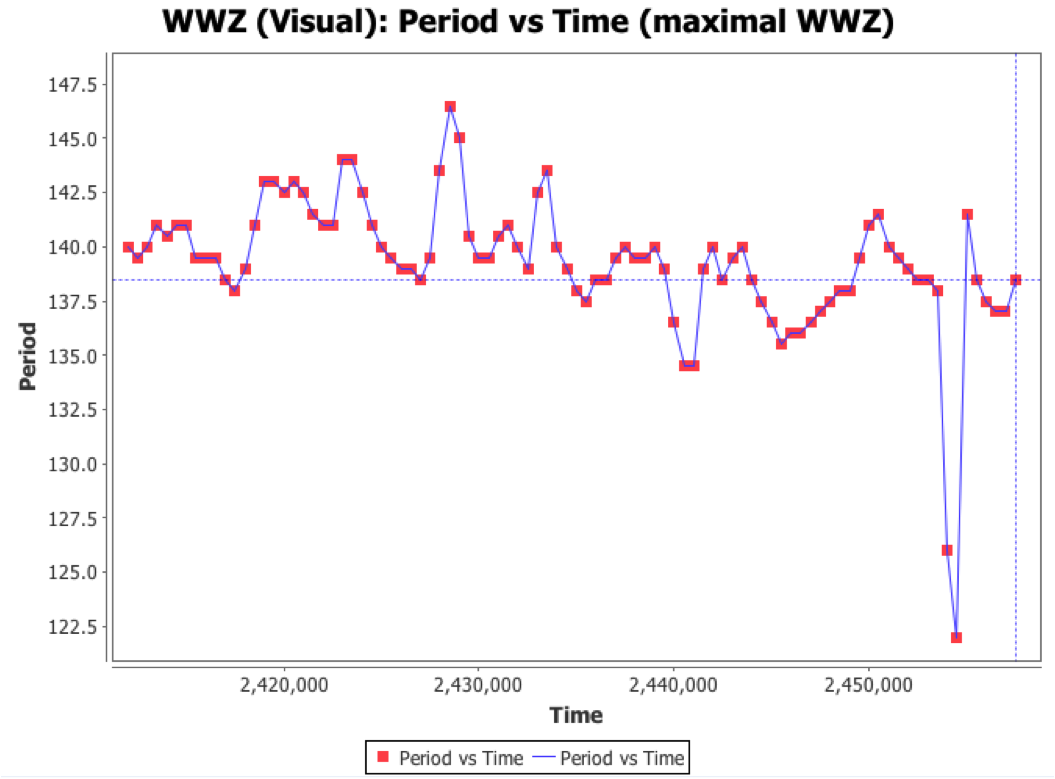 The same cannot be said for the brightness and amplitude!  The figure below presents all of the observations contained with the AAVSO database since 1891. 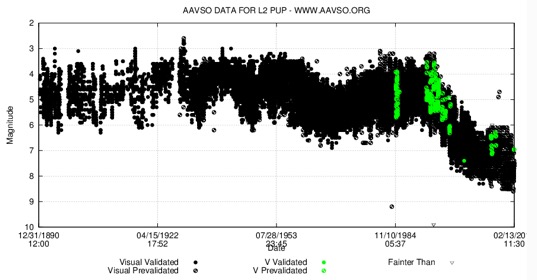 From discovery until the early 1990’s, the maximum and minimum magnitude hovered between 3-4th mag and 6th mag respectively and this range was relatively stable.  The volume of observations increased after 1945.  However within this period it can be seen that a longer term fade started to occur around 1960 which then recovered by about 1975.

Commencing around 1994, a more dramatic fading event started and as can be seen from the graph, the star has never recovered to it’s pre-1990’s brightness range.  It’s now lucky to reach mag 6.5 at maximum and it’s around ag 8.5 at minimum.  This is a significant change in the star’s behaviour over a relatively short astronomical timescale.

The fact that the period of pulsation has more or less been stable since discovery rules out intrinsic changes within the system.  Therefore it is believed that the long term brightness variations are due to changes in the line of sight opacity of the dust disk surrounding the system.

Evidence for this possible explanation for it’s long term behaviour came from recent intensive monitoring of the star with the VLT in Chile starting in 2014.  It was possible to directly image the dust band in our line of sight and it was shown to be of an irregular shape.  The rotation of the disk therefore is likely to cause a time variable occultation of the pair of stars.

VLT observations are ongoing and are showing the dust disk morphology to be changing rapidly with time.  Ongoing monitoring of the variations will allow astronomers to plot a dust density map.

What is further intriguing with this star is the short time scale variability in amplitude it has shown.  This includes periods where the amplitude is significantly reduced (to less than 1 magnitude).  Since July 2015 it has been displaying this sort of behaviour, and as far as I can tell, this appears to be the most extreme example of this reduced amplitude since it’s discovery.  This can be seen in the lightcurve below.  The 140 day period is apparent throughout, however from about July 2015 onwards the amplitude has been less than 1 magnitude.  In fact between July and December 2015, the amplitude was only around 0.5 magnitude.

This reduced amplitude means that the occulting dust disk material density at the moment is compensating almost exactly for the intrinsic brightness variations of the star. 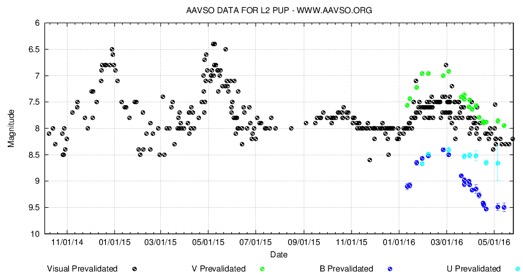 I’ve done a little bit of digging through the AID to see if there have been other times when the amplitude was similarly greatly reduced.  I may have missed some, and I invite readers to identify others, but there does appear to be similar events around 1922 and 1937-1938 as can be seen in the figures below.  Similar events seem to have occured in 2007-2008 as well. 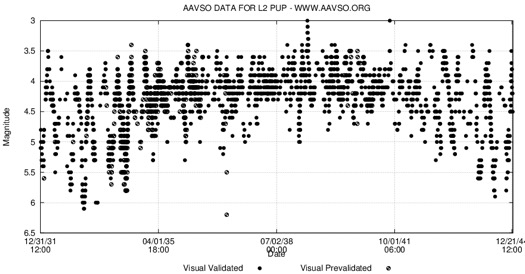 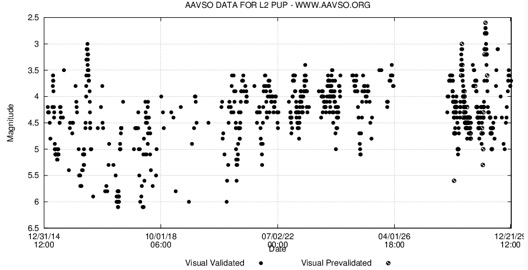 This is a fascinating star and I would encourage anyone to follow it.  V, U, B and IR measures are especially valuable which are helped by the relatively bright state of this star.

Where to Find It

Ok, I apologise to the northern hemisphere observers!  It is at declination -44 degrees!  However it is an easy star to locate and observe with even 50mm binoculars or a 50mm finder scope all that is required to observe the star through it’s full brightness cycle. It’s located approximately 3 degrees west of the star sigma Puppis and is currently high up in the southern hemisphere (apologies again!) evening sky.  We will lose sigh of it in the next few months when it goes into conjunction with the sun so any observations now are especially valuable. 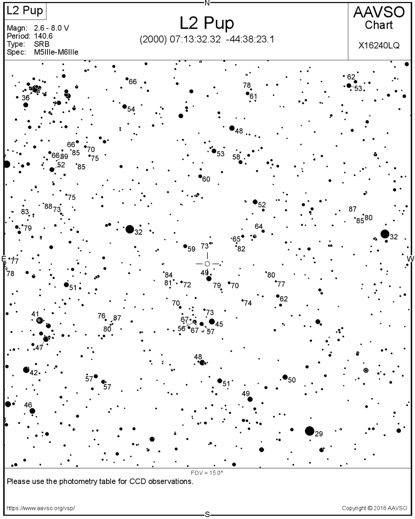