R Lep is a bright Mira that was discovered by the British astronomer J.R Hind back in 1845.  It became known as Hind’s Crimson Star due to the striking red colour of the star.  Hind described it as “resembling a blood drop on the background of the sky”.  There are observations in the AAVSO AID dating back to 1853.  Over 22,000 observations are in the AID as can be seen in the light curve shown below which displays all observations in the AID.  It is one of the Legacy LPV Program stars.  It was well observed starting from 1853 until about 1879.  There are breaks in the data where no observations were made in the period 1879 to 1893 and then between 1895 to 1905.  It has been well observed since the establishment of the AAVSO in 1911.

The last light curve indicates that there is a reasonable degree of scatter associated with visual observations of R Lep.  This is due mainly to the very strong reddish colour of the star which is easily apparent throughout it’s full light cycle.  Only a few B measurements have been made of R Lep as reported in the AID.  However B-V is typically between 4 and 5 magnitudes which indicates a very cool red star. 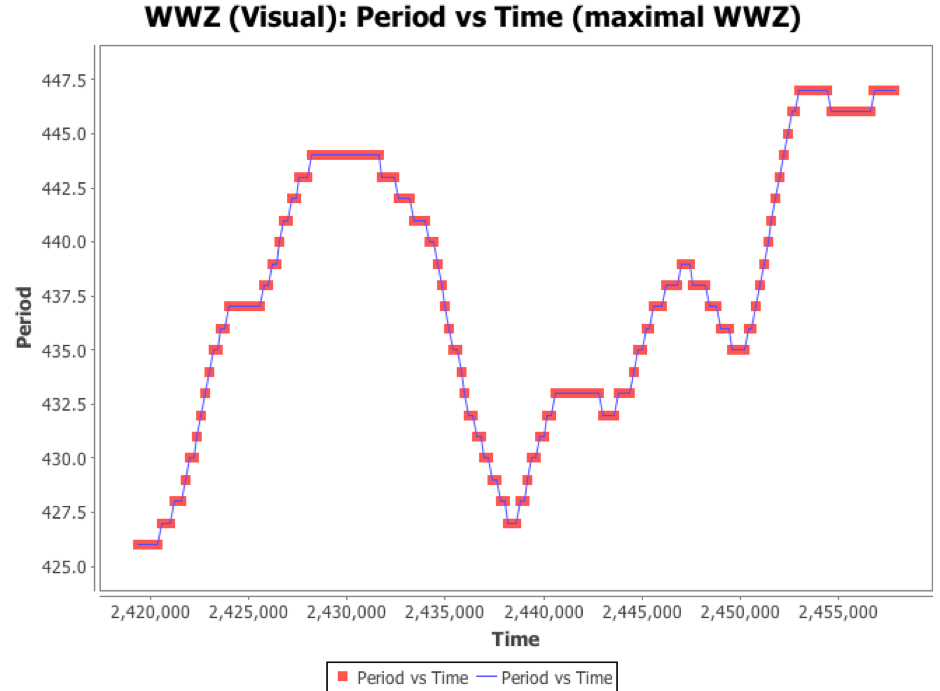 The figure above suggests that there has been a "meandering" of the mean period between the range of 427 to 446 days. This slow meandering behaviour (with period changes general less than 5% of the mean period) is relatively common in the longer period Miras and semi-regular stars.

However probably the more interesting phenomenon that R Lep displays is the long term variation in the mean brightness.  The GCVS notes that the magnitude at maximum varies between a range of 5.5 to 9.5 and indicates that this occurs with a possible period greater than 40 years.  This variation in the mean brightness of R Lep is readily apparent in the first figure above.

The figure below plots the mean magnitude of R Lep based on a bin size equal to it’s mean period (shown by the blue line).  It appears to vary by up to 3 magnitudes.  The long term modulation in the mean magnitude does appear to have a period of around 40 years, although clearly even a century long data set is insufficient to be more definitive.

This sort of behaviour has been displayed in other long period variable stars such as RU Vir, V Hya, R For and W Aql.  As noted previously by Matthew Templeton (https://www.aavso.org/vsots_ruvir) for carbon stars, the normal Mira-like variations seem to operate independently of the long term variations in mean magnitude.  Matt noted that this is a strong hint that the modulation is occurring outside of the star, rather than in the star itself where the pulsational variations occur. The best explanation seems to be a modulation in the dust opacity around the star. If a shroud of dust surrounding R Lep gets thicker or thinner we would see the star get brighter or fainter without seeing much of a change in R Lep’s underlying behavior. Matt also noted that T. Lloyd-Evans (1997) describes the occasional fadings of several well-known Miras, including R Lep.   His paper contains a plot showing the visual lightcurves of R Lep with the flux density of C2 (diatomic carbon), showing the visual fadings occurring at the same time that the infrared emission from C2 is increasing.

Raveendran (2002) carried out polarimetric observations of R Lep in the period 1991-2002.  This period coincided with a minimum in the mean magnitude of the star as shown in the figure above (around JD 2450000).  An analysis of the data shows that the percentage linear polarization increased as the fading progressed, attained a maximum of slightly over 3 per cent in the V band close to the epoch of minimum, and remained more or less at the same level during and well after the recovery to normal brightness. The polarization, apparently, originated from the circumstellar envelope above the region where the dust that caused the fading in the star condensed. The physical mechanism that causes the rather large polarization during fadings is perhaps selective extinction by aligned foreground grains produced by the passage of shocks through the circumstellar envelope.

R Lep is an interesting LPV to follow so all are encouraged to maintain the coverage that has been in place over the last 160 years.