This month's Long Period Variable (LPV) should be a treat for visual observers. S CEP is a very dark red Carbon Star.  From Wikipedia “A carbon star is a late-type star similar to a red giant (or occasionally to a red dwarf) whose atmosphere contains more carbon than oxygen; the two elements combine in the upper layers of the star, forming carbon monoxide, which consumes all the oxygen in the atmosphere, leaving carbon atoms free to form other carbon compounds, giving the star a "sooty" atmosphere and a strikingly ruby red appearance.”  It's this dark red appearance that should make this star a pleasure to visually observe!

S CEP is an M (MIRA) type variable of Spectral type C7,4e(N8e) with the “C” denoting a carbon enriched spectrum.  It's Magnitude Range is 7.4-12.9 in Visual and V band.  This makes it particularly well suited for Visual observers and work in B, R and Ic for CCD observers.  VSX reports that S CEP's period is 486.84 days however it has swung back and forth between 476 days 497 days since 1860.  It does not show any long term trends of lengthening or shortening.

There are @30,000 observations for S CEP in AAVSO International Database (AID) since 1889 but other observations exist since around 1860. S CEP is part of the Legacy LPV Program, the LPV Program and the LPV Humps program and over all has had good observer coverage. 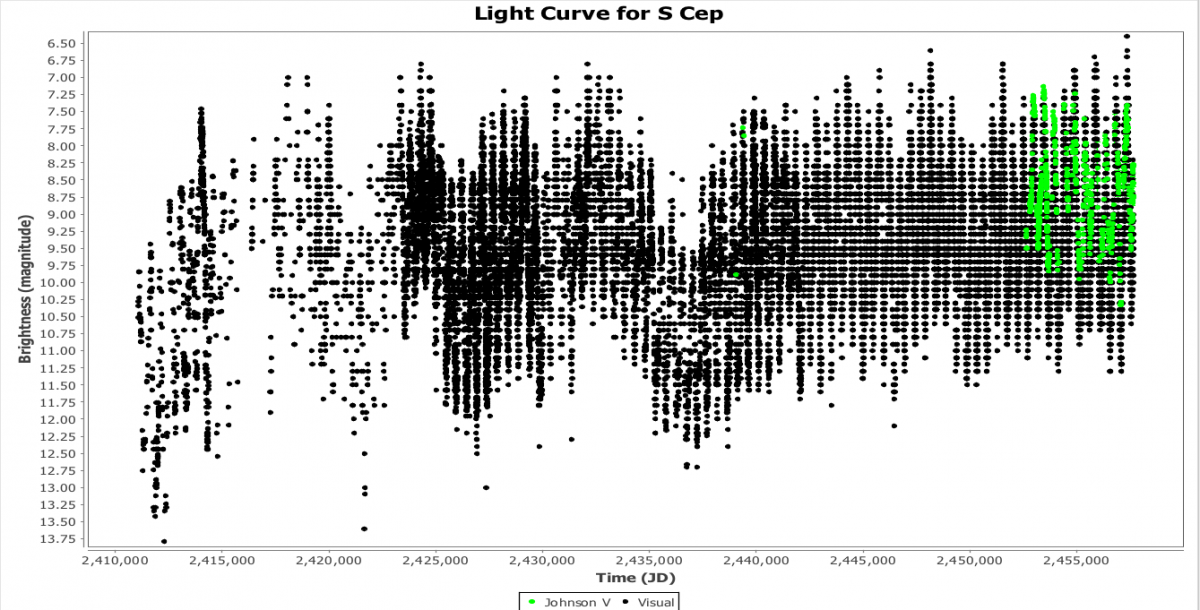 The above Light Curve (LC) was made using VSTAR and shows all of the Visual and V observations in the AID going back to 1889.  You'll notice that S CEP maximum brightness dip significantly for a number of cycles centered around 2437032 (April 7, 1960).  The maximum brightest fell off around 2.5 magnitudes in a matter of a few cycles but it recovered and looks more typical of a MIRA type variable Maxima and Minima relationship. 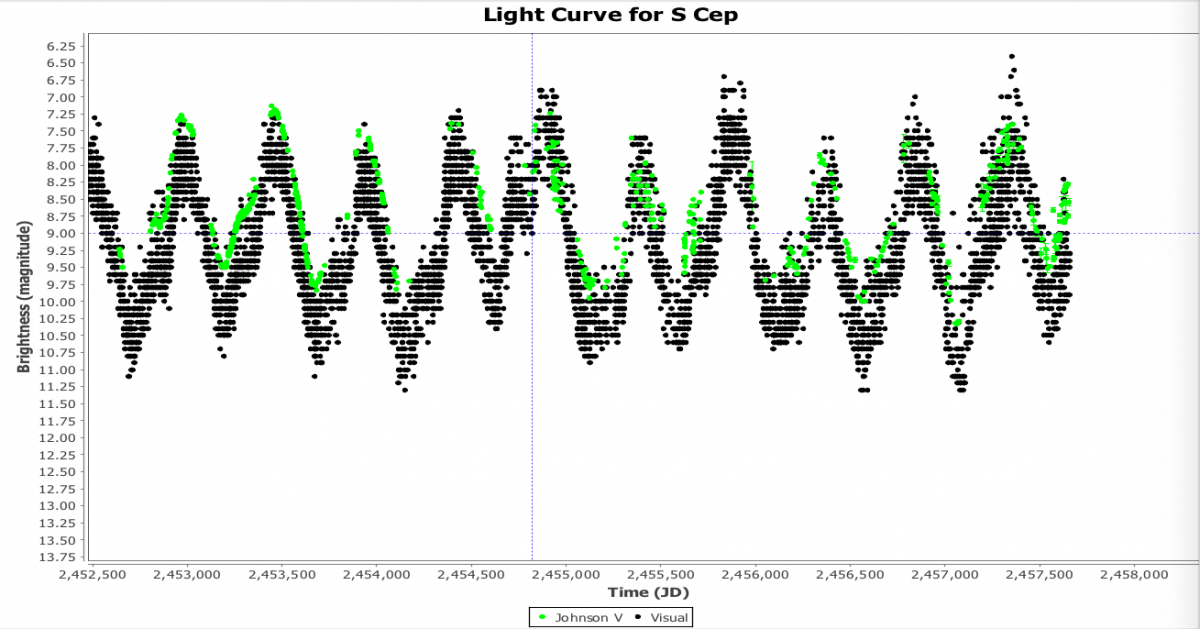 Zooming in to look at the most recent 11 or so cycles of S CEP's light curve shows some interesting behavior.  In an article Matthew Templeton wrote in 2012 about S CEP  (https://www.aavso.org/lcotw/s-cephei) that it's LC (light curve) was more irregularity than in many MIRA light curves.  He goes on to say “The shape and amplitude of each cycle vary from one to the next, and there is perhaps a second period causing the traveling shoulder on the rising branch, visible clearly around JD 2454700.”  I added a faint blue cross hair to the area Matthew is referring to.  He also mentions that there is a greater scatter of the visual observations that occurs because of observing techniques and light sensitivity of the observers than anything physical in the star.  This is typical of observations of very red Carbon stars.

S CEP also shows the “hump”, “shoulder” or “stand still” behavior that Matthew refers to on some of its cycles like many other LPVs do, however this “shoulder” seems to move on the ascending LC more than what is seen in many LPVs that show this behavior.  The “event” that Matthew points out is almost a dual-maxima because of its location on the LC and its deep shape.  As of this week, it appears S CEP has just started a “hump” or stand still/shoulder or perhaps even a dual-maxima behavior.  It might be fun to watch this event unfold!

S CEP has many well placed comparison stars for both visual and CCD observers. As mentioned earlier S CEP is circumpolar for most observers in the northern hemisphere and is well placed to observe this fall.