Since 1967 LX Cyg's period has increased from 470 days to around 600 days  over 20 to 30 years and may be stabilizing for the last few years.  This makes LX Cyg one of the few LPVs who has seen period changes this large.

LX Cyg spectral type was SC3e-SC8e which is rare among LPV stars.  LX Cyg's spectrum has apparently changed to spectral type C in the recent past.  It is very rare for an LPV to change spectral type.  There is speculation that these two events happened during the same time frame and may be related.

The first observation for LX Cyg in the AAVSO International Database (AID) is from 1967 but observations have been available since around 1900 or a bit earlier.  It has been monitored steadily until the present and currently has about 2600 observations reported in the AID. 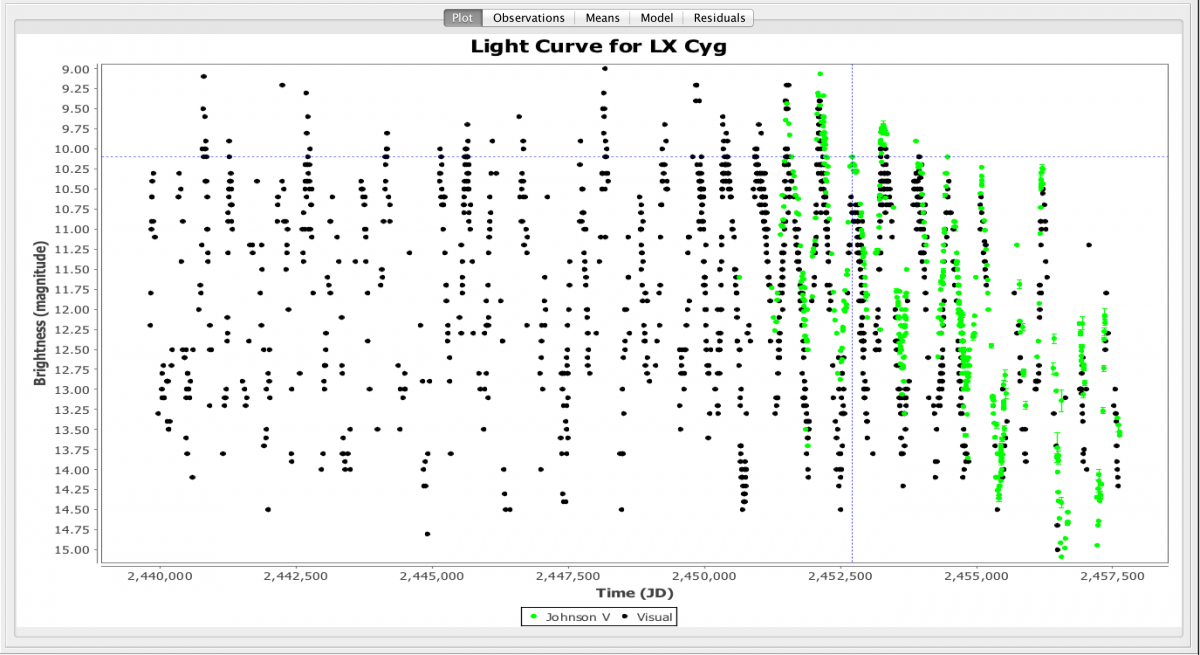 As you can see most of the observations have been from visual observers despite this MIRA being in the range of Mag. 9.1 – 15.1.

There seems to be a large number of comp stars available for V and visual photometry.   LX Cyg and its two closest stars form a pattern that may help picking out the correct star.  I know the pattern of these 3 stars have helped me identify LX Cyg. 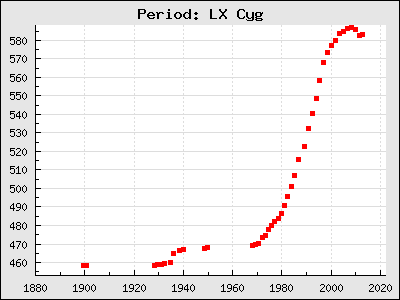 The above is a period graph for LX Cyg from Thomas Karlsson's monumental work of the O/C, Period and Mean Lightcurves of around 490 Mira variable stars.  The main webpage of his study can be found at http://var.astronet.se/mirainfooc.php.

The above graph shows that LX Cyg's period has increased steadily since at least 1967 from 470 days to around 600 days.  This increase in the period may have peaked between 2004 and 2006 and maybe starting to shorten again or perhaps settling in to “normal” change in period changes that many Mira stars show over time.  This is strongest period increase found in a 2005 study by Templeton et al.

However a recent paper by S. Uttenthaler http://arxiv.org/pdf/1511.02159v2.pdf says that the spectrum of LX Cyg changed from spectral type SC to spectral type C becoming a Carbon star may have occurred around the same time period as the observed increase in LX Cyg's period.  This paper further suggests that the increase in period would not be caused by a thermal pulse (TP).   BH Cru has also gone through this similar change of its spectrum from S/SC to C  and showed a similar increase in its period.  They suggested that the spectra change could be caused by an underlying mechanism that is related to a recent third dredge-up mixing event that brought up carbon from the interior of the star. This is beyond the scope of this article.  Further reading is suggested!

However all of the papers agree that this LPV should continued to be observed to settle outstanding questions about LX Cyg's behavior. Please consider adding this star to your observing list!