I have an admission to make. Sometimes I am unfaithful to my beloved LPVs and have flings with other stars. I spend most of my time with LPVs, but occasionally, my eyes do wander. Variety is the spice of life after all. So is it that wrong if I spend time with the occasional RCB star or legacy CV?  I think not. Besides, I’ve always had a bit of a thing for symbiotic stars. They are quirky and interesting, but they also felt like cheating since they’ve long been claimed by the cataclysmic variable section, with R Aquarii being the lone exception. We claimed that star for ourselves since the secondary star is a Mira. After the LPV Section Webinar on August 1st, my views toward symbiotic stars have changed and I no longer need to feel dirty about my dalliances with them. I now know that Symbiotic stars are just as much LPVs as they are CVs! Symbiotics come in two main types. S-types (like CH Cyg), and which account for about 80% of symbiotics, pair a normal red giant star with a compact accretor, like a white dwarf or neutron star. D-types (like R Aquarii) have a Mira and compact accretor. D-types account for roughly 20% of symbiotics. Some rarer types exist involving yellow K-type giant stars, but these constitute less than 1% of symbiotic systems, which are already rare unto themselves. So, since symbiotics give us the best of both worlds when it comes to large pulsations and violent outbursts, this month we’re going to take a deeper dive into the mysterious symbiotic star, CH Cyg. 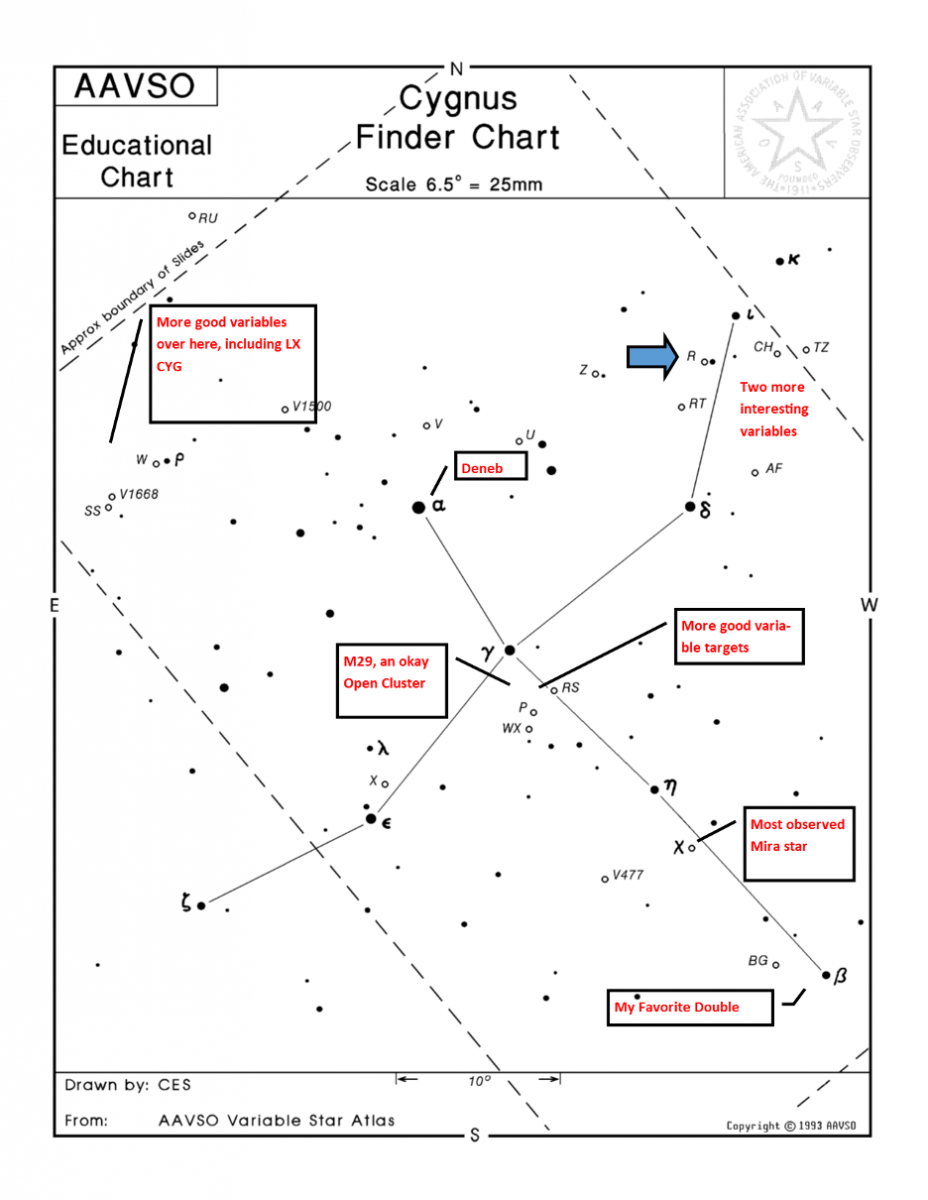 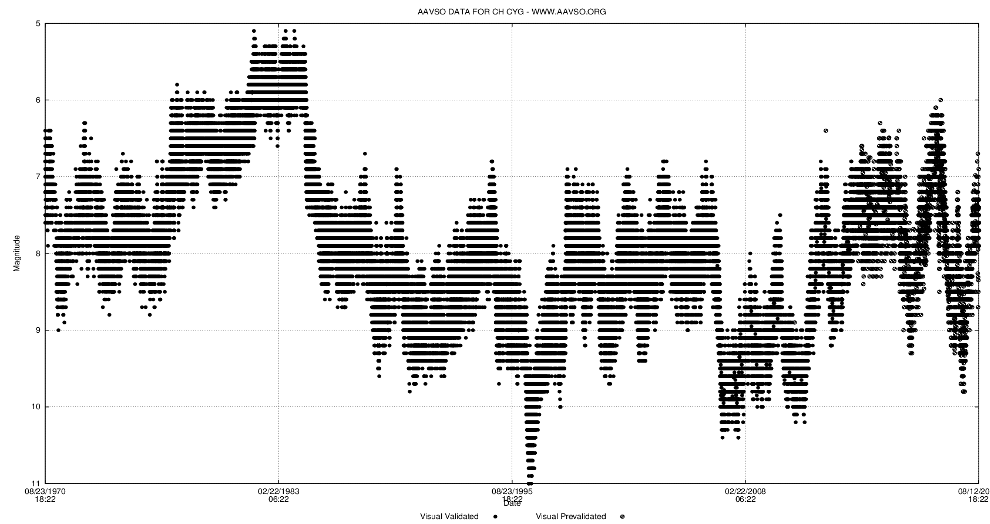 As you can see from the past 50 years of AAVSO visual observations above, CH Cyg exhibits behavior beyond the pulsation period of the red giant star. For a long time, CH Cyg was considered a fairly normal pulsation red giant with about a 100-day period and exhibiting no spectral peculiarities—a standard M6III giant. In 1963, a strong blue continuum and H1 emission lines appeared, which led astronomers to the conclusion that this is a symbiotic system. Changes in the optical bands generally correspond to activity in other parts of the electromagnetic spectrum. Bipolar jets have been recorded in the radio (first seen in the 1977-1986 outburst) and x-ray spectral regions, which are most likely caused from overflow mass ejections. The radio jets are correlated to visual dimming of the system, so this is an important reason for visual observers to monitor the system. When we see dip, professionals know to start observing the system with instruments like the VLA, Chandra, HST, etc. Collecting this data is key to understanding the accretion dynamics which drive the system, something that we don’t yet fully understand. Plus, the jets have exhibited changing behaviors over the course of time, so continued visual monitoring is important.

Debate exists over the construction of the CH Cygni system. We know there is a pulsating red giant and a white dwarf accreting matter. But is that it? Some say yes, while others claim there is a third star in this system. The triple star system theory actually seems to be the majority position, although everyone who supports the triple star system seems to have different ideas on how those three stars are arranged. If there is a third star, it must contain a spectrum similar to the red giant, and thus remains spectroscopically hidden (like in the epsilon Aurigae system). Astronomers also debate whether the third star (if it exists) would cause eclipses. Some say it must eclipse and some say not. So far, we have not definitively seen any eclipses, although astronomers are predicting when they will occur and are looking for them.

Several periods show up in the light curve and there is no consensus view on the causes of these periods since there is no consensus view on how this system is actually constructed. The most prominent periods most cited in literature are 756 days, 155 days, and 101 days. A 17-year period and possible 338-day period have also been cited. The longer periods (756 days and 17 years) could be attributed to possible eclipses with the 155- and the 101-day periods due to the pulsations of the red giant. Others argue the 756-day period could be the long secondary period of the red giant. The system has also exhibited micro-variability of about 0.15 magnitudes in V over short time spans, 3–8 minutes. The micro-variability is more pronounced in B and not detectable in R and I bands, so it is likely caused by the dynamics of the hot white dwarf.

What does all of this mean? Although our collective of human knowledge grows every day, there is still much out there we don’t understand. With a star like CH Cygni, we have several ideas, but we don’t have definitive answers. In order to get those answers, we need more data. I find this very exciting because it something that I can help take a part in, even if it is a small one. I’m not smart enough to figure out the dynamics of the stellar wind from the red giant or the properties of the accretion disk around the white dwarf. I’m not smart enough to figure out whether CH Cygni consists of three stars or two. But fortunately, there are people out there smart enough to figure these things out and I can support their efforts with observations. My visual observations likely won’t be enough for some smart astrophysicist to answer these questions, but they are enough to tell them when something important is going on and to point the most sophisticated instruments at humanity’s disposal toward the star system and collect the data necessary to figure all this out. We all have a role to play, so keep up the good observing!

Side note: If you want to learn more about studying the light curves of other classic symbiotic systems, I recommend looking up two JAAVSO articles by Augustin Skopal. The first one is in Volume 35, No. 1 (2007), and the second in Volume 36, No. 1 (2008). 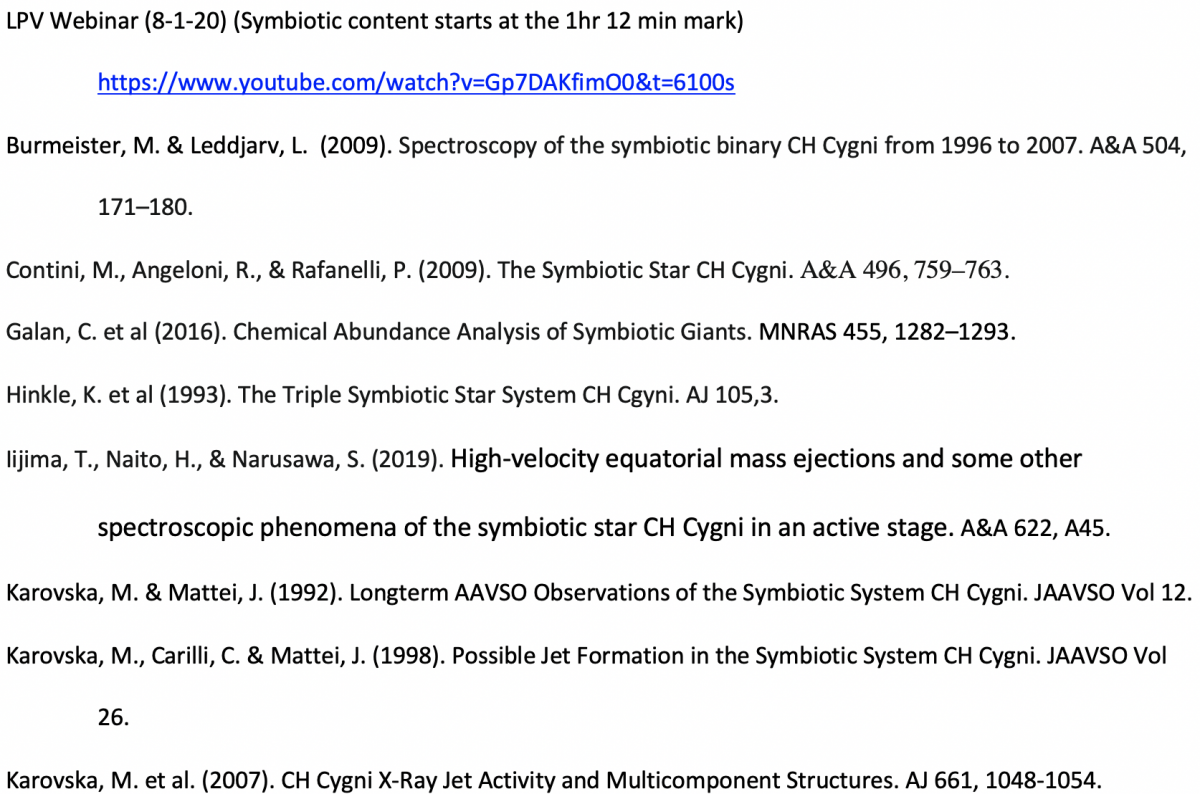 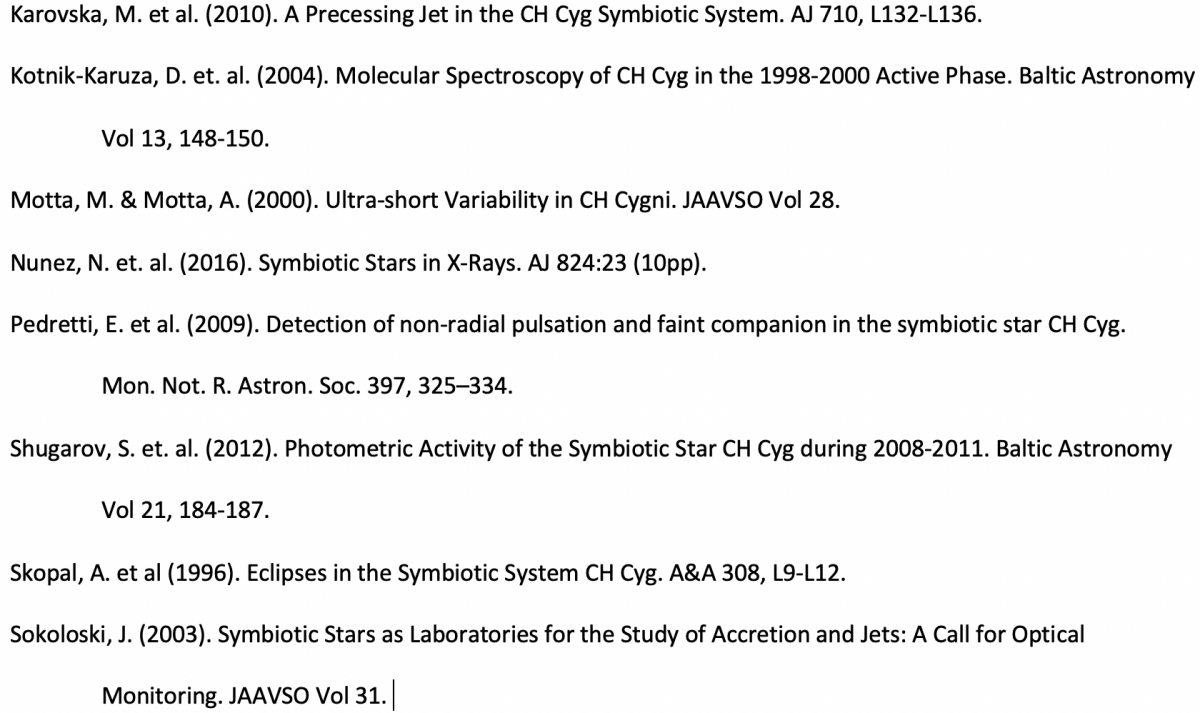