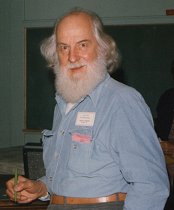 Cap joined the AAVSO 40 years ago. He served as chair of the Solar Division (now Solar Section) from 1963 to 1979 and, for the last three years, was the Editor of the Sudden Ionospheric Disturbances Supplement that is published along with the Solar Bulletin each month. In 1999, he received an Honor Award for outstanding contributions and dedication to the goals of the organization.

Along with Arthur Stokes, who passed away almost exactly a year ago, Cap was responsible for creating the designs of most of the SID receivers and antenna configurations used by observers today. Until the very end of his life, he continued to work at simplifying these designs and reducing component costs in order to attract the largest possible audience of builders. His latest revision appeared in last month's Solar Bulletin.

Cap's interests were not limited to the design of SID equipment.. He also devoted much time and energy to the design of seismic sensors, gravity wave detectors, and magnetometers, and he contributed designs, authored papers and presented talks on and demonstrations of many of these items. In recent years, he became convinced that SID receivers were capable of detecting strong gamma-ray bursts (GRB) and, only a few months ago, had the satisfaction of reporting a candidate signal received by an observer to the High Energy Group at NASA/Huntsville with whom the AAVSO has a working relationship. At the time of his death, he was working on a paper relating to the history of sunspot observation in the Solar Division and was administering an experiment aimed at demonstrating the differences to be expected between the classic Wolf and more modern Zurich methods of counting. (I engaged in an animated email exchange regarding this experiment with Cap the day before his stroke and can attest to the excitement with which he looked forward to the outcome of the research.)

Whether they met Cap in person or via email, most all observers will remember him as a patient, resourceful, helpful, inventive, cheerful, truly unique individual who was always ready to try something technically new and who encouraged all who wanted to share in that adventure to "Come along. You'll never know if it works if you don't try it!"

Thank you, Cap, for all you have done for us. We will miss you very much.

On the 26th of November we all lost a most important member of our group. As most of you must know by now, Cap Hossfield passed away that day. He died happily doing what he enjoyed most, which is what any of us can hope for. I wish him peace and farewell.

Cap was an amateur. An amateur radio man, an amateur astronomer, an amateur physicist; A true amateur scientist. I met him four years ago. When I first heard his name, "Cap", I just naturally envisioned an old timer - tinkering with old tube type radios and whip antennas. When I met him, he looked just like I had envisioned. An older man with a big old white bearded face, dressed in jeans and a plaid shirt. Sort of rough around the edges but with a big friendly smile, always willing to talk to anyone. He looked like a "Cap". He looked like he had been around and seen a few things in his years.

But beyond this look of an old timer who had been around since the birth of radio, he had a way about him. He had ideas - lots of them. And he followed up on these with more ideas and projects that he had worked on to test out these ideas. He had dreams - lots of them. And he worked diligently at accomplishing these dreams. He never seemed to stop. He was always on the go. You have all seen his monthly supplement. You have all seen his enthusiastic postings to the SID/GRB newsgroup. He was eternally involved. Cap inspired all of us and was a great asset to the AAVSO Solar Division and in his latter years, the SID group.

Now that we have lost him we will certainly have a void. People like him are hard to replace. Not just because of what he knew, and he certainly knew a lot, but because of the time and energy that he was able to give to our group. People like him are often replaced by more than one person. And those people will wonder how he did it all himself. This will be the case with Cap. He will be sorely missed but we should always be happy with the memories of his life and his contributions to the group. We would do well to use these as our continued inspiration to be the amateur that he was. Ever productive and ever inquisitive about the world around us and the many opportunities that we have at hand to peer into its mysteries.

The following messages were posted to the AAVSO SID Discussion Group in remembrance of Cap:

It was very sad for me, upon returning from a trip Saturday, to learn of our loss of Cap on the 25th. I found that he had sent me an email just 39 minutes before suffering the fatal stroke. As always, he was informative, authoritative and encouraging. His professionalism would put many "professional" scientists to shame, and he will be long remembered by many. I hope someone writes up something for the AAVSO bulletin about his contributions. I don't know enough about his history to do it myself.—Jim Mandaville, Tucson, AZ (A-90)

It's amazing how much influence one man can have on the world. Cap was knowledgeable in so many areas and was always so willing to share his expertise with others. Regrettably, I never met Cap and yet he still had a strong influence on my life. I first became aware of Cap back in 1969 during my junior year of high school. It was then that I read an article that he had written in Sky & Telescope (April 1969) regarding the detection of solar flares using radio equipment. It is now 33 years later and I still enjoy this subject as much as I ever did. I can't imagine the number of people Cap similarly influenced in such a positive way over his lifetime. He is truly a legend and will never be forgotten.—Andy Clerkin (A-29)

Cap's passing away is a great loss to all of us. Although I never met him face to face we communicated with each other many times - especially during the past several years. He had an inquiring mind and so was on top of important events in many scientific subjects including solar flares and their effect on the earth's atmosphere, vlf radio wave propagation, the geomagnetic field, earthquakes, gamma ray bursters and even gravitational waves. He not only studied and talked about such things but also with much enthusiasm took on the experimenter's role with great effort and skill. And, of course, he inspired many others to participate in many scienific endeavors and helped them in very practical ways. I wish him peace and happiness on his final journey.—Al McWilliams (A-94)

Casper visited my home here in Houston, Texas back in the 70's when I first built a vlf receiver for solar flare work. He was in Houston for a meeting and dropped by to have a look at my receiver and antenna system. I was surprised about his interest. His expertise in vlf receiver and antenna design will really be missed. The loss of not being able to discuss technical matters with him over the internet will be great. And his efforts in the continuing of the technology for solar SES reception will be certainly remembered!—Jerry Winkler (A-50)