Nova Centauri 2013 -- now named V1369 Cen -- is another bright nova in our skies for 2013.  Discovered by Australian observer John Seach on December 2nd, Nova Cen has now surpassed Nova Del 2013's maximum at 4th magnitude, and began a complicated evolution to (thus far) two separate maxima brighter than 3.5.  Nova Cen should put on a wonderful show for southern hemisphere observers for the end of the year, and may well continue well into 2014!  We'll post updates to this page as we learn more about this bright southern nova.  Meanwhile, we encourage all southern hemisphere observers to catch a glimpse of this rare treat while you can!

John Seach discovered a bright transient in Centaurus on the night of December 2, and sent word of the find to the IAU's Transient Objects Confirmation Page.  The object was confirmed in short order by the amateur community, and a number of observers began following it once a sequence was quickly established. Surprisingly, the nova brightened considerably within a day of discovery, and by December 5 it overran the initial sequences!

Since its initial rise, it reached its first peak around magnitude 3.5 on day 3 of the outburst (December 5), declined by a magnitude over the following three days, and then increased again to around magnitude 3.3 by day 12.  Since day 12 it has declined again, down to around magnitude 5.2.  Where it's headed from here is anyone's guess, but please keep watching!  The nova has been well-covered by visual observers, but not as much by instrumental observers. The AAVSO has been monitoring it with BSM_South, but there's plenty of empty space in the instrumental light curve -- join in if you can! 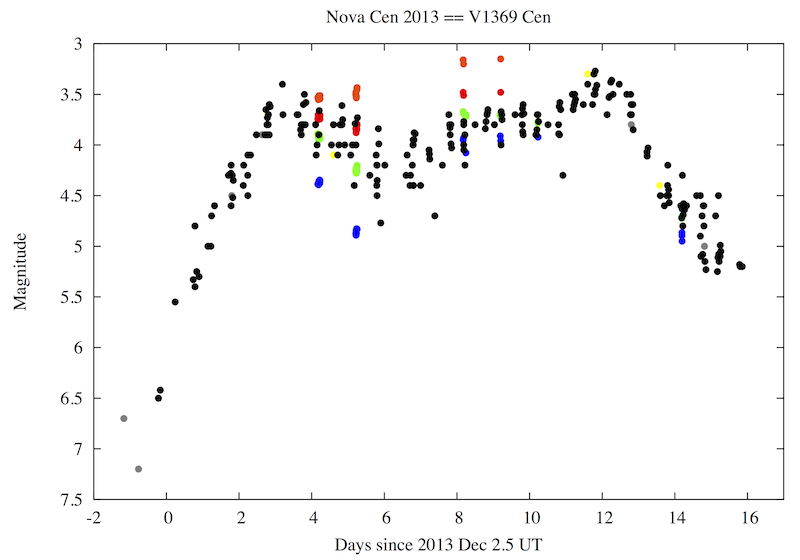 The amateur community also stepped in quickly to confirm the object as a nova, with spectra taken by Malcolm Locke (New Zealand) and Rob Kaufman (Australia) detecting the tell-tale strong and broad hydrogen emission lines typical of novae early in outburst.  Spectroscopists have checked in on the nova regularly since outburst, and it has now developed some hallmarks of the classical "FeII (iron) nova".  Ulisse Munari commented on a spectrum taken last week, noting the presence of several iron multiplets, and also noted that the narrower P Cygni profiles are consistent with slower ejection velocities, which are themselves consistent with the slower light evolution seen thus far in the optical photometry.  Nova Cen 2013 certainly isn't a fast nova, but it remains to be seen whether it will follow a more normal evolution from here, or be a slow nova that remains close to maximum for awhile.  Such a designation will have to wait for a few months, or until the nova declines to three magnitudes below maximum, whichever comes first.  Again, keep your eyes (and cameras and spectrographs) peeled.

Yet another gamma-ray nova?

Another recent newsworthy note came from the Fermi satellite team, when they announced Nova Cen 2013 had joined the ranks of gamma-ray emitting novae.  The nova was first weakly detected on December 7 (Astronomer's Telegram #5649), and continued to brighten through at least December 11 (ATel #5653).  The latter ATel noted the gamma-ray peak coincided with the second maximum in the optical light curve contributed by AAVSO observers (starting around day 9).  Gamma-ray production in novae was a big discovery a few years ago, but now seems to be occurring (or being detected) more and more often.  It's possibly related to the improved sensitivity that the Fermi satellite provides, but the phenomenon is still not totally understood, and may be truly uncommon.  Interestingly this nova hasn't yet appeared in X-rays though satellites have looked.  Both the gamma-ray evolution and the first X-ray detection will be interesting to follow.

The fact that the gamma-ray production correlates with the optical light curve in Nova Cen again makes it clear how important your contributions are. Both visual and instrumental observations are needed, and if you are making instrumental observations, filtered and transformed calibrated data will be especially valuable.  Note that Nova Cen is an especially good target for DSLR observers; it's very bright, and many DSLRs will have a wide enough field to include good comparison stars.  Please see our overview of Nova Delphini 2013 for more information on how best to observe bright novae instrumentally.

Nova Cen will likely remain a treat for southern observers for awhile. It's too early to predict, but it may even remain at naked-eye brightness for several more days.  Coverage of this nova has been truly world-wide, with observers from Brazil, Argentina, Uruguay, The Philippines, New Zealand, Australia, and South Africa contributing on the ground, with observers in Italy, Belarus, and the United States using remote telescopes to join in the fun!  We hope more of our southern friends will take a moment to enjoy this naked-eye nova, and contribute to the growing light curve of V1369 Cen. This nova will be a good one to follow and enjoy for quite awhile.  Catch it while you can!

2014 January 30 (JD 2456688):  We're nearly 60 days from the date Nova Centauri 2013 was first detected (December 2 of last year).  Nova Cen remains bright, though it has now declined to the edge of naked-eye visibility.  As of today, the nova is around magnitude 6.0, not quite three magnitudes below its maximum of 3.5; it's a little too early to determine whether it's a fast or slow nova, but that may be answered in a matter of days if the nova falls more than half a magnitude below its current brightness which seems likely.

Sixty AAVSO observers -- including AAVSO Director Arne Henden -- have submitted over 5,200 observations of the nova to the AAVSO International Database.  The nova is generating a lot of interest from observers in the southern hemisphere, and the growing community of spectroscopists is following this nova as closely as visual observers and instrumental photometrists.  Recently, spectra began showing increasing hydrogen Balmer emission (H-alpha).  Along with the AAVSO forums, you can follow discussions of V1369 Cen and its evolution via the Variable Stars South website and also the ARAS spectroscopy forum.

Here is a light curve of visual and instrumental data from the AAVSO International Database as of this morning: 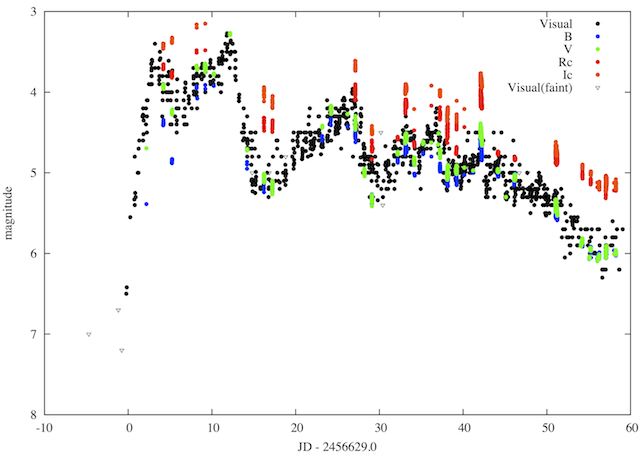