My first interest in Astronomy began back when I was in High School and included a "Chipped Lens" kit from Edmunds Scientific (ordered from a "Popular Mechanics") which led me to make a 4 1/4 inch reflecting telescope. Oddly enough I don't remember much about what I was observing except a Lunar and Solar Eclipse . This period ended sometime after I graduated from High School (1974). 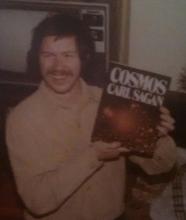