AAVSO Observer Code
KJSA
Affiliation
American Association of Variable Star Observers (AAVSO)
Full Name
Jason Kendall
Location
Brooklyn, NY, US
Background/Interesting Fact
I hold a Master of Science in Astronomy from New Mexico State University and am currently adjunct faculty at William Paterson University teaching astronomy. I am also a board member of the Amateur Astronomers Association of New York. Since 2008, I have led the Inwood Astronomy Project which brought over 200 events of stargazing and public astronomy outreach to upper Manhattan, including the historic Inwood Star Fest, where Inwood Hill Park lights were turned off as part of the 100 Hours of Astronomy event in IYA2009. This was the first time in New York City history when park lights were turned off for an astronomy event. I've also focused on park safety due to an uptick in sexual assaults in Washington Heights and Inwood during 2011. I've worked to make our parks safer by encouraging public use of parks at night through night-time events with Park Rangers. I have led numerous "starwatching parties" and astronomy events in New York City, New Mexico, Minnesota, New Jersey, Connecticut and Texas. I am also proud to have been part of the NASA/JPL Solar System Ambassador Program from 2009 to 2012. It all started way back in the fourth grade by the encouragement of two noted astronomers, Charles Schweighauser and Bart Bok. I saw Saturn through Charlie's telescope at then Sangamon State University on a clear Illinois night, and Bart encouraged me under those stars to study hard to come visit him at Kitt Peak National Observatory. I finally did make it down there about a decade after Bart passed away, and I found the favorite spots in Tucson, Arizona, where Bart and his wife Priscilla would spend when they were not gazing at the stars. Bart and his wife were pioneers in the study of the Milky Way, and their studies of the starforming regions called Bok Globules. It's even in my family. My great-grandfather was a Midwestern minister who used to preach his sermons out under the dark, cloudless nights. He always believed that getting out and experiencing the wonders of the natural world was a central part of being human. My family has always been inspired by his words: "We look up to look within." I hope that you'll join me under the stars or at one of my talks.
Website URL
http://www.wpunj.edu/cosh/departments/physics/faculty/Kendall.dot 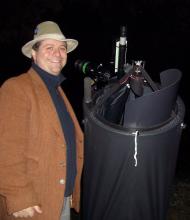