AAVSO Observer Code
SET
Affiliation
None
Full Name
Christopher Stephan
Location
Huntington, WV, US
Background/Interesting Fact
Chris Stephan
My name is Chris Stephan and I am living in Fort Gay, WV. I recently retired in 2013 as a science teacher for nearly 30 years in Highlands County, Florida. I have been a member of the Highlands Stargazers in Sebring, Florida, and am an honorary member of the Mahoning Valley Astronomical Society in Newton Falls, Ohio.

I've always loved the night sky. As a child, I often would go outdoors at night and enjoy the starry sky. I began observing variable stars in March of 1973. My first variable star was Z UMa, which I still observe to this day. I laugh now when I look back at how excited I was after making that observation, calling people on the phone to tell them about it. I officially joined the AAVSO in May 1976.

Well, the variable star fever has stayed with me. I have made over 41,000 variable star estimates to date. My main area of interest is in eclipsing binary stars. I was deeply involved for five to six years on observing eclipsers in Puppis at far southern declinations. I have authored or co-authored several papers using my observations. My visual eclipsing binary star observations are published each year by the VSOLJ, the Variable Star Observers League of Japan.


My main variable star scopes are 2 Explore Scientific AR152 f/6.5 refractors, and 10x50 binoculars. I dedicated my home observing location as the "Robert Clyde Observatory" in November of 2001.

I was privileged to receive the distinguished AAVSO “Director’s Award” at the 2004 summer AAVSO meeting in San Francisco. I have also been very active in the Citizen Sky program. I was team leader of the 20/20 Vision Team, which trained people to be citizen scientists and taught them how to make visual observations of Epsilon Aurigae and the other stars in the “10 Star Tutorial”. A number of these people actually joined AAVSO are submitting visual observations of variable stars.

In August of 2001 I organized a Hands-On Astrophysics workshop at Sebring Middle School in Florida. Janet Mattei, Aaron Price, and Brian Rogan came down and presented the workshop to Highlands County teachers.

Along with astronomy, my other hobbies are gardening, birding, nature walks, and travel. I have had 2 articles published in FLORIDA GARDENING magazine.

One of my greatest joys has been to see my 29 year-old son, Andrew, get interested in astronomy as a child. Andrew began observing variable stars in October 1997. His favorite three stars are WZ Cas, R Leo, and BU Tau. Andrew now lives in Dallas, TX. Andrew's other interests include books, football, ultimate Frisbee, and cars.

It is truly an honor to be in the AAVSO. I feel it is an organization of QUALITY. Variable star astronomy is one of the best areas that amateurs can contribute to the science. I also want to encourage you fathers to let your children get involved with you in this fun hobby. 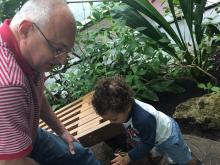