This summer's Variable Star of the Season is delta Scuti and the class of variables which carries its name. Because they are low amplitude variables, they will be challenging to visual and CCD observers alike, but we hope it's a challenge you will all enjoy! A diverse class of very short period stars, the delta Scuti variables have something for everyone. Some have amplitudes of nearly one magnitude and regular light curves like some of the RR Lyrae stars and Cepheid variables. Others have complex light curves and multiple periods with millimagnitude light variations. The delta Scuti stars are important astrophysically for many reasons. They are some of the best targets for asteroseismology -- using the pulsations of a star to study the structure of the interior -- and the high amplitude stars serve as standard candles to measure cosmic distances with. 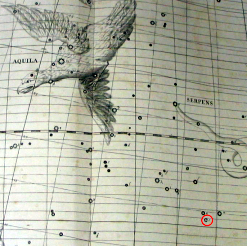 Photograph of the delta Scuti field from a 1781 edition of Flamsteed's Atlas, with delta Scuti indicated by the red circle (click to see full page). Flamsteed didn't recognize Scutum as a constellation, and it was considered part of Aquila. Since Scutum is now one of the 88 recognized constellations, the variable is now designated delta Scuti. It can be found on page 97 of the AAVSO Variable Star Atlas. Photo credit: M. Templeton, AAVSO.

Credit for the discovery of the delta Scuti as a variable star goes to W.W. Campbell and W.H. Wright of Lick Observatory. Using the Mills Spectrograph, the two astronomers measured the radial velocities of a sample of moderately bright stars, and found several whose radial velocities varied with time. One of these, "2 Scuti", showed radial velocity variations with amplitudes of several kilometers per second. More than 30 years later, Edward Fath and Attilio Colacevich revisited this object, and published short summaries of their findings in PASP. Fath conducted a photometric study, while Colacevich used the Mills Spectrograph to measure the radial velocity amplitude. Both found periods near 0.1937 day, and Colacevich claimed that it couldn't be a spectroscopic binary with such a combination of radial velocity amplitude and period. Fath noted photometric amplitude variations in his 1935 paper, and in 1937 found multiple periods in the photometric data. In 1938, Theodore Sterne of Harvard examined whether radial pulsations could be responsible for the multiple periods observed in this star. Radial pulsations are pulsations where the star pulsates in a spherically symmetric manner -- all points on the surface move in and out at the same time with the same period and velocity. The periods and period ratios of radial modes are fixed by the structure of the star. Sterne calculated the predicted periods and period ratios for a reasonable stellar model, and subsequently ruled out radial modes as being capable of producing all of the observed periods.

The delta Scuti stars reside near the point where the instability strip crosses the main sequence in the HR diagram. Stars in a variety of evolutionary states -- including pre-main sequence stars -- can lie within the instability strip, so long as they have spectral types between (roughly) F8 and A2, and luminosity classes between V (dwarf) and III (subgiant). For stars with solar metal abundances, this corresponds to masses between about 1.5 and 2.5 solar masses, and between 1.0 and 2.0 solar masses for metal-poor stars. They are all short period stars, with individual periods lying in the range of 0.03 to 0.3 day. 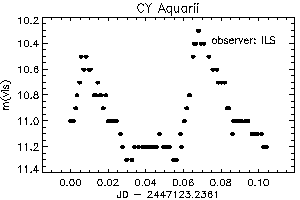 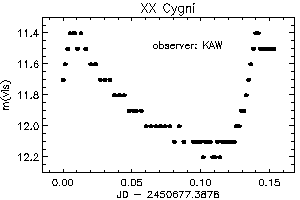 Light curves for the high-amplitude delta Scuti stars CY Aquarii and XX Cygni, obtained visually and with a CCD camera, respectively. Although CY Aquarii is classified as a high-amplitude star, it has a varying light curve which indicates the presence of secondary modes.

The primary subclassifications of the delta Scuti stars rise from two things: the pulsation amplitude, and the metal abundances. High-amplitude delta Scuti stars (known as "HADS") are defined as those with amplitudes above 0.1 magnitudes in V, and low-amplitude delta Scuti stars ("LADS") are those with smaller amplitudes. Though the amplitude break is somewhat arbitrary, there is a reasonable physical basis for it. The large-amplitude stars tend to be those undergoing radial pulsations, and typically only pulsate in one dominant mode at a time. They also tend to be more evolved, and lie well off the main sequence in the subgiant branch of the HR diagram. And it is these stars that are typically used for distance measurements, because they have well-defined period-luminosity relations McNamara et al. 2000). The low-amplitude stars can be pre-main, main, or post-main sequence stars, and may either be multiperiodic or monoperiodic. However, it is the multiperiodic LADS that are useful in asteroseismological studies, and are often the targets of long-duration, multi-site photometric campaigns designed to detect larger and larger numbers of pulsation periods.

The other subclassification is one of metal abundances. The metal rich, Population I stars are known as delta Scuti stars, since the class prototype is a Population I star. The metal-poor stars are also known as the SX Phoenicis stars, after the class prototype. These stars pulsate for exactly the same reason as the delta Scuti stars, and are essentially the same as the high-amplitude delta Scuti stars except for their metal abundances. The SX Phe stars are known primarily as globular cluster and galactic halo stars, and also have a period-luminosity relation.

What makes them tick?

The delta Scuti stars lie on what is known as the instability strip, a region of the Hertzsprung-Russell diagram where stars may undergo self-excited oscillations. The instability strip is home to many other types of pulsating stars that you may be familiar with, including the Cepheids and the RR Lyrae stars. The driving mechanism behind "self-excited" oscillations is a special region of the stellar interior where atoms of either hydrogen or helium transition from partly to completely ionized. If the star is compressed, the ionization fraction of these regions increases, raising the opacity of the material and blocking the luminous energy trying to escape from the interior. The increased heat and pressure built up in this layer push the outer layers of the star outward. As these outer layers fall back inward again under the force of gravity, the ionization region gets compressed again, restarting the cycle. The variation in brightness is caused by changes in temperature and radius caused by these motions. For stars on the instability strip, this important layer lies at just the right depth in the star for pulsations to be self-sustaining. If it were deeper, the driving forces would be overwhelmed by convection, and if it were shallower, the energy would be dissipated in the atmosphere. In the delta Scuti stars, the ionization layer that drives the pulsations the most is the second helium ionization zone, where singly-ionized helium loses a second electron, but both the hydrogen ionization and neutral helium ionization layers can also contribute to the pulsation driving. The driving mechanism for the Cepheids and RR Lyrae stars is the same. 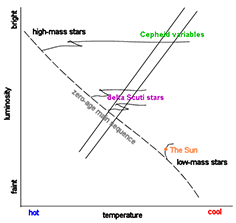 Since the delta Scuti stars share the same pulsation mechanism, it's not surprising that their light curves can look very similar to those of Cepheids and RR Lyrae stars. Indeed, the high-amplitude delta Scuti stars or AI Velorum stars are still considered to be dwarf Cepheids stars by some, and some have been given the RR Lyrae designation RRs. But unlike the Cepheids and the RR Lyrae stars, some delta Scuti stars exhibit very different behavior, namely non-radial pulsation. The light variations in Cepheids, RR Lyrae, and the high-amplitude delta Scuti stars come about because of spherically symmetric variations in radius and surface temperature of the star, which give rise to a change in luminosity. In some delta Scuti stars, the surface also undergoes changes in radius and temperature, but in an asymmetric way. Because the star is a three-dimensional object, there are a large number of resonant modes which can be excited within the star, each of which has a unique pulsation period. A few delta Scuti stars (like FG Virginis and XX Pyxidis) are known to have a dozen or more of these non-radial modes excited at once, and can be detected via the analysis of very precise time-series photometry.

The delta Scuti stars aren't the only objects to exhibit such modes. The pulsating white dwarfs can also have non-radial modes, as do many stars outside of the instability strip (such as the beta Cepheid and slowly pulsating B stars, the gamma Doradus variables, and others). Our own Sun has a rich pulsation spectrum of thousands of radial and non-radial modes. The Sun has often been compared to a giant bell ringing in space, and several observatories here on Earth and in space are devoted to "listening in" to the vibrations our Sun makes. The study of these modes lets us fine-tune models of the solar interior, much like the study of earthquakes enabled seismologists to study the interior of the Earth. The study of vibrations in the Sun is known as helioseismology, and the study of pulsating stars in general is known as asteroseismology. (Note the spelling asteroseismology is the commonly accepted one -- see Gough 1996 for a discussion.)

When observing, it's important to remember that these stars have very short periods of six hours at most, so you will need to obtain observations once every fifteen minutes or less to follow the light curve. If you are looking at a multiperiodic star, you could even try to obtain several consecutive nights of photometry on a single star.

Delta Scuti itself lies on the boundary between the high- and low-amplitude stars. It is highly evolved, and has an amplitude of about one tenth of a magnitude, but it contains at least six independent pulsation modes, and may contain more. It has an average V magnitude of about 4.75, so CCD observers may need to use very short exposures. Because there is a secondary period close to the primary one, you should notice the varying amplitude in the light curve (caused by beating of the two periods). It is located at α 18h 42m 16.4s, δ -9° 3' 9.2" (J2000), and is well placed right now for observers in the northern and southern hemispheres.

Some potential targets for the current observing season include the following:

This month's Variable Star of the Season was prepared by Dr. Matthew Templeton, AAVSO.