Generally speaking, no one wants to be the runner-up, to come in second place in a competition. The bride is the one who (deservingly) gets all the attention, not the bridesmaids. In the world of long period variable stars, Mira is the bride, the first of its type to be discovered, and it even lends its name to this class of variables. But in this instance, the maid-of-honor is also deserving of some very special attention. Khi (χ) Cygni (also called Chi Cygni) is a star with its own personality, and continues to provide surprises for observers, and valuable information for professional astronomers. 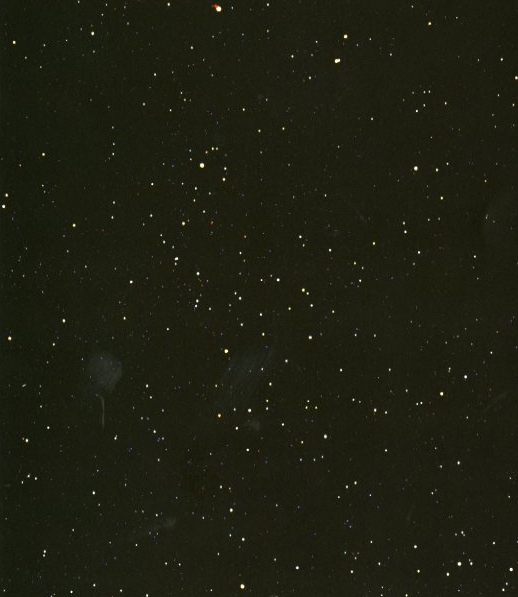 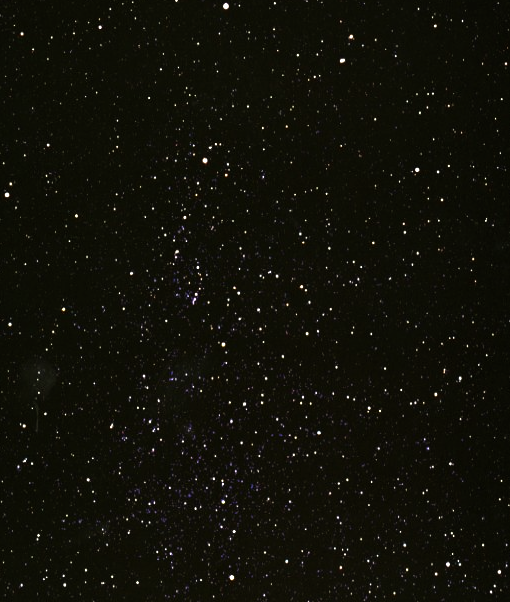 Khi Cygni near maximum (left) and minimum (right) as shown in two photographs of the Cygnus region.  Can you find khi Cyg in these two photographs?  (Hint: you can "view" the two images in two different browser tabs, and switch between the two -- look slightly left of center in the lower portion of the image.) 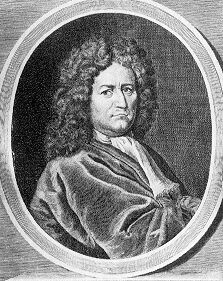 Khi Cygni was first recognized as a variable star in 1686, by Gottfried Kirch (portrait at right). When planning his observing session for Nova 11 Vul (CK Vul), he was unable to see a 5th magnitude star that had been designated χ Cygni by Bayer. He saw the star several months later when it once again reached this magnitude, and realized that it was a variable star, like the previously found Mira (Sterken & Broens 1998). Monitoring this star was originally a family affair, as it was mainly observed by Kirch and later his widow, Maria Winkelmann Kirch, and son Christfried. Sterken and Broens trace the observational history of this star from the Kirch family through the intervening centuries to 1901, and found that the most prolific observers of Khi Cyg included Olbers (105 observations beginning in 1815), Argelander (498 observations beginning in 1841), and Argelander’s contemporary J. Schmidt, who made an impressive 1700 observations of this star between 1845-1884. The star is very attractive to observers due to its large magnitude variation, and the observable variations in its period and light curve. According to the International Variable Star Index (VSX), the range for Khi Cygni is 3.3-14.2 V, with a current period of 408.05 days. By comparison, Mira has an observed magnitude range of ‘only’ 2-10.1, making Khi Cygni a most engaging runner-up indeed!

With the advent of spectroscopy and the spectral classification of stars beginning in the late 1800s, Khi Cygni began revealing some of its other fascinating characteristics. It has a spectral class of S6-S10, making it a rather rare, highly evolved star that has prominent absorption lines due to zirconium oxide in its spectrum.  By comparison, 80% of LPV are spectral class M stars (Lèbre et al.  2014). When it is at maximum, Khi Cygni is the brightest star of its class in the sky. Another S-type star that is a well-observed LPV is S UMa (7.1-12.7 V; P = 225.87 d). Such stars are rare in part because they are going through a (relatively speaking) short-lived stage of a star’s lifespan, when they occupy the asymptotic giant branch (AGB) on the HR diagram. In this phase of life, the star has exhausted the hydrogen fuel in its core, having converted it to helium which was then itself converted into carbon and oxygen. The presence of s-process elements like Zirconium in the atmospheres of these stars indicates that nuclear-processed materials from the star's core are being transported to the star's surface.  Some S-type stars are also carbon-rich, for the same reason -- transport of core material to the surface.  For these stars, the ratio of carbon to oxygen gives astronomers information on the mass of the star, because it takes higher core temperatures (achieved through the higher self-gravitational pull of a more massive star) to fuse oxygen. On the AGB, since fusion has ceased in the core of the star the star’s outer layers are unstable, and are driven outward by the unstable fusion of a shell of helium surrounding the core (so-called helium shell burning). This entire process makes the star rather unhappy, dramatically inflating the outer layers of the star, and triggering convection that spans nearly the entire star from outer core to surface.  Some of the previously produced carbon reaches the outer “surface” (the photosphere), and since carbon compounds tend to absorb blue light, stars of spectral classes R,N and S are redder than comparable K and M spectral class stars of the same surface temperature. This makes them stand out from field stars, a rather convenient property when one is trying to observe the star near its minimum!

The R, N, and S stars are distinguished from each other (and regular K and M stars) by the existence of molecules containing heavy elements such as the previously mentioned zirconium oxide. As an example, see the spectra by Garcia-Hernandez et al. (2007) of several AGB stars to the left, including two intrinsic S-stars at the top.  Note the strength of the ZrO (zirconium oxide) molecular bandhead at 6473 angstroms.  Research over the past few years also suggests that these stars form part of a chemical continuum by their carbon-to-oxygen ratio; in particular, S-stars have a carbon to oxygen ratio of about 1, and therefore have been suggested as a transitional class between AGB stars that are oxygen-rich (M type stars such as Mira) and truly carbon-rich stars of classes R and N (Schöier et al. 2011).

Khi Cygni is a pulsating variable, as are all Mira variables.  Their surfaces move periodically in and out, changing the star's brightness and temperature in the process.  These variations are driven by the same power source -- the opacity or kappa mechanism -- that drives the Cepheid variables and all other stars on the instability strip.  What makes Khi Cygni unique for us is that it's one of the brightest Mira variables in the sky, enabling a great variety of scientific measurements that are more easily done on bright stars.  As a highly evolved star, the outer structure (“atmosphere”) of Khi Cygni is complex, composed of several distinct layers of different temperatures and molecular compositions (Hinkle et al. 1982; Wallerstein 1985; Lacour et al. 2009). In their attempts to test models of AGB stars, astronomers studying this star have made a number of important “firsts”; for example, Khi Cygni is the first LPV discovered to have a magnetic field (Lèbre et al. 2014) and it is the first S-type star to have been found with water in its spectrum (Justtanont et al. 2010). Because it is a large star and changes in size as it pulsates, it has been a target of interest for astronomers measuring the diameters of stars through interferometry (Christou & Worden 1980; Young et al. 2000; Lacour et al. 2009). Due to the complex atmospheric structure, the diameter measured depends in part on which layer is measured (which, in turn, is related to the wavelength used to make the measurements). The photosphere of the star varies in size by about 40% over its cycle, and is largest when it is dimmest (as the gas is coolest at this time). There is also evidence of brighter patches on the photosphere when the star is at maximum (when the photosphere is smallest and hottest). An animation of this cycle (created through infrared images) can be found at http://www.cfa.harvard.edu/news/2009-23 (Lacour et al. 2009). 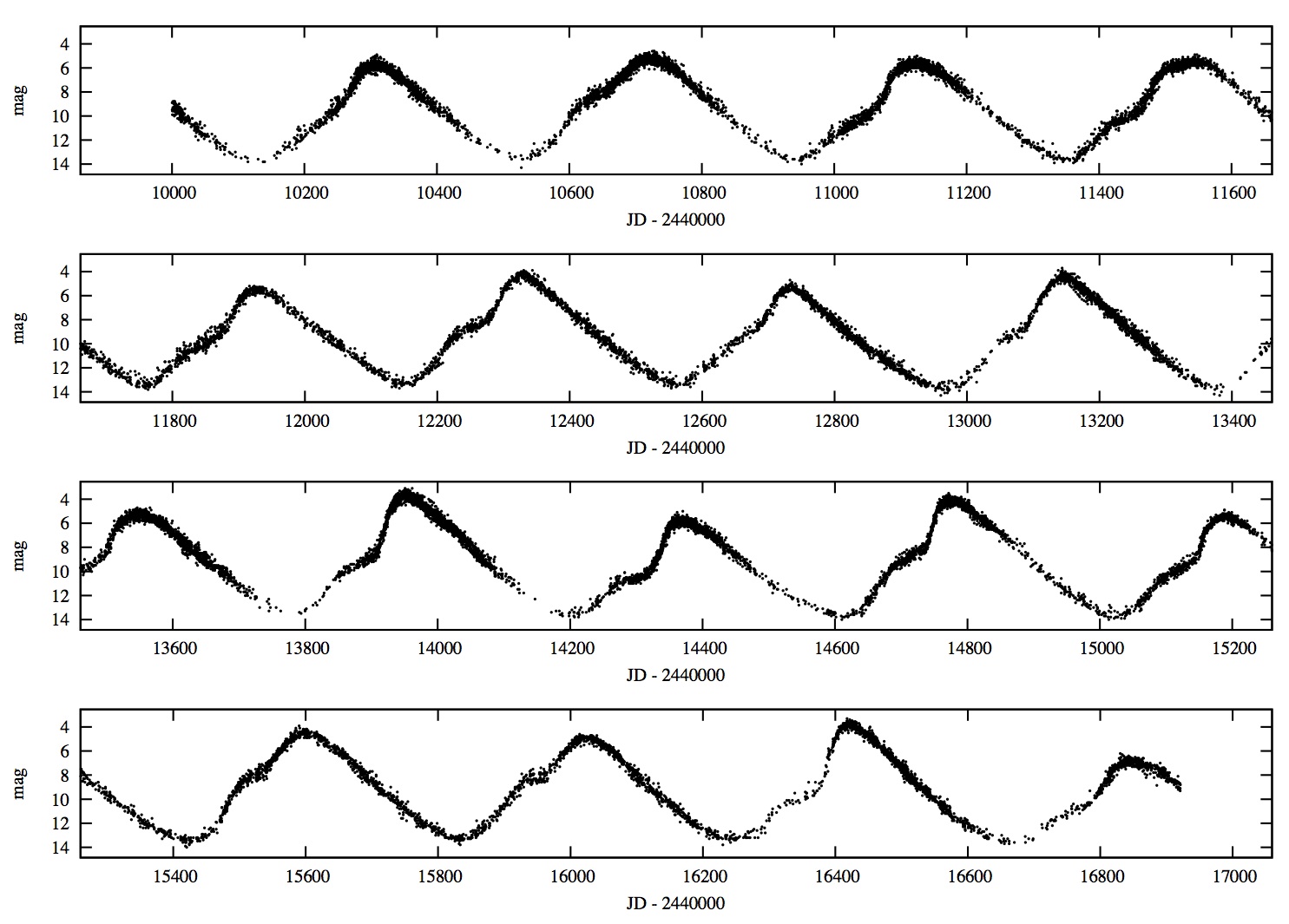 As with many famous variable stars, research by professional astronomers has relied upon the observations submitted by AAVSO observers to determine predicted maxima and minima, for example Lèbre et al (2014), Lacour et al (2011), Wallenstein (1985), and Hinkle et al. (1982). On August 31, 2014, there were 79744 observations of this star in the AAVSO International Database. Several thousand of these were recently added to the database through the ongoing digital archive work of Kevin Paxson (PKV) to capture archival variable star observations in the pre-1911 astronomical literature. Kevin’s valuable service to the AAVSO has now reached approximately 105,000 digital contributions. In the case of Khi Cygni, Paxson digitized over 4000 observations made between 1686 and 1901, including those by Argelander, Kirch, Olbers, and Schmidt, from a 1906 German work, the University of Strasbourg dissertation of Hans Rosenberg.

Despite its centuries of observations, Khi Cygni continues to surprise observers. In the summer of 2006 it reached a magnitude of about 3.8, its brightest maximum since the mid-1800s. Then in the summer of 2014 it only reached about magnitude 6.8, a full three magnitudes lower. The period of the star also varies from cycle to cycle, and has slightly lengthened over time, behavior that is sometimes seen in Mira variables (C. Sterken & E. Broens 1998; C. Sterken, E. Broens & C. Koen 1999).  These changes, plus the fact that astronomers have several centuries of observations of Khi Cygni, make it an important member of the AAVSO LPV Legacy Program. So in the case of Khi Cygni, never has being “only” a bridesmaid seemed so good.