A Look at U GEM

"...predictions in regard to this uncertain star can be better made after the fact." - J.A. Parkhust, Review of Popular Astronomy, 1897. 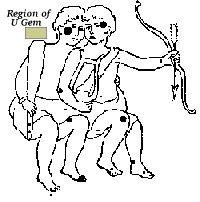 U Gem is a dwarf nova type cataclysmic variable. It is a compact, interacting binary system made up of a primary star which is a dense, small, hot white dwarf, and a secondary star that is a cool, red (M spectral type) main sequence star. The two stars orbit around each other at very high speeds. It takes 4 hours and 11 minutes (1) for the stars to spin around one another. Just imagine the earth orbiting around the Sun at such a speed!

In this system, the secondary star is so close to the primary that it loses material from its surface towards the primary. This material collects in a disk, called an accretion disk, around the primary. At quasiperiodic intervals - in U Gem, about every 100 days or so - instability that occurs in the accretion disk or in the secondary star triggers an increased amount of matter to accrete (fall) onto the primary (white dwarf), creating the explosions (called eruptions or outbursts) that cause the system to brighten up. It is like an atom bomb exploding!

Take a look at this light curve of two U GEM outbursts. Notice it has two types of outbursts, one narrow and one long and a bit brighter. Lewis M. Cook, in his paper, "The Frequency of Outburst of the Dwarf Nova U Geminorum" (Journal of the AAVSO, Vol. 16, No. 2, p. 83, 1987) analyzed the long-term AAVSO data and found that the distribution of the outburst duration seems to be double-peaked at nine and 16 days.

U Gem not only has outbursts, but also interesting eclipses of different shapes (see AAVSO Alert Notice 204) Remember how fast these stars move about each other! Every 4 hours and 11 minutes the larger star can block out the hot, white dwarf and the accretion disk around it, thus causing the eclipses as seen from the Earth. Some of the eclipses can be seen in the light curve above as short lines between magnitudes 14 and 15 -- actually they are very closely spaced observations that appear like lines when printed at this scale.

The description below of a U GEM eclipse comes from Dr. W.J. Worraker of The British Astronomical Association Variable Star Section (reprinted with permission).

It's(sic) V magnitude in quiescence is typically 14.6 about 2 hours before an eclipse is due. The orbital hump starts about 1.7 hours before the eclipse; the light level increases steadily to a maximum of V = 14.0, 30 minutes before mid-eclipse. The eclipse begins about 15 minutes later with V = 14.2; the initial drop in brightness is very sharp. Minimum light is at V = 15.1, after which the light level recovers quickly to V = 14.4. The total eclipse duration is about 20 to 25 minutes. In the next 2 hours the system fades back to V = 14.6.

The following was written by former AAVSO Director Margaret Mayall in the February-March, 1964, issue of The Review of Popular Astronomy:

This variable is the typical star of its class and was the first to be discovered. J.R. Hind, an English astronomer in charge of a private observatory in Regents Park, found a previously unlisted star in the constellation Gemini to be nearly 9th magnitude on December 15, 1855. A few days later, it had dropped to below the 13th magnitude. This sudden rise and decrease had never before been observed in a star and it caused a great deal of interest. When Pogson found it again bright 100 days later, on March 24, 1856, a group of English astronomers banded together and agreed to keep a close watch on the star and communicate with each other by telegraph whenever they observed it bright.