It has been said many times that variable star astronomy is one of those rare endevours where amateurs can not only contribute to real science and discovery but indeed amateurs are actually essential to the process. The story of V838 Mon is yet another case that illustrates this relationship perfectly and will surely evolve into a classic example. It's a collaboration between visual and CCD observers, brand new amateurs and seasoned professionals, and begins with a pair of binoculars and ends with the Hubble Space Telescope.

On Jan 6.6, 2002, N. J. Brown (Quinns Rocks, W. Australia) was examining photographic images he had taken the night before as part of a nova patrol. These patrols usually involve taking pictures of the same area of the sky on different nights and comparing the results. If a bright new star appears, it may be a nova (literally meaning "new star"). Brown compared his image with one of the same field taken 15 days earlier. A new object existed so Brown contacted the IAU Central Bureau of Astronomical Telegrams (CBAT) located at the Harvard-Smithsonian Center for Astrophysics (a few blocks away from AAVSO HQ).

Dan Green, CBAT Director and astronomer, sent a request for confirmation out to a select list of observers including the AAVSO. Confirmation is needed because many transient events in the sky can be confused with novae, as can film processing errors, star ID errors, etc. A CCD image of the nova field and preferably a spectra are needed for confirmation.

It was surprisingly difficult to get confirmation of this report. Poor weather was the chief culprit. This is one area where the AAVSO excels. With global coverage weather, geography, and time are usually of little concern. We sent out a request to a handful of CCD observers located across the globe. Peter Nelson in Australia, Charles Scovil in the USA, and Arto Oksanen in Finland were able to image the nova. Peter had to deal with heat and humidity interfering with his CCD chip while Arto had to enlist the help of a friend, J. Solonen, to clear snow from his observatory! At the same time the author went to the Harvard College Observatory Plate Collection and looked for prior outbursts of this nova. All of this was reported to the CBAT and IAUC Circular #7785 was issued announcing the discovery of Nova Mon 02 on January 10 2002.

Jim Bedient, an AAVSO member in Hawaii, searched the online Stardial database of images to look for prior outbursts of Nova Mon 02 (V838 Mon). Stardial is an ongoing survey of a thin strip of the sky around the celestial equator. V838 Mon's location just happened to fall within this strip and Jim was keen and experienced enough to realize this. He surveyed 141 nights of data and did not find the nova on any of the images prior to the first image taken in the nova patrol on December 22. However, he did get many observations of V838 Mon in the days between December 22 and the IAUC announcement on Jan. 10 suggesting the outburst began around Jan. 1st. This is important data that would not have been available to researchers without Jim's iniative. This was an excellent use of the Stardial resource and a perfect example of how online surveys and data mining can be used to complement regular observations.

At this point the AAVSO created charts for the object and issued Alert Notice #292 on the same day (Jan. 10). Visual observations made with binoculars and small telescopes began to pour in. For professionals things began to get interesting early. The spectrum did not match that of a typical nova. Numerous P-Cyg profiles were detected along with Balmer emission lines and a very weak (instead of strong) H-alpha emission line. But for our observers, so far this was a typical nova: fairly bright and slowly fading.

That all changed in February. V838 Mon dramatically brightened from visual mag 11-12 to visual mag 6.5 in about a day! This is an increase of around ten thousand times its original brightness. The author remembers being at a friend's house watching the local football team win the Superbowl when he received a call from Janet Mattei. A new chart needed to be made and a News Flash sent quickly.

The Hubble Space Telescope joined the fray at this stage. The AAVSO was contacted by colleagues from The University of Tubingen (Tubingen, Germany) and the Space Telescope European Coordination Facility (Garching, Germany) and asked to correlate observations with an HST observing run on Feb. 9 at 23UT. HST went on to observe the object four more times. An amazing full color image was presented at the AAVSO Fall Meeting in a paper by Arne Henden and will be publicly released by the Space Telescope Science Institute in the next few months. Don't miss it, it is one among the most beautiful of HST images.

Over the next couple of weeks V838 Mon began to slowly fade again only to give one last encore performance in the beginning of March, when it brightened yet again, this time from around visual mag 9 to visual mag 7.5 over a the course of a few days.

Echos In the Dark

On March 25, IAUC 7859 included the first announcement about the discovery of a light echo around V838 Mon using the USNO Flagstaff Station 1.0-m telescope. AAVSO Council Member Arne Henden (Universities Space Research Association and U.S. Naval Observatory (USNO)) along with U. Munari (Padova) and M. Schwartz (Tenagra Observatory) announced that a light echo was first detected on February 17 and had continued to grow in size as the object faded. This light echo would go on to prove one of the most interesting (and beautiful) traits of a very enigmatic star. The only previous nova light echoes were detected in 1901 and 1936.

During the outbursts, the spectra evolved away from that of an ordinary slow nova and has remained outside any known category of star. At its peak, the spectrum was similar to stars such as FG Sge, V605 Aql, and Sakurai's object. These are stars that are believed to be reentering the Asymptotic Giant Branch (AGB) of the H-R diagram, a time near the end of their life where they expell material. However, the spectrum has cooled significantly since then (and continues to do so). The light curve plus other details such as a moderate wind velocity and steadily decreasing ionization prevent V838 Mon from being classified as a regular nova.

During the summer the professionals really worked hard on this enigmatic object. Many HST images were taken using the Advanced Camera for Surveys (ACS). Peter Garnavich put together an animated GIF of some of the HST images which dramatically illustrate the expansion of the echo. 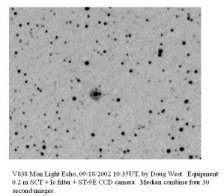 When V838 Mon emerged from behind the Sun in November the light echo was large enough that amateurs could get into the act. Doug West took these images of the light echo using a .2m SCT and a CCD w/Ic filter. (right) The light curve of V838 Mon has stablized around a V mag of 16. However, there are some indications that it is increasing in brightness in the R band.

The closest analogs to V838 Mon may be two stars that evolved into M class supergiants after outbursts. One of them is a very red star discovered in 1989 in M31 called appropriately enough "M 31-RedVar" (Rich et al. 1989) and also V4332 Sgr (N Sgr 94#1). The similarities between the three includes a cool red supergiant spectrum during outburst and Balmer and P-Cyg profiles during outbursts. V4332 Sgr's progenitor was a main sequence star while the progenitor for the red variable in M31 was not detected prior to outburst. However, not much else is known about either object and light echos have never been detected around either object.

The progenitor object for V838 Mon was likely an F class main sequence star (with a temperature around 6650° C [12,000° F]) and hovering around V=15.6 mag. Prior to the outburst, there was no known indication of any movement of the star off the main sequence. The most popular theory contends that V838 Mon has very quickly evolved from a main sequence to a red supergiant star. Most of the time this takes hundreds or thousands of years, not months!

V838 Mon is going down as one of the strangest and most interesting stars discovered. Much data has come in thanks to all the latest and greatest equipment now available to astronomers but the jury is still out on what is going on. Papers are being published in journals as rapidly as they can be printed. We will keep you informed on the latest (mis)understandings of this star.

It is amazing to think about how such a high profile object fit into the scope of the mission of the AAVSO and amateur astronomers. The AAVSO joined this mystery from the beginning and has collected the most visual and CCD filtered data of any organization. Without Bedient's efforts with Stardial, important early observations of the object may never have been found. Without AAVSO confirmation more days of observations may have been wasted waiting for the discovery announcement. The early visual observations of V838 Mon were made at a brightness that would saturate the CCDs on many professional observatories. Also, the careful monitoring of the star helped plan and guide four separate observations of the object by the Hubble Space Telescope and other professional observatories.

Finally, the high quality visual and filtered CCD observations provide a treasure trove of observations to professionals to who need all the data they can get to figure this star out. The AAVSO has already received 6 official requests from researchers for the data we have on V838 Mon. Additionally, the light curve has been downloaded over 4,500 times and the Quick Look data downloaded over 2,000 times from our web site.

This is an object that brought together all the strengths of AAVSO observers:

But just as importantly, this has proven to be one very fun star to follow. It has reminded us about how much we know about stars, how much more we don't know, and why we are doing this to begin with!

References are linked in the article. Below are URLs for more information.