Nova Sgr 2015 No. 2 was discovered by John Seach (Chatsworth Island, NSW, Australia) at DSLR magnitude 6.0 on 2015 March 15.634 UT. It brightened to V=4.3 by March 21, and has undergone five subsequent re-brightenings, the last to V=5.7 on June 1. Since then it has faded steadily to V=8.2 on June 15, 1.6 magnitudes fainter than its faintest previous minimum since outburst. For a light curve of observations in the AAVSO International Database, see below.

The Spitzer Space Telescope may observe this classical nova if it can be diverted from its current mode and target. Several professional astronomers are planning observations with other instrumentation.

Photometry and visual observations, spectroscopy, and polarimetry are strongly encouraged. Near-infrared observations (J and H bands) would be particularly helpful.

Please submit observations to the AAVSO International Database using the name "NOVA SGR 2015 NO. 2". Once a GCVS name has been assigned, please use that name. 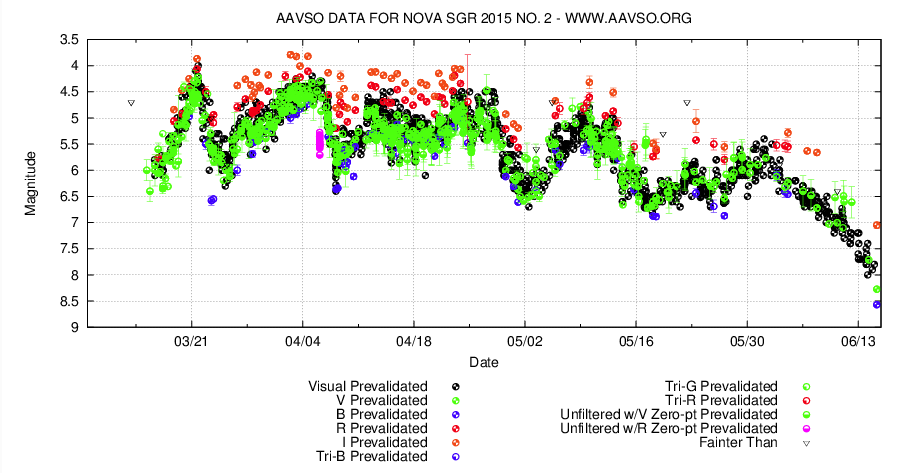 An Alert Notice archive is available at the following URL:
http://www.aavso.org/alert-notice-archive

Subscribing and Unsubscribing may be done at the following URL:
http://www.aavso.org/observation-notification#alertnotices