Annual Report of the AAVSO 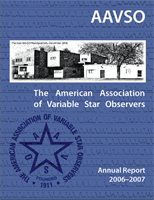 The Annual Report of the AAVSO briefly describes the activities and program updates of the AAVSO over each past fiscal year, and provides general information about the organization. Sections of the Report include a Letter from the Director, Treasurer's Report, and lists of the AAVSO's donors and volunteers.

In report years prior to 2018-2019, "The Year in Review" section of the Report contains all of the Association-related items which previously appeared in the Journal of the AAVSO: the Spring and Annual Meeting Minutes (through 2015-2016), lists of new members, deceased members, observer totals, and committee reports. Reports for these years also contained Minutes of the four Council meetings held each year, letters of support from professional and amateur astronomers (through 2015-2016), and information about planned giving. Reports on variable star observing campaigns, AAVSOnet, APASS, and the Journal of the AAVSO (including Editorial Board, Editorial Staff, and titles of papers and abstracts published in the past year's Volume) were also included.