Variable stars are classified into types based on their amplitude, period, temperature, light curve shape, and various other parameters.  Stars that change in brightness due cyclical changes in size are collectively referred to as pulsating variables.  Stars are generally stable over much of their lifetime, and only slowly grow or shrink, brighten or fade as they gradually evolve over millions or billions of years.  Pulsating stars, however, show cyclical changes in size and brightness in a matter of days or even hours.  A pulsating variable star generally has a region within it that varies between being opaque and transparent to the energy streaming through it from the core. This region is very sensitive to pressure and temperature; a slight change switches between the opaque and transparent states. In the case of pulsating stars in the instability strip in the Hertzsprung-Russell (HR) diagram, this region is a layer of singly-ionized helium.  If the star contracts slightly there will be a corresponding increase in temperature, in turn causing some of the helium to lose an additional electron to become doubly-ionized. This ionization requires energy - the helium absorbs some of the energy flowing out of the fusion region in the core and the star dims.  This region then expands as electrons are released by the ionization process and the doubly-ionized helium cools and recaptures the free electrons.  The energy that was absorbed to form the doubly-ionized helium is released as the electrons are recaptured and the star brightens.

There are many different recognized types of pulsating variable stars, based on period, brightness range, star temperature, and other factors.  The AAVSO SPP Section focuses on pulsating stars whose periods range from a few hours up to approximately 100 days.  This range includes several important classes of variables.  These stars are very important to stellar structure and evolution studies but also play an important role in the study of the universe and its origin and future.  Details on several important short period pulsating star types are discussed in detail below.

Classical Cepheid variables are yellow giant and supergiant stars that have pulsation periods between 1 and 100 days, or more.  They are one of the most important classes of variable stars, forming the basis of thedistance ladder that enables astronomers to determine the distances to distance galaxies.  Cepheids are rather common and intrinsically bright and are easily observed in nearby galaxies.  As Henrietta Leavitt discovered in the beginning of the 20th Century, there is a direct relationship between their periods and absolute magnitudes.  Simply by measuring the period and apparent brightness the distance to any Cepheid can be calculated.  Astronomers can use Cepheids to measure the distances of nearby galaxies, enabling them to calibrate secondary distance "yard sticks" that can be used to estimate the distance to distant galaxies where Cepheids are too faint to be observed.  These giant stars are quite bright intrinsically, and a number of naked eye stars are members of this class. Their brightness make them suitable for low cost digital photometry with digital SLR (DSLR) cameras and webcams.  An example light curved collected with an inexpensive "camera on stick" by Gerry Samolyk of delta Cephei, the prototype of this class is shown below 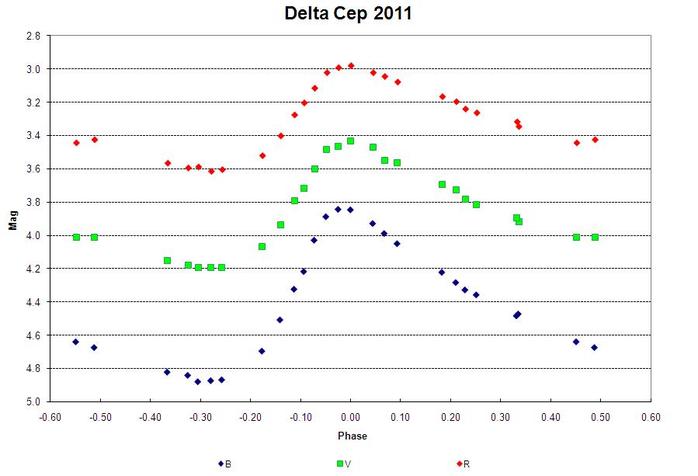 RR Lyrae stars are smaller and fainter than Cepheids; their smaller size allows them to pulsate more rapidly, typically with a period between 8 and 24 hours. These stars are sometimes call "cluster variables" because they are often found in globular star clusters.  Like the Cepheids these stars are very useful for determining distances.  Unlike Cepheids, however, RR Lyrae stars all have approximately the same absolute brightness, independent of pulsation period.  Both Population I and Population II RR Lyraes stars are common, and the absolute brightness is slightly dependent on metallicity, but in general RR Lyrae stars all have an absolute magnitude of approximately +0.6.  The distance to an RR Lyrae star (and therefore the cluster containing it) can be determined by simply its apparent brightness and estimating the dust absorption.  This short movie highlights the brightness variations of several RR Lyrae stars in a globular cluster, nicely illustrating the changes these stars show over the course of just a few hours.  A large fraction of RR Lyrae stars exhibit a gradual, cyclic change in light curve shape and/or amplitude that has a typical period of 10-100 days.  This variation is referred to as the Blazhko effect and its cause is still not understood.  Stars exhibiting the Blazhko effect are important targets for further research as astronomers attempt to unravel its cause or causes.

Smaller and fainter still are the delta Scuti stars.  They are similar to RR Lyrae stars but are typically have periods of just a few hours and amplitudes of tenths or even just a few hundredths of magnitude.  These stars are more challenging to observe due to the small variations in brightness, and are only suitable for CCD work.  Many delta Scuti stars have more than one pulsation period, and the resulting light curve is very complex as the different periods interact.  One example is VX Hya where two periods, both close to 5 hours, interfere or reinforce each other over time.  The result is a light curve that exhibits wide variations from night to night, as shown below in this graph of just six days of data.