Welcome to the AAVSO Exoplanet Section

ANNOUNCEMENT:  With the launch of TESS (Transiting Exoplanet Survey Satellite), follow-up ground-based observations will be an important part of the TESS process to confirm candidate exoplanets. In particular, such observations will help distinguish false positives from true exoplanet transits.

The AAVSO is pleased to announce that it has established a program that will facilitate the participation of its members in this process. More information on this program can be found by clicking here.

Thank you for visiting the web page of AAVSO's Exoplanet Section!

Astronomers now believe that most stars have one or more planets orbiting around them. These planets are called “exoplanets” (extrasolar planets). As an exoplanet orbits its host star, the light from that star will vary by some amount. The small change in light of this host star can be observed from Earth if the planet’s orbit is in line-of-sight with an Earth-based observer and if the planet is large enough and close enough to its host star that a dip in the star’s light can be detected. Changes in the star’s light can also be indicative of a star flare, or the passage of an exoplanet in front of a star spot (much like our own Sun’s sunspot).

For AAVSO Exoplanet Observers who would like to help refine the ephemerides of already confirmed exoplanets (such as their period, transit midpoint, and transit depth), a target list of some 68 confirmed exoplanets has been culled from NASA’s Exoplanet Archive that are believed to be observable by those with a modest complement of instrumentation (i.e., a minimum 8” aperture telescope, a monochrome CCD camera, at least one standard photometric filter, and reasonably good autoguiding and seeing conditions). This target list was derived using the following criteria for each exoplanet:

A plain text file of this target list can be downloaded from AAVSO Exoplanet Target List. A user-friendly transit finder developed by Eric Jensen of Swarthmore College can be used to determine which targets on this target list produce a transit at a user-specified location on a given night or range of nights (see here).

Some resources that are available to assist amateur astronomers in conducting exoplanet observations include:

1.  "A Practical Guide to Exoplanet Observing," which includes best practices for exoplanet observing, as well as a tutorial on using AstroImageJ. The latest version of the Guide, as well as sample exoplanet observation images and other tutorial material, can be found here.

2.  AstroImageJ, freeware that has become the de facto standard for exoplanet differential photometry and analysis by both professionals and amateur astronomers, can be found here.

3.  AAVSO CHOICE courses on Exoplanet Observing  provide participants with the knowledge to conduct exoplanet observing, as well as on the use of AstroImageJ.

In 1995, 51 Pegasi b was the first exoplanet detected around a main sequence star. Since then, over 5,000 exoplanets have been confirmed by Kepler and other space and ground-based observatories.

Amateur astronomers have been successfully detecting exoplanets for at least a decade, and have been doing so with amazing accuracy! Furthermore, they have been able to make such observations with the same equipment that they use to create fabulous looking deep sky pictures or variable star light curves.  Amateur astronomer observations have also provided valuable data in support of exoplanet research.

In 2004, a team of professional/amateur astronomers collaborated on the XO Project, which resulted in the discovery of several exoplanets. Except for this project, most of the amateur exoplanet efforts so far have been to detect already “discovered” exoplanets. These observations have helped to refine the ephemeris of these already known exoplanets. The mere fact that amateur astronomers can “repeat” these discoveries means that it is also theoretically possible for them to discover new exoplanets!

The dominant technique used thus far to detect exoplanets by both professional and amateur astronomers has been the Transit Method. This method looks for a dip in the light curve of a distant star, which is typically indicative of a planet transiting the face of that star. The Transit Method has proven successful for Jupiter-size planets that are orbiting close to their host star and have an orbital plane that is in line with our view from Earth. With the Transit Method, at least two critical properties of an exoplanet can be determined: the size (radius) of the planet itself and the radius of its orbit around the host star. Knowing the period of the planet’s orbit around the host star, the inclination of the exoplanet’s orbit with respect to the Earth’s line-of-sight can also be determined.

To determine other properties of the exoplanet such as its mass and thus bulk density, another technique called the Radial Velocity Method is used. This technique relies on the fact that a planet orbiting a distant star will cause a slight “wobble” of the star (and the planet itself). Then, through precision spectroscopy of the Doppler shift in the star’s spectrum, the mass of the planet can be determined.  The Radial Velocity Method is also used to determine the phase (and thus the period) of an exoplanet’s orbit around its host star. There have been a few successful attempts by amateur astronomers to use this method, but the cost of the high precision spectroscopy equipment to do so has been a barrier to more wide-spread Radial Velocity measurements by amateurs.

Two other more methods that are currently being used by professional astronomers to characterize the properties of exoplanets are that of microlensing and direct observation. Microlensing relies on Einstein’s now confirmed prediction that a massive object (such as an exoplanet’s host star and planetary system) can act as a lens that will cause light from a distant source (a background star) to bend.  A change in the light curve of the lensed background star is then indicative of the planetary system’s passage in front of the background star. A dip in this light curve is then further indication of the presence of an exoplanet orbiting its host star. Direct observation of exoplanet’s have been successful in a few cases, but future generations of space-based telescopes, their accompanying “star shades,”  and  ultra-sensitive spectroscopy instruments, should be able to help reveal the composition of an exoplanet’s atmosphere.

Nearly all of the exoplanet discoveries to-date have been within our Milky Way Galaxy (Figure 1). The Kepler mission has used the Transit Method for exoplanet detection and has been responsible for most of the exoplanets discovered to date. The original mission was directed into an area of the same spiral arm of the Milky Way that is home to our solar system. However, due to loss of a reaction wheel, the Kepler mission then focused on fields of opportunities along the ecliptic plane. While most Earth-based observations have been in the vicinity of our solar system, recent microlensing techniques have focused on observations toward the Milky Way’s galactic bulge. This allows astronomers to take advantage of the density of stars between us and the center of the Milky Way where there is a greater chance of a planetary system passing in front of a distant star.

Of all of these methods for detecting exoplanets, the Transit Method is the one most suited for use by amateur astronomers.

The key to the Transit Method is the Light Curve (Figure 2). 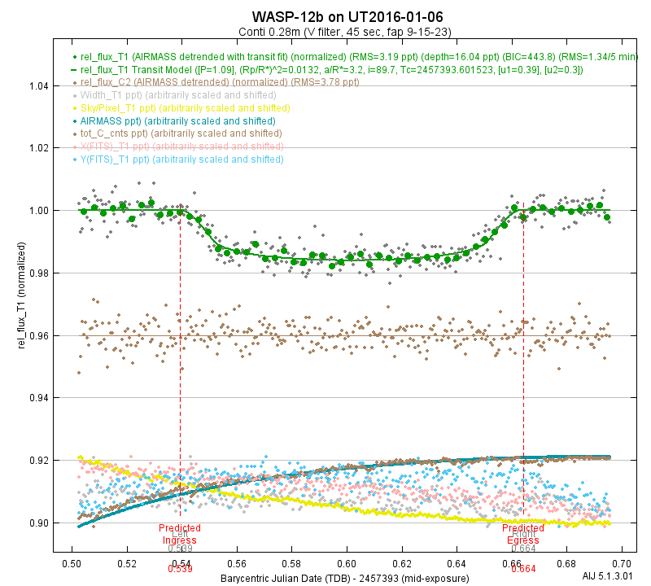 So, how does an amateur astronomer actually create a Light Curve?

Multiple images are first taken of the host star along with other comparison (“Comp”) stars in its vicinity. With a typical transit taking up to 3 or more hours, exposure times ranging from a few seconds to 2 minutes for each image, and an imaging session covering 1 hour before and 1 hour after the transit, over a 1000 images are sometimes needed to cover the duration of an expected transit.

Photometry software, such as AstroImageJ, can then be used to compute the changes in brightness of the host star using a technique called differential photometry. Differential photometry computes a host star’s magnitude changes by comparing the brightness of the host star with one or more presumably non-variable Comp stars. To compute each stars’ magnitude, the photometry software will allow the amateur astronomer to define an “aperture” and “annulus” that is placed on the host star and each Comp star (see Figure 3). The brightness area in the annulus (a measure of sky background) is then subtracted from the brightness in the area of the aperture to obtain a corrected measure of the each star’s apparent brightness. Instead of a change in magnitude, some exoplanet surveys use relative changes in flux between an ensemble of comparison stars and the host star as a measure of the depth of the Light Curve.

One of the advantages of differential photometry is that the difference in brightness between the host star and the average of one or more Comp stars is important, rather than the absolute magnitude of each star. Thus, the influence of such factors as light pollution, background sky glow and passing cirrus clouds that have a common effect on the brightness of all stars in the image is eliminated.

To complete the post-processing process, the amateur astronomer uses software, such as AstroImageJ, that will then fit the data points to a representative Light Curve and compute the depth of the transit, as well as the transit’s beginning and end times.