Well I am taking you up on your word.. this is almost obviously embarrasing.

I am working with a BVR set of filters and I am unsure how to set the exposure time . I have a 16803 camera and  realize that the energy passing thru each filter is rather different for some objects. Am I correct in picking the hottest filter (say V) and set the exposure time for it to be at the upper linear area of my chip (say 35000), with the attendant expectation that R and  B will have lower values? Is that how most objects are done?

Don't get hung up on trying to calculate appropriate exposure times. The simplest way to determine them is to take a relatively short exposure in each filter (say 10 sec), measure maximum ADU value in the target, check and comp stars then adjust exposure length to ensure the brightest star remains in your camera's linear range (preferably about 50% to allow for improved seeing during the imaging session). Cheers,

I agree with Mark; just experiment.  Every star is different.  Miras, for example, are very red, so the B exposure is long and Ic is very short; cataclysmic variables might have the same exposure time in every filter.  Taking short exposures to start with is a good way to make sure that you don't saturate, and then adjust the next set of exposures accordingly.  You'll soon learn typical exposure times for the types of objects you like to observe.

Extreme color does complicate exposing for Miras (and some other long-period variables), but equally important is the extreme magnitude range across a Mira's cycle.  This has two results: (1) February's exposure times may not be so useful in March. (2) Suitable comp stars are simply unlikely to be available for the entire cycle in all filters, especially in B where Mira brightnesses can vary by more than 10 magnitudes in a single cycle.

So, exposure estimation is not a one-time operation per Mira. One must frequently revise each Mira's exposure time in each filter--for Miras certainly monthly, for short-period or high-amplitude Miras often weekly. It doesn't have to be perfect (else we wouldn't need the observation!), but it should come within a 0.5-1 magnitude or so, unless devoting extra camera time to bracketing. (I've automated the estimation of my exposure times for every Mira, in every filter, for every night. Speaking strictly for myself, I couldn't sustain doing it manually.)

Eric's technique of using a program and dynamically adjusting the exposure times for Miras, depending on their current light curve phase, is a good one, though complex.  I used to do that manually at NOFS.  Since I was at the telescope, I could take an initial image and adjust exposure times accordingly.  Miras are not easy to monitor, not only because of their extreme variation and color, but also in selecting comparison stars.

Another technique that Walter McDonald pioneered (as best as I can tell!) is to find the total exposure time necessary for, say, S/N=100 at the Mira's minimum.  Then find the maximum exposure time before saturation at maximum.  Use that maximum exposure time, and derive the number of subexposures necessary to get the total exposure time at minimum.  That gives you an exposure, and the number of exposures, to use as a single setting to monitor the star.  You never saturate, you always have enough signal no matter what phase the star might be in.  At minimum, you have just enough total exposure time.  At maximum, you have too much exposure time and get more precision than perhaps necessary, but at least you don't have to adjust your plan.  That concept can sometimes allow you to use a single comp star throughout the variation range, since you effectively have a larger dynamic range in the stacked image.

As a chemist I always conduct empirical evaluation first. It doesn’t take long to determine “typical” exposure durations for different types of stars at different magnitudes with your own filter/camera that you use regularly. However, it remains more difficult when you use multiple different telescopes like those offered by remote telescope services since it costs money to take test images!

The relative exposure lengths for different star types in different filters first depends on the spectral energy distribution of the source (target variable). I’m sure you have seen such a graph as shown below: 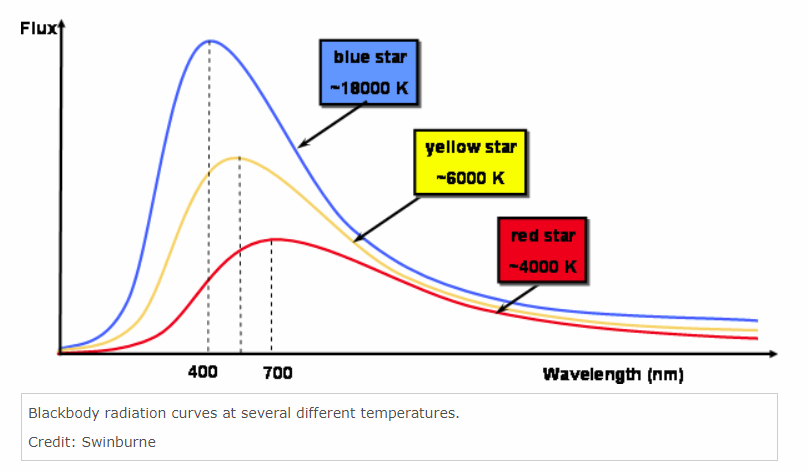 This shows quite clearly at what wavelength the maximum number of photons/sec is emitted from different color/temp stars. This would tell you that for a Mira you would need a longer exposure in V and certainly B than in I. If the flux scale were defined more carefully, it would tell you the relative exposure ratio IF no other factors applied. Unfortunately, they do!

What effect does the filter impose on the photon transmission? You have seen the typical filter bandpass distribution: 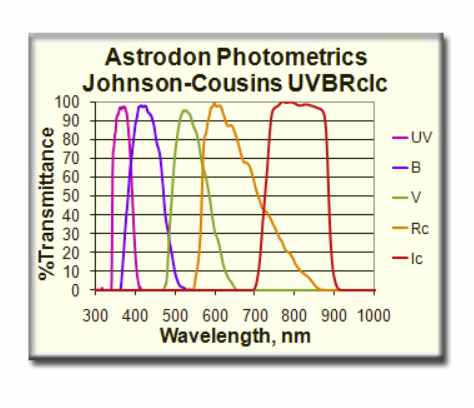 IF you believe the relative %Transmittance scale for each filter on this graph, the same number of photons are transmitted at each peak wavelength. That is, 100% Transmittance means almost ALL photons are transmitted at the peak wavelength in each bandpass. Obviously, the Transmittance falls steeply to either side of the max across the bandpass. So we may pick a filter that matches the peak energy distribution for a particular type of star. Of course, we generally start with a V filter because that is the standard choice for most photometry to support the AAVSO database.

Finally, the relative exposure depends on the sensitivity (quantum efficiency) of the CCD. When you look at this graph you see how poorly a silicon substrate may respond to B and I wavelengths that are further away from the visible spectrum where our eyes are most sensitive. For a front illuminated ccd, the peak QE is near the red end of the spectrum, where two photons may excite one electron. It gets much worse (1/2?) at the blue end (<500nm). So you need 2x longer exposure for a B filter than V filter. For the red (R) end (>635nm?), it is similar to V. For the infrared (Ic) (>700nm), it is a little worse, so you need a slightly longer exposure. 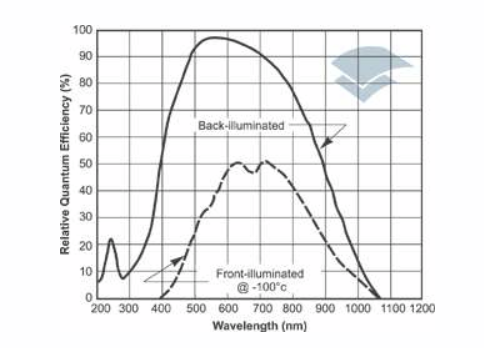 So you could try to overlay each of these curves to determine/calculate what relative exposure to use for each type of star with your system filter/ccd. I think you can see that observation/experience may actually be easier than mathematical logic?

"I think you can see that observation/experience may actually be easier than mathematical logic."

Here's my rule of thumb.  As Ken mentioned, I'll first experiment to get the V filter exposure.  For "normal" stars ( say class F, G, K ) to get a somewhat similar SNR I'll use the same exposure for Ic and two and a half times that exposure for B.  (Astrodon filters, ST8xme and ST1001e CCD's)

For red stars, I'll use the same multiple for Ic (as long as this stays linear), then experiment to get the right B exposure.

Another consideration is tracking vs guiding.   If you experiment to find the longest exposure that reliably gives good (untrailed) images, you can use this as your default sub exposure time.  Then use stacking to reach the necessary total exposures for each filter.

May I offer a few comments on the above:

1. One should not "choose one filter that best matches a Mira's spectrum". One needs at least two filters to make transform corrections, which for Miras have huge benefit. Especially if multiple observers are involved, Mira magnitudes require transforms.

2a. For experimental planning, it's unclear that one can overlay black-body curves to determine relative exposures, as the star temperature isn't known in advance (and the temperature changes rapidly during Mira cycles anyway). And LPVs can be pretty far from black bodies in any case.

3. Spectral analysis, which I have also done in some detail (SAS 2014 presentation) helps in making some strategic decisions ("don't rely on B-V color for Miras"), but I've never seen it work by itself for estimating the next night's required exposure times. Simply extrapolating recent light curves (esp. quadratic) can work embarrassingly well; Kalman filter projection would probably work even better (there's a backtesting paper in that for someone). Magnitude projection via cycle phase, which I do and which Dr. Henden was doing long before me, seems to work best of all, though it's laborious and error-prone to do manually. Then, provided one's optical system is characterized in that way, exposure time estimates follow directly.

4. Contrary to conclusions from some spectral considerations, actual experimental Mira exposures in I are practically always shorter than those in R, often by a factor of 3-5. Relying on sensors' QE curve to estimate relative exposures sets a trap, here: Miras' colors are so extreme that the star flux difference between passbands completely dominate relative exposure. While sensor sensitivity may well differ by a factor of 2 between R and I, Mira fluxes often differ by a factor of 40 (4 magnitudes R-I).

Note on 1, 3, & 4: Our generally accepted language doesn't help here; we all gloss over the difference between filters and passbands.

5. Separately from the above: in observing Miras, comp star unavailability is often the worst point of failure, even more than estimating exposure times. Often the difficulty is that many AAVSO comp star sets were not chosen to cover the Mira's extreme magnitude range (or that range wasn't known); in the worst cases, woefully common, a sufficiently wide range of comp stars simply doesn't exist in the surrounding sky region--and that problem I really don't know how to solve elegantly.

I interpreted Stan's basic question to be related to determining relative exposures with BVR filters for all types of variables. I think my discussion addresses the primary phenomena that can be reviewed to answer that question? I did use the word Mira once but I did not think that the level of detail you mentioned for this type of star was where Stan wanted to go? I was not trying to address your post/issues at all.

If you and others feel that my post has made this issue more ambiguous or is flat out incorrect, I can certainly delete my post.