Our own Donna Young has created an educational activity about variable stars on the HR Diagram. The activity is designed for formal K-16 educators and includes a teacher's guide, background material, student activities and answer keys.

However, the activity is also a great learning tool for those new to variable stars. It will introduce many of the most important types of variable stars and describe how they are related to other types. The genius of HR Diagrams is how they place everything in context of the grand scheme of things.

The activity is available here via the Chandra web site. 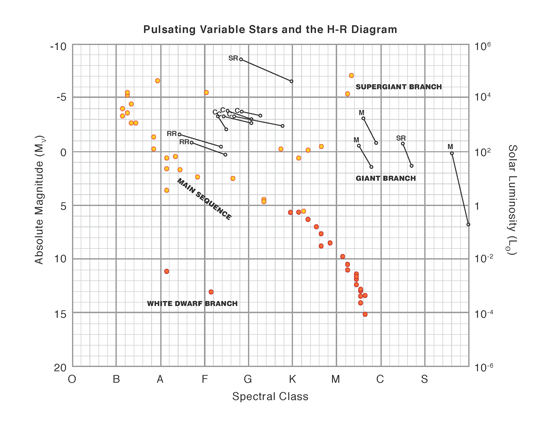 The activity is part of the Variable Star Astronomy (formerly Hands-On Astrophysics) curriculum developed by the AAVSO.  The traditional H-R diagram plotting activity shows the different branches of the diagram and the location of giants, supergiants and white dwarfs – all part of the evolutionary track involving main sequence stars. However, it presents a rather static view of stellar evolution.

The emphasis of this activity is the plotting of four types of intrinsic pulsating variable stars – Cepheids, RR Lyraes, Miras and Semiregulars. These variable stars can be thought of as representing transition stages for some stars as they evolve from the main sequence and “move” to other branches of the H-R diagram. These variable stars occupy regions on the H-R diagram known as instability strips, and plotting their variability as they transition from one evolutionary stage to another gives a better perspective of stellar evolution as a continuously changing process. This is further emphasized by plotting these pulsating variables at both maximum and minimum brightness to show how much they vary in brightness and temperature as they transition through the instability strips.