"I feel it is my duty to warn others...that they approach the oberserving of variable stars with the utmost caution. It is easy to become an addict, and as usual, the longer the indulgence is continued the more difficult it becomes to make a clean break and go back to a normal life."

Leslie Peltier was born on a small farm east of Delphos, Ohio on January 2, 1900. Growing up on a farm surrounded by forests and bordered by the Auglaize River, Leslie quickly acquired an appreciation and love of nature and the natural world.

His introduction to the night sky occurred at age five when his mother introduced him to the Pleiades on a crisp, clear, winter night. A book from a kindly librarian brought the rest of the universe into focus and Leslie's quest for knowledge of the night sky took off. As a teen Leslie earned $18 for a mail order telescope by picking 900 quarts of strawberries on his father's farm, earning two cents per quart. The 2-inch refractor arrived a few weeks later and 64 continuous years of night time observing began.

Leslie quickly became involved in the world of astronomy, joining the American Association of Variable Star Observers (AAVSO), an amateur astronomy group. A larger, 4-inch telescope was soon on loan from the AAVSO and found a mount on a pedestal in a cow pasture on the farm. A few years later Leslie's father decided the telescope needed a proper home and the first Peltier Observatory soon became a reality. By 1921 a 6-inch telescope soon was on loan from Princeton University and Leslie's career as a comet seeker began. Four years of sweeping the night sky for comets finally came to fruition on Friday, November 13, 1925. While sweeping the sky for comets Leslie came upon a fuzzy "something" in a cluster of stars. He focused in on this "something" and saw it had the trademark tail of a comet. Exhilarated, Leslie carefully plotted the location and telephoned the Delphos telegram station. Finding it closed and his only option the signal tower at the Pennsylvania Railroad station, Leslie raced toward Delphos in the dark on his bicycle. The telegram of his find to the Harvard College Observatory was answered a week later with the news that he had, indeed, discovered a new comet. 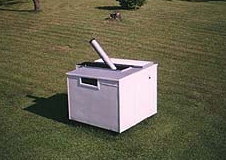 The Merry-Go Round Observatory

In November, 1933 Leslie married Dorothy Nihiser. After a long, adventurous trip to the American southwest, the Peltiers set up their household first in Leslie's uncle's house and later in a small house in Delphos. It was in 1937 that Leslie used his skill as a designer at the Delphos Bending Company to design and build his groundbreaking Merry-Go-Round observatory. For the first time an entire observatory rotated to follow the stars. This new observatory followed the Peltiers to their new home, Brookhaven, in 1948.

In 1959 Stanley Peltier, Leslie and Dottie's youngest son, was a student at Miami University in Oxford, Ohio. During renovation the university's observatory was scheduled to be razed. Stanley convinced the university that his now well known father would be able to utilize the observatory and its 12-inch refractor telescope. Within a few months the observatory arrived in Delphos, albeit in many, large pieces. With the help of friends and a crane rented from a construction crew building a local high school, the observatory was soon erected about 100 yards north of the Peltier home at Brookhaven. For the next 20 years the observatory would scour the night sky and host thousands of interested stargazers and school children.

Leslie Peltier died of a heart attack in 1980. His death was mourned by all across the astronomy world. His hometown of Delphos honored his life with a memorial sun dial on the grounds of the public library, where he served on the Board for more than 30 years.