My friendship with variable stars has been built mostly on books, papers, through the observations you our observers provide, and as an astronomer through training in college and graduate schools, and as a summer research assistant at Maria Mitchell Observatory where I photographically or photometrically, using setting circles, and push buttons, observed and studied variable stars. On the evening of April 27 - 28, 1984, I added another dimension to my acquaintance with variable stars and it is that experience I wish to share with you, here.

It was a beautiful evening (remember the date is much before the Internet, the AAVSO had no web site, no charts online, no chart CD, no quick look file, no light curve generator and almost everything was on paper) -- clear skies, mild spring temperatures, ideal observing conditions, on April 27 - 28. My husband, Mike who had been observing the planets, particularly Mars with his award winning telescope, the past few weeks, was going observing that night at the clubhouse of the Amateur Telescope Maker's of Boston at Haystack Observatory. He convinced me to go with him and do some observing. I gave in and decided to observe some variables. I took Mike's folder of charts. I could not find our Norton's Atlas, and I did not want to take The AAVSO Variable Star Atlas, as it was too heavy to carry. After all I was going to observe some very easy stars so I could do without it, (That was a wrong assumption from the start.) I took my small planisphere that shows the naked eye stars, our 20 X 80 binoculars and a tripod.

In the yard of our club house, I set up the binoculars, put our chart files on the hood of the car, and decided to enjoy the stars for a little while before "serious observing". I spent a good amount of time just sitting on a tree trunk and absorbing the beauty of the sky. I could identify the constellations to which lots of my variable "friends" belong to.

After a delightful time just enjoying the sky for about an hour, I decided to "seriously" acquaint myself with a few of my "variable friends". I thought I would try Z UMa, since I "know" it is easy to find, I suggest that to a beginner observer, so often. I could not find its finding chart in the file I had, so I gave up on Z UMa. As I checked the file of charts to decide what I could observe, I found the charts for R UMa, and decided to go after that. I searched for it in Ursa Major for maybe half an hour, all without any luck. By this time my neck was so twisted, and aching so bad, I thought there's got to be a more comfortable "friend" I could visit.

While rubbing my aching neck, I thought of the theme song...

His knees should bend and his neck should curl
His back should twist and his face should scowl.
One eye should squint and the other protrude
And this should be his customary attitude.

(Theme song for the aching amateur astronomical observer, selected from the Harvard Observatory "Pinafore"; being a parody on the Gilbert and Sullivan light opera: "H.M.S Pinafore," written 1879 by Winslow Upton of the Harvard College Observatory and presented December 31, 1929 by members of the Observatory Staff at a New Year's Eve party of the American Astronomical Society on the occasion of its annual meeting. -Amateur Telescope Making Advanced, 1949, Book two, page 521.)

Why not try R Leo, another easy star, favorite of Leslie Peltier's, the star that got him started in observing variables. Alas, I was disappointed to find out that I had no charts for it. While leafing through the charts I came across those of R LMi. That was a fairly easy long period variable, so why not find out what it was doing? I had not checked AAVSO Bulletin 46 and its supplement to figure out if it would be bright enough for me to observe with binoculars, but then R LMi is bright even at minimum for my 20 X 80 binoculars, I thought. I could almost see its light curve, in front of my eyes. I got excited thinking that one of the dots we would be plotting on the light curve of R LMi for April would be my very own, the product of this night's observing. 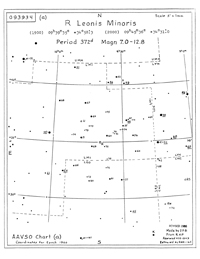 Anxiously I started, I located R LMi on the "a" scale chart, next with the chart in my hand, a small flashlight, stuck in my mouth as there was no other place for it, I started to star hop slowly toward R LMi, in the sky. You observers will remember there is a pair of bright stars to its east, in Ursa Major and a pair of bright stars of Lynx to its west. I found these pairs. I should be able to star hop right in to the field of R LMi, from alpha Lynx, I thought. At this time I checked the "b" chart to see what other faint stars are located in the field, and started to star hop. It was going pretty good and I was feeling quite satisfied with myself. Just then Mike called me to look at Mars and Saturn through his telescope. I decided to take a little break, to do just that. Saturn looked beautiful, I could see Cassini division, clearly. There were so many features visible on the surface of Mars! After thoroughly enjoying the planetary display, I went back to my observing of R LMi. Well, it had moved out the field of the binoculars, so I found alpha Lynx again, and started all over. Just when I had the field of R LMi in the eyepiece, a friend who was also observing there stopped by to chat. Thus, I took another short break, and got back to my observing with a self-made promise that I would not let myself be interrupted again, until I made the brightness estimate of R LMi. So back to the field R LMi I went. I found the comparison stars few bright ones and few faint ones, and I started to search for R LMi. I could not see it! I made sure I was in the right field, I checked the chart, and again, I was so anxious to find it my eyes stuck on the eyepiece firmly, I noticed the stars there slowly blurring out. I yelled at Mike that there is something wrong with the binoculars, I checked the lenses for dewing, there weren't but the eyepieces were, from the temperature of my eyes resting against them. Well, I gently rubbed the dew off and started again.

I star hopped from one star to the other until I was looking at right where LMi should be. I still could not see it. The faintest comparison star I could see was the 10.9 magnitude one to the north east of R LMi. Well, I recorded my time, my fainter than 10.9 estimate, the comparison stars I used and decided to stop as by now, it was past midnight, and I had to get up early the next morning. I had made my very own variable star observation and it took me three and a half hours!

As I was waiting for Mike to finish his observing I was reflecting on my observing experience. I was feeling refreshed, as if I had communicated with a friend up there, even though it took such a long time to make the "connection". Variable star observing certainly requires patience, and perseverance, and a lot of both, I found. Familiarity with the constellations is a big help. It also helps to plan and organize one's observing. It took me so long to make one estimate, partly because I had not been organized when I went observing. I did not bring the charts, and the AAVSO Variable Star Atlas. I had not checked the AAVSO Bulletin 47 Supplement. If I had done all that I probably would have ended up being acquainted with more "friends" than just R LMi. I did not do what I have been preaching to you, our observers, and thus it took me three and a half hours to make one estimate. I promised myself to do more observing, and next time I go out to observe I will be better organized and more prepared.

I also realized that making variable star observations requires a real concentration, it is best accomplished when working alone.

It was a beautiful night. I could almost "hear the silence", in reverence to the majestic universe. I felt revitalized. I decided that observing was one of the best cures for stress. 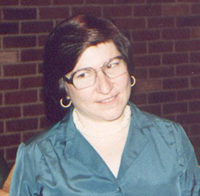 I wanted to shout out my one estimate of fainter than 10.9 to the world. More than ever I realized how wonderful it would be and how much I wanted to acknowledge each observer's contribution, if only time allowed. On the evening of April 27 - 28, 1984, there were no mosquitoes around but I was bitten by observing fever. You observer, next time you are out there trying to reach your variable star friend, do know that I greatly appreciate and know what you are going through; my silent thanks are going your way. And who knows, I may even be trying to communicate with the same friend up there on the same night as you.