So you've decided to get involved with SID Monitoring? That's great! But where do you begin? There are lots of options you will need to deal with and I am going to go over some of those options here. I'm going to cover the basics of what you need to monitor SID's, the basic process of making measurements and reducing your data and generating a report for submission to the AAVSO SID Program. It's not necessary that you submit data to the AAVSO. Some observers just pursue this for fun and to have a first hand sense of what activity is taking place on the sun at any given moment. It's a great feeling to be able to glance over and know that the earth's environment just got blasted from a stream of X-rays that are the result of a powerful solar flare that, just eight minutes ago, erupted on the surface of the sun. All this and a cloudy day too. Now that's solar observing!!

The Hardware
The setup for monitoring for solar flare activity is made up of five basic building blocks. 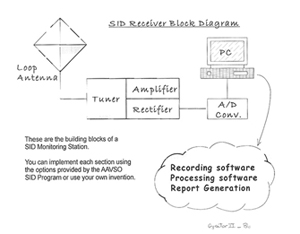 These are depicted in the block diagram of a typical setup. Most SID observers in the AAVSO Program use the hardware options promoted by past members Art Stokes, and Cap Hossfield, and Joseph Lawrence. There are other options however and you by no means have to stick to the recommendation made here. What is referenced here is done so for your convenience. Feel free to experiment.

I am not going to include links for each topic covered here. You can get to the details of most of the hardware options by going to the SID Equipment section of the AAVSO web site.

The ANTENNA most commonly used for SID monitoring is a small Loop Antenna that consists of many turns of small gauge wire wound on a square the size of a dinner plate. The antenna, acting as an inductor, is tuned with a capacitor sufficient to cause the loop to resonate at the frequency of the station being monitored.

What Station?? Well that's up to you. It will be a VLF station in the range of 15-30 Khz that is appropriately located for where you live and based on the power output of that station. We here in the NE United States have NAA in Cutler, Maine. It runs at 24 Khz with an output power level of 1000 kW. Unfortunately not all of you will have such a beast in your back yards and you may have to play around to get the tuning just right in order to receive whatever station you intend to monitor. You need the antenna to tune sharply at the desired frequency. In other words it needs a High-Q. Cap Hossfield designed a Large Loop receiver system where the large loop, having a higher Q than the smaller but more compact loop, was able to tune quite sharply indeed.

The TUNER, much like the antenna, must be tuned to the appropriate frequency based on which station you are monitoring.

The AMPLIFIER is used to boost the strength of the signal so that it can be converted to a DC signal and recorded.

The tuner and amplifier are, in reality, a part of a single piece of hardware. That is the receiver. The receiver does most of the work. It isolates the signal (tuning), amplifies it and converts the signal to a DC signal that is representative of the strength of the signal. This is the ultimate goal of course since when a solar flare induces a strengthening of the ionosphere, the signal strength will increase. This is your SID event.

The most common receiver in use in the SID Program is the Gyrator II, which was designed by Art Stokes. This ingenious receiver eliminates an inductor in the input tuning circuit by using a couple of Op-Amps in what is known as a Gyrator configuration. The net effect is to simulate the role of the standard inductor. This design is based on the original Inductor based receivers used by past SID Observers and is a follow on to the Gyrator I. There is also what is known as a minimal Gyrator circuit which was an attempt to make the circuit as simplistic as possible and hence cheaper. I would strongly recommend the Gyrator II. You can purchase PC Boards from Far Circuits.

The A/D CONVERTER most suitable for monitoring is a simple A/D converter based on a MAX186 A/D Converter chip. It was originally designed by a man named Mike Gray and presented in Amateur Radio Today (August 1996) and promoted by past SID Analyst Joseph Lawrence. In fact Jospeph wrote some software, which was then upgraded by an observer named Andy Clerkin, to control this circuit via a PC Serial port. Construction details are provided on the AAVSO web site for building this A/D Converter but you can also purchase the same circuit from a Radio Astronomy site http://www.radiosky.com/max186purchase.html. There are other means to acquire the signal and this is probably where most observers' setups begin to deviate. Some people use a low cost commercial A/D Converter made by DATAQ Instruments. The DI-194 is a simple device and comes with software but for best results you should write your own software. Another commercial package used is called RadioSkyPipe obtained from http://www.radiosky.com/skypipeishere.html which relies on your sound card to input the data. Yet another option is a RadioShack DMM which has a serial interface which allows you to connect it to your PC. This might be an expensive route to take but certainly a possibility.

The last piece of hardware is of course the RECORDER. The output from your A/D converter has to be processed and recorded. Although observers used to use old Rustrak strip chart recorders, nowadays this is most often done under computer control. The computer is controlling the A/D circuit only. It has nothing to do with the operation of the receiver. Most of the observers use a standard PC. In most cases a very old slow one that has been slated for the junk pile. This is all you need. It doesn't do much when operating as a dedicated SID monitoring station. It keeps time and logs the data once every 15 seconds or so. So keep it simple and keep your eyes out for those old 66 MHz screamers.

Software
You are going to need software to accomplish two tasks. One is to collect the daily data and the other to generate the monthly report. The overriding issue with both programs is data format. Working backwards, the reporting software MUST produce a report file according to strict formatting rules as outlined on this website. The inputs to this software are the daily data files that your data recording software produces. Obviously the data format of the recording software must match the input format of the reporting software. Confused? Well don't be. It's really quite simple, only two formats to worry about.

Data Collection
If you use a MAX186 Based A/D interface you can use a program the AAVSO provides called Logger5. This simple DOS based program records the input voltage and time at an interval that you set. (Most often a sample interval of 15 seconds.) The file produced is a text based file. If you set your computer clock appropriately you will log UT time along with the data rather than local time. The program operates autonomously starting and stopping each day according to the times you set. The daily files are then available for data reduction. This is the logging method and software the AAVSO SID supports.

Some people are using a data logging device from DATQ Instruments called the DI-194. You can use the software provided to log the data but must take the format into consideration for processing. Or you might write your own logging software based on this relatively inexpensive device. Search the web for UltimaSerial, an Active-X software driver package designed for this device. Using this you can actually write an excel based program to log data or perhaps a more involved, and more robust, C program.

Some people are using software found on the web called RadioSkypipe. See the hardware section above for a web address. This also requires consideration of data format.

Lastly, do not hesitate to come up with your own methods to record your data. It can be a paper stripchart; There are options for reducing data in this form. It can be your own software running the MAX186 based A/D interface. Or your own software to drive the DATAQ interface. Or it can be an interface of your own choosing/design and your own custom software. Feel free to make whatever you come up with available to others especially if you become part of the AAVSO SID group. A member of this group has created a nice program for SID Monitoring called SIDLogger. It is based on a National Instruments LABPC-1200 Data Acquisition card. Now most of you might not have the option to use one of these but if you do have access to one, well then there is software for you. The AAVSO does not officially support it but it is indeed available by request.

Report Generation
If you used the Logger5 program or any home brew program that produces data files that have the same format and filename convention you can use a really nice program to perform data reduction. The program is called SIDGraph and was written by an observer in Italy. This program is available as Shareware from the site listed under the SID Software section the AAVSO web site. Using this program makes data reduction and report generation a snap. You load each daily file one at a time which is displayed on screen so you can see the individual SID events. You just click on the start, peak and end points of any given event and the time of the event is automatically retrieved and stored. The resulting data file listing all the events you have observed during the month has the correct AAVSO SID Report format and can just be emailed to the SID Analyst at the end of each month. This is the recommended method of automated report generation.

If your data collection method does not produce a file format suitable for SIDGraph but you can determine the start/peak/end times of the SID events from a visual analysis then you can use a program called SIDEntry to manually enter the event times. This program works like a spreadsheet program and allows you to write out the results to a file that has the correct AAVSO SID Report format and can just be emailed to the SID Analyst at the end of each month. This is the recommended method of manual report generation.

Some observers just tabulate their results and enter them into a text file using some sort of template to assure that the data fields are located in the correct columns. This is a bit cumbersome but does work in that the end result is correctly formatted.

If you have some programming ability then of course there is no limit to what you do or how you do it. You may want to write your own custom software. This is fine as long as the format adheres to the required guidelines. I know this has been overstated but it is important. The final analysis of many reports sent in by all the observers each month is processed by a data analysis program. This of course relies on a certain format and naming convention. In order to have your data processed by the AAVSO SID section it must be able to be processed by this software and hence the importance of formatting.