AAVSO Observer Code
MQE
Affiliation
American Association of Variable Star Observers (AAVSO)
Full Name
Ken Mogul
Location
Naples, FL, US
Background/Interesting Fact
I'm Ken Mogul. I am running for AAVSO Council in the Fall of 2012. I am 58 and I retired 6 years ago from the airline business, due to a disability I picked up after a bicycle accident. I am in the process of moving to Naples, FL from the Atlanta area, to be near my elderly Dad, who may need my help from time to time as the years go by. One of the reasons I am looking forward to Naples is because, as opposed to Atlanta, it is a spot to which some of the friends I have made through AAVSO might actually consider coming to visit me. I have two "children"--both rescue dogs, a mix named Muttley and a deaf cocker named Beau. Muttley is the youngest dog to have ever discovered a supernova, but he hasn't reported it because he is really angry that AAVSO continues its policy of discrimination towards membership for dogs. But he is a strictly visual observer and supports the visual observing program strongly, even though because of my physical limitations all of my observing has to be CCD (using remotely controlled equipment over the internet). But I really admire and am envious of the skills sets visual observers have brought to AAVSO from it inception, and am also a bit envious that they get to bond with the heavens, in a way which I don't get to experience doing my research in the very virtual, computer world.


After my accident I started searching for a passion which would keep me in shape intellectually, while at the same time allowing me to give something back for the amazing life I have had to date. Astronomy, astrophysics, cosmology and even particle physics has always been a keen interest of mine as a hobby, but it wasn't until I happened to listen to a podcast called "Astronomycast" that I realized that variable star observing was a way in which anyone at all could make meaningful contributions to science.
I contacted AAVSO and when I described my situation, it became obvious that getting my own equipment was not practical. But I was pointed in the direction of using online "telescope farm" services such as i telescope, formally known as GRAS. I was partnered with a mentor, and I started down a wonderful road of learning, making new friends, and contributing. I soon became interested in doing volunteer work for AAVSO in many areas, became an ardent Citizen Science proponent and became interested in getting the word out to others--that this is a wonderful hobby through which adults can contribute meaningfully to science, and children can get hooked on math and science in a fun way. My experiences have been noted in a Sky and Telescope article and on Slacker Astronomy.

I have sponsored young people and adults who cannot afford it into AAVSO. I have donated funds which have purchased (fill in with specifics). I developed fields of view for "pay per view" astronomers to use which have multiple variables of scientific interest in them...in order that such observers can get the most bang for their buck. I am a quality control advocate for AAVSOnet, which means that I inspect raw images and report problems to the hardware operator. I have spent a lot of time digitizing historical data, developed new ways to data mine images, and mentored new members. I am currently partnered with Dr. Doug Welch on a multi year AAVSOnet project which will answer unresolved scientific questions about Type 2 Cepheids. This work keeps me busy for hours a day, and has been a great test case for the amazing effectiveness of tools which have been donated to AAVSO, such as VPHOT and VSTAR, through the hundreds of hours of "sweat equity" generous volunteers have poured into these projects. I eventually wrote and produced the VPHOT tutorial, and was proud to help fund its initial startup bandwidth needs.


I am particularly proud of this work because it goes right to the heart of one of AAVSO's core missions, which is the collaboration between amateurs and professionals. I am also keen to bring new young people into the organization, particularly through the visual experience, in order to develop a membership foundation base for the future which will ensure that the contributions of the past will live on. As a Wharton MBA I have always been interested in lending the organization my managerial, financial and fund raising expertise whenever needed, and I think serving on council will be good way for me to increase my contributions in these areas. I firmly believe that the organization needs both visual and CCD based talent and I want to help to develop programs through which the work of visual and CCD observers can be better coordinated, and can better compliment each other. I want the organization to have an ongoing equal balance of amateur and professional representation in its governing body. I want AAVSOnet to grow into something everyone in the organization can use and be proud of, and I have many ideas on that subject. As a retiree I have the time and energy to make AAVSO, really almost my full time vocation and I have the desire and ability to listen to what is important to individual members and to respond to their needs. After completing my MBA I went on to do a PhD at the University of Pennsylvania, but decided very late in the process to not pursue a career in research and academia. Nevertheless having spent three years actually doing everything involved with earning a PhD, I have a unique perspective on how the professionals in the organization think and operate, and have a natural ability to communicate and think from a professional's point of view. AAVSO is a truly international organization which is one of the things I like about it. Having lived in France for a number of years in my youth, I became very fluent in French. In my airline career my fluency in not only another language but another culture was invaluable, and I want to apply that expertise to AAVSO.

And as a retired airline employee with access to "Buddy Passes", don't forget my campaign for council slogan..."Vote for me, fly free!!!!" 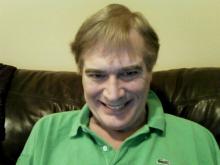