V4334 SGR is well known as "Sakurai's Object". It was discovered as a variable on February 20, 1996 by Yukio Sakurai of Japan while he was looking for comets. (Imagine the numbers of variables discovered this way!) At the time, it was a new 12th magnitude star thought to be a novae. But pretty soon it was realized things were not quite so simple.

Sakurai's Object is in fact a very old star. It is so old that it is very near the last phase of its life: the white dwarf stage. But Sakurai's Object is not quietly fading away, as normal stars do. Instead, it is giving in to fits and starts, trying to regain its stature as a giant.

As a red giant nears the end of its life it takes turns burning hydrogen into helium in the core, then when the helium has built up a critical mass, it burns into carbon and oxygen. (For details consult the May, 2002 Variable Star of the Month article on R Hydrae). When this happens, the outer layers of the star expands and shells of matter are thrown off. After a few cycles of this, all that is left is the carbon-oxygen remnant in the core. This core is a white dwarf, surrounded by a nebula created by all the shells recently puffed off. It makes for very photogenic HST pictures, but is more important than that. Much of the elements that makes up our world is created during this time and then distributed by those shells. This phase is called a "Helium Flash" and can occur multiple times.

Sakurai's Object is not content to slowly evolve into a white dwarf. At the last minute, it found enough helium to produce one final helium shell flash. This is what occured in 1996. What makes this object interesting is that we get to watch a process unfold that takes years and decades, not millenia! We can actually see what is going on at the surface of the star as it reaches a key point in evolution. With modern technology, high resolution spectra and imaging has given us a wealth of data not available before. Only one other star has undergone a similar episode, V605 Aquilae, discovered in 1919 when telescopes and equipment were not advanced enough to measure what was happening with the object. More recently, FG Sge and V838 Mon have been suggested as possible analogues for Sakurai's objects (IAUC 7886 and Duerbeck et al 2001).

Now Is the Time

Each time a helium flash occurs, it "dredges up" matter created in the core of the star. This gives astronomers a chance to indirectly see inside the star and test modern models of interior stellar astrophysics. Additionally, we can see the evolution of a photosphere and the birth of a new nebula. All of these are areas of astronomical research where lots of questions remain to be answered. 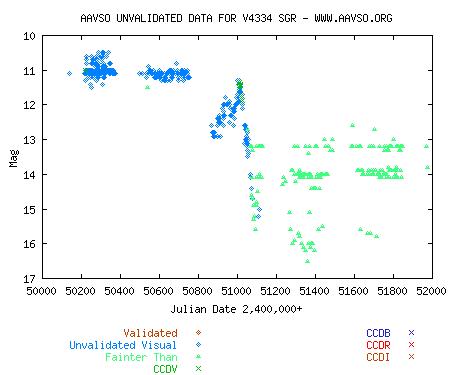 How To Observe & What To Expect

Right now Sakurai's Object is pretty faint. In fact, it is so faint that we don't have any positive observations of the object in 4 years. The last observation was made by Steve O'Connor on October 25, 1998. The star is now surrounded by a dusty shell so is very dim in optical light. However, CCD observers with large apertures and I filters may want to try and image the object because it is much brighter in infrared as the dust reradiates the optical light it absorbs. Recent studies (IAUC 7879) suggest that it is heating up rapidly. Future activity of this star is unknown so long term monitoring is very important. For all observers, try to make an estimate of this star once a month just to keep an eye on it. CCD users try to monitor in V and I. If anything does happen, it will be a big deal and you could be the next amateur to "re"discover it.

Be careful when observing it faint with a CCD. The field is very crowded and the object does not even show up on a DSS image (taken before the 1996 outburst). If you have any questions about identifying it please consult the AAVSO.

So please remember to keep an eye on this star, once a month or so!