TX Psc is a very bright, nearby star which is well studied and of interest to professional astronomers. One observer from the BAA-VSS logged a few observations back in 1887 after which the star seemed to have been forgotten about until 1947 when regular visual observations picked up again. There are currently 13,515 observations in the AID, 91.6% of which are visual. The GCVS list TX PSC as a Lb-type variable, meaning that it is a late spectral-type giant with an undefined period. There is evidence that this star is misclassified and does indeed have a distinct period. TX PSC is of interest to astronomers due to its current evolutionary state and the ability to study the unique structure of its circumstellar shell due to the star’s relative closeness to Earth.

TX PSC (C7,2 (N0), TC) is a carbon-rich AGB star with a complex CO line profile. At low to intermediate-mass end of the final stages of stellar evolution, sun-like stars exhibit a rapid increase in size and luminosity which leads to a pulsating stellar atmosphere and a strong, molecule rich stellar wind (Habing 1996).  Parallax measurements from the Hippocras satellite place the distance from Earth at about 275 parsecs, making TX PSC one of the nearest of these type of stars. Brunner et al. (2018) utilized ALMA to study TX PCS’s dust shell and found a thin, irregular, and elliptical detached molecular shell which coincides with dust emission. These shells are thought to be linked to thermal pulses which last a few hundred years and significantly increase the star’s mass loss rate for short periods of time.

Mathews et al. (2013) conducted a H1 (21 cm) survey of 8 AGB stars with the VLA. TX PSC exhibited a moderately high space velocity (> 56 km/s) and a gaseous wake. The total mass loss is approximately 3.1 x 10-7 solar masses/year, which is consistent with the other AGBs studied; however, Hron et. al. (2015) measured the shell in far-IR and found it to be 17” across and calculated that the mass loss rate must be higher in order to produce a dust shell this large. Most AGBs exhibit a lower velocity stellar wind (~10 km/s) as they cool, which is the dominate means by which chemically enriched material is recycled back into the galaxy. Jorissen et al. (2018) studied this process of how the stellar winds of AGB stars interact with the interstellar medium (ISM) by imaging stars at 70 micrometers and 160 micrometers with the PACS instrument aboard the Herschel Satellite. Jorissen also found a near circular dust ring with axisymmetric symmetry around TX PSC.  Of the 78 AGB stars measured in this study, only TX PSC and X Her exhibited this type of structure. Jorissen argues that the cause of this symmetry is due to the shell’s interaction with the ISM and the high relative velocity of this star’s stellar wind. Raskin et al (2010) found this wind velocity regularly varies by as much as 8 to 15 km/s in radial velocity over periods of 450 days. Cruzabelbes (2013) studied 16 late-type stars and TX PSC was the only one exhibiting this behavior.

Most studies agree that TX PSC has recently become a carbon-star, meaning the with a carbon to oxygen ratio (C/O) greater than 1. Cruzalebes (2013) measured C/O as low as 1.02. Klotz (2018) places the upper limit for C/O at 1.1 with the best solution at a ratio of 1.05. Most papers cite a value of 1.05 to 1.07 and a Teff around 3100K, which is on the upper range for this type of star. Although determining the evolutionary stage can be tough due to the complex atmospheres of carbon-rich AGBs, the interferometry and spectroscopy of TX PSC are both in agreement, which according to Klotz (2018) further confirms the star’s place in the H-R diagram.

TX PSC was the first evolved star in which technetium was detected (Merrill 1952).  Tc is an s-process element with no stable isotopes and a half-life of 2.13x105 years. Tc-99 can only be made in AGB branch stars' thermal pulses and should be detectable for 1 to 1.5 x106 years after the pulse (Cruzabels 2013). Significant amounts of Florine is also present in TX PSC, which agrees with recent nucleosynthesis models of low mass AGB stars with near solar metallicity (Abia et al. 2018). Harris et al. (2018) also found signs of HCN, which is an important source of opacity in carbon stars.

VSX list the star’s magnitude range in Johnson V as 4.79 to 5.2. You can see from the light curve (from 1945 to today) that photometric results in V fall into this range, however, the visual estimates have a much greater range. The fact that visual estimates tend to be dimmer than the Johnson V measurements for this star is due to its orange-red nature. Wikipedia list the B-V color index as +2.6 (this star is not in APASS data), although many measurements in VStar had this closer to 2.7 to 2.8. I queried the 167,477 confirmed variables in VSX with APASS B-V data available for stars with APASS B-V ≥2.6 and got 1,726 returns, so only about 1% of variables are redder. Here is a great forum post regarding visually observing very red stars.

I generally like to look at visual data for long term trend, but I found it difficult with the star due to wide scatter of the data. The red color is probably part of this, but not the only reason. This star is located in a very sparse star field. With binoculars and a 5 degree FOV, you’ll have 3 comps available and each is near the edge of your field of view in which to make estimates from. These three comp stars are nowhere near as red as TX PSC, which will lead to more inaccuracies.

The first real intense photometry was carried out by AAVSO member Richard Wasatonic (WSI) who observed the star from 1990 to 1996 as part of the AAVSO’s Small Amplitude Red Variable (SARV) program and published his results in the JAAVSO. He made PEP observations with a Schott V filter and transformed them to Johnson V. Based on his 1990-1995 data, he suspected that this star may be misclassified and could be a SRa (variables with amplitudes <2.5 and persistent periodicity) or a SRb (variables with poorly expressed periodicity) with a period of 220 days. However, he found the star to exhibit unusual behavior in 1996 with the star’s amplitude decreasing to almost zero which he found reminiscent of a Z-Cam like standstill (Wasatonic 1997).  From Wasatonic’s data published in the JAAVSO: 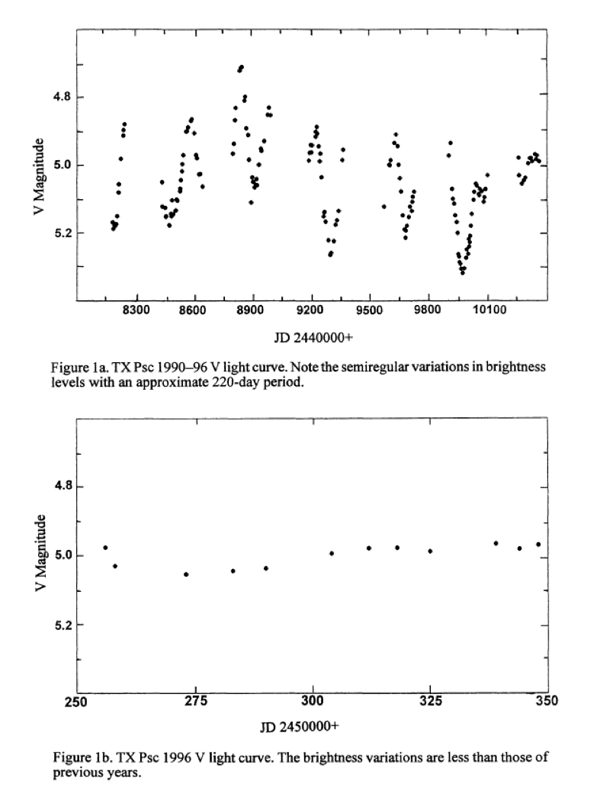 However, when I examined Johnson V data from other observers in VStar in 1996, I did see signs of variability, although less than the norm. According to VSX, the amplitude of TX PSC is 0.4 magnitudes in V. When I look at 1996, I found the star had a minimum of 5.06 and a max of 4.9 for an amplitude of 0.16 in V and a period similar to Wasatonic’s 220 days.

Running a DCFT scan on the all visual data from 1947 to today in VStar returned a very strong hit for a 853.03 day period and a reasonably strong hit for a 256.44 days. Running the same scan on the Johnson V data returned equally strong hits for a 257.65 day period and a 870 day period. The visual data periods did not produce reasonable phase plots. Neither Wasatonic’s 220 day period nor the 224 days listed in the GCVS produced a workable phase plot. The 870.86 day and 257.65 day periods gave barely sufficient phase plots with a lot of scatter. The 870 day period looks like it may be an alias frequency. The period may not be stable and changing over time which would explain why there is so much scatter in these phase plots and why Wasatonic found a different period when looking at just the early 90s. The blue trend line below is a binned (0.1 cycle) mean.

TX PSC was also covered by ASAS from 2000 to 2009. The data was consistent with the AAVSO data.

In conclusion, TX PSC is an interesting and astronomically relevant star worthy of further investigation. Adding observations in additional filters, such as R and I should be especially useful. I personally do not believe this star is a good visual target, and it pains me to say so, due to the lack of suitable comps, deep red color, and low amplitude. I believe this star would be an excellent target for the Bright Star Monitoring program. The BSM should be handle the extremely bright R and I magnitudes and I will submit a proposal for it to be monitored.