AAVSO Observer Code
WWJ
Affiliation
None
Full Name
Bill Wilson
Location
Grange Over Sands, Cumbria, GB
Background/Interesting Fact
Optometrist by profession – now retired. I've been an “Annual Member” of AAVSO since 28th October 1999. Though my interest dates from childhood, I became an active observer in 1969, being inspired by Nigel Calder's “The Violent Universe” - shown on UK television. This phase terminated in 1975. A seventeen year hiatus followed when the 8” Newtonian stood in mothballs; being finally sold in 1991.

The following year, having relocated to a rural site, I realised we had a decent night sky and regretted parting with my scope! I've progressively tooled up ever since, and concentrated on variables to an ever increasing degree during the nineties.

Still take a little time off to enjoy the deep sky, but, in the main, like to feel I'm participating in the ongoing enterprise of The Association. In fact; if I don't come away from an observing session with a handfull of estimates...I consider I've been skiving, or, perhaps missing out on some important development in my shortlist of charges! 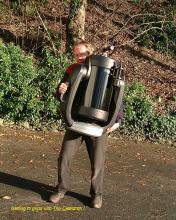