APASS is described in Henden, et al. (2009, 2010, 2011) and Smith et al. (2010), as well as on the AAVSO web site (http://www.aavso.org/apass).  Basically, it is a survey using twin astrographs with CCD cameras that will cover the entire sky in five bandpasses: Johnson B and V, along with Sloan g’,r’,i’.  This system underwent commissioning tests in 2009, and began survey operation at Dark Ridge Observatory (DRO, near Weed, NM) on December 21, 2009.  As common in the southwestern U.S., APASS was shut down starting about mid-June due to the monsoonal clouds.  Therefore, the system has been operated for about 6 months.

The system acquired data on 52 photometric or partially photometric nights during this 180-day period.  This is slightly lower than normal, due to a strong el Nino weather pattern, some equipment problems, and some nights when operations were not possible due to the absence of human supervision.  The 52 nights were a mix of very good nights and those where clouds impacted portions of the night. This first data release includes 3.9 million stars observed at least twice in approximately 6000 square degrees, primarily located north of +40 declination along with an equatorial stripe. We are still processing the north polar field, and that will be included in the second release.

Concepts of operation and data processing

The astrographs use carbon fiber tubes, and since we want to be somewhat out of focus anyway, focusing through the night is not performed.  Flats are taken through the day for “dome flats” and at evening twilight for “twilight flats.”  Typically dome flats are used.  The flatfielding system for DR1 used two layers of cotton cloth over the front of the telescope tubes as a diffuser, and two projection lamps.  A picture of the flatfielding system is given below. 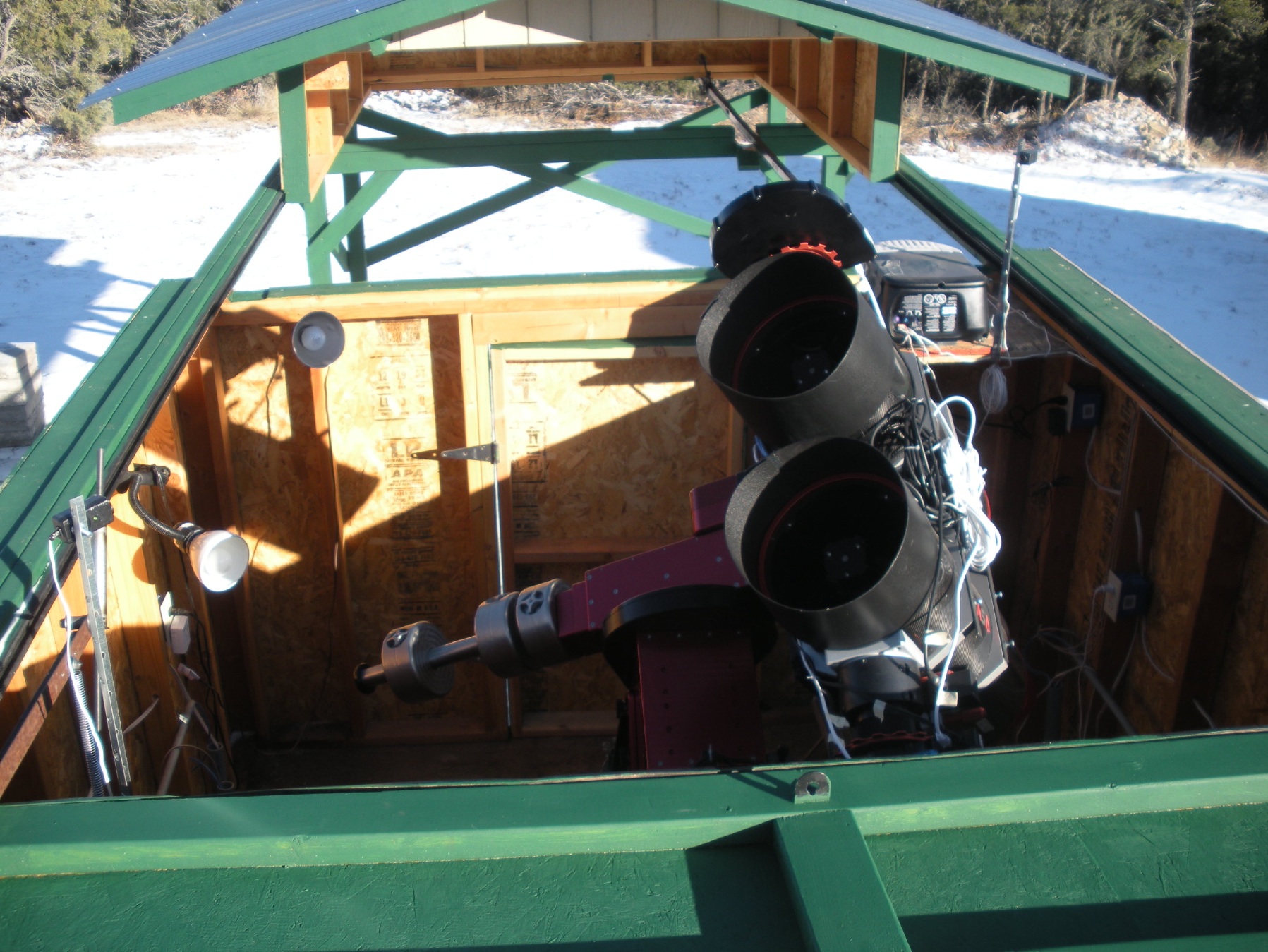 MaximDL is used to control the cameras and filter wheels; ACP handles the scheduling.  A single Linux computer is used, running two VMs, each with Windows XP.  One VM handles camera 1 and the telescope mount; the other VM handles camera 2.  A semaphore file synchronizes the exposures.  A file of possible fields to observe is given to ACP; as fields are completed, they are removed from the queue and new ones added.  The initial northern hemisphere program started at +90 dec and worked towards the equator, ending at +40 dec.

Each frame is dark subtracted and flatfielded.  Daophot routines in a separate Fortran program then find all stars, determine their centroids, and do aperture photometry to give a set of starlists for the night.  Each starlist is then matched against Tycho2 and UCAC3 reference stars to determine the standard 6 parameters of the linear solution.

Two additional steps are required before completion of processing.  The Wynne correctors add 3rd order optical aberrations, so a program written by Stephen Levine fits the linear solution residuals with cubic polynomials to fully correct the astrometry.  The OTAs add considerable scattered light (a problem that we are still working on), so a program matches SDSS stars vs. APASS stars, finds a matrix of residual magnitudes as a function of position on a CCD chip, and corrects the input magnitude.  The algorithms are described in detail in Henden, et al. (2011).

According to ASA, the Wynne corrector works effectively over a 50mm image circle.  We find the corrector starts vignetting at about 47mm and drops quickly about 49mm.  The U16m CCD has a 52mm diagonal.  This means that the corners are highly vignetted and not well corrected.  We expect to remove this problem by giving image corners low weight in the final solution.

Quality of the data

Shown below is the typical photometric error vs. magnitude for these exposures.  As can be seen, the errors increase as you go brighter than 10th magnitude, as stars begin to saturate.  Anti-blooming gate detectors bleed off some of the accumulated charge, so there is no conservation of charge as the stars near saturation.  Likewise, the pixels have limited dynamic range, so stars fainter than 14th magnitude start showing increased error, degrading to about 0.1mag at V=16.5.  The limiting magnitude on the current extraction is somewhere between 16th and 17th magnitude. 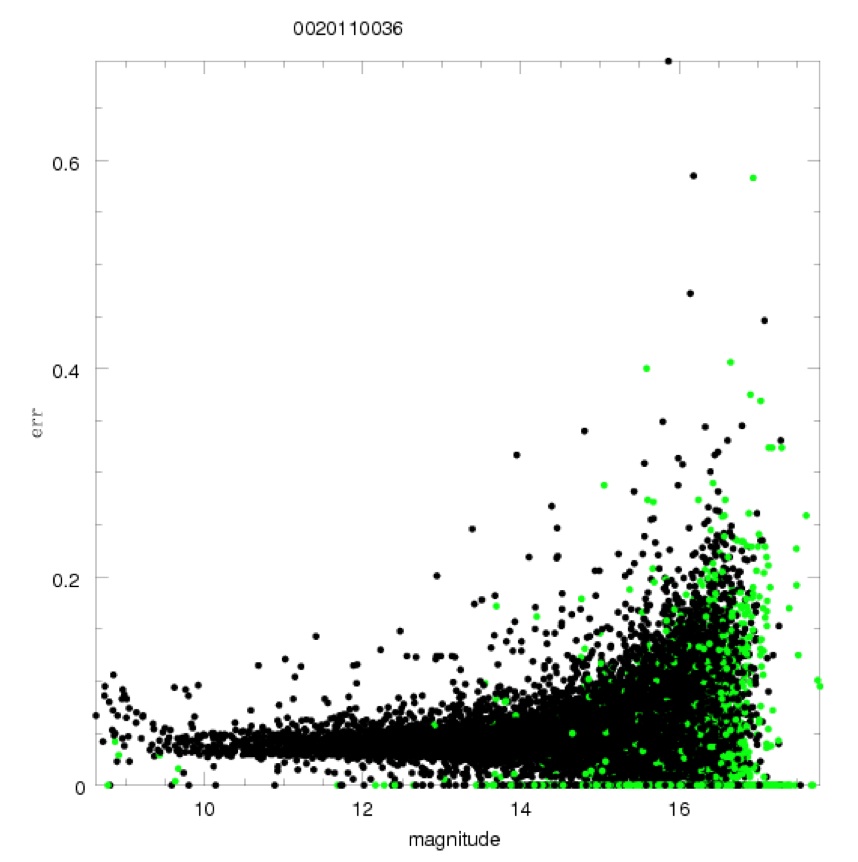 Comparing against Landolt and SDSS standards, the APASS system closely matches each standard as shown below for the 390 matches fainter than V=8.5.  There are 10 isolated large discrepancies, mostly caused by blending in the APASS images, that are removed from this plot.  Note the obvious saturation at the bright end, where APASS is fainter than Landolt.  The mean error is about 0.03mag. 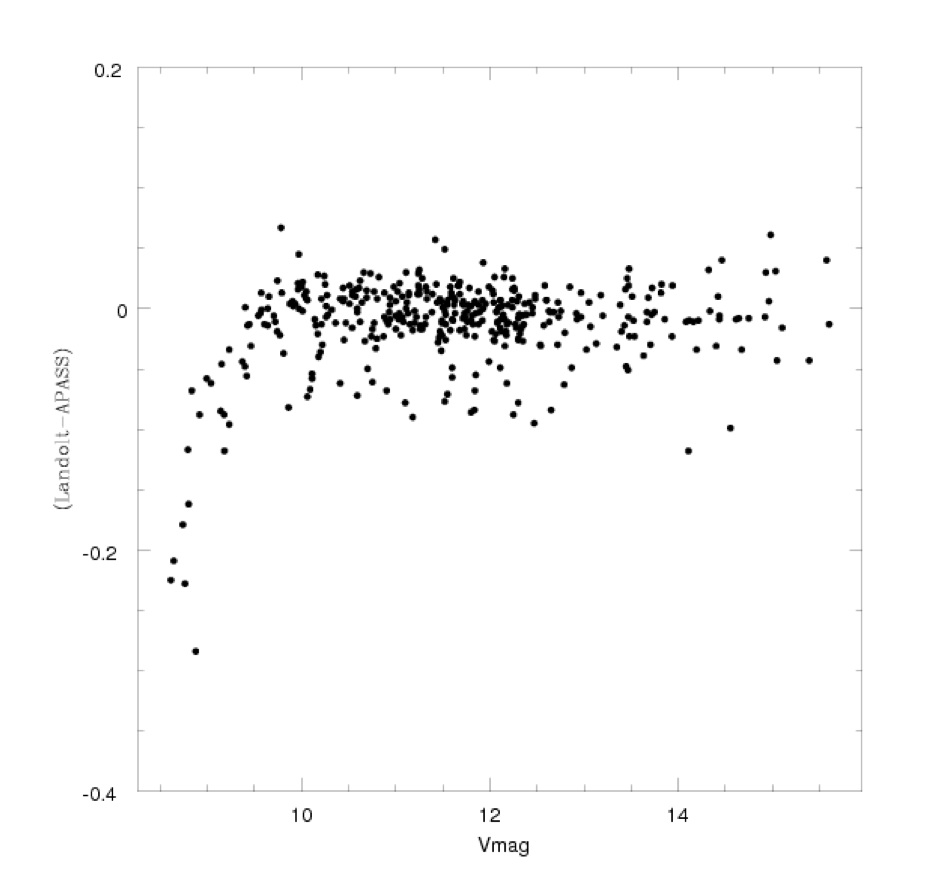 Finally, comparison of APASS astrometry with UCAC3 as a function of magnitude is shown below.  The typical error is less than an arcsec until V=15 or so.  We expect the final astrometry to be about a factor of two better than shown in this plot. 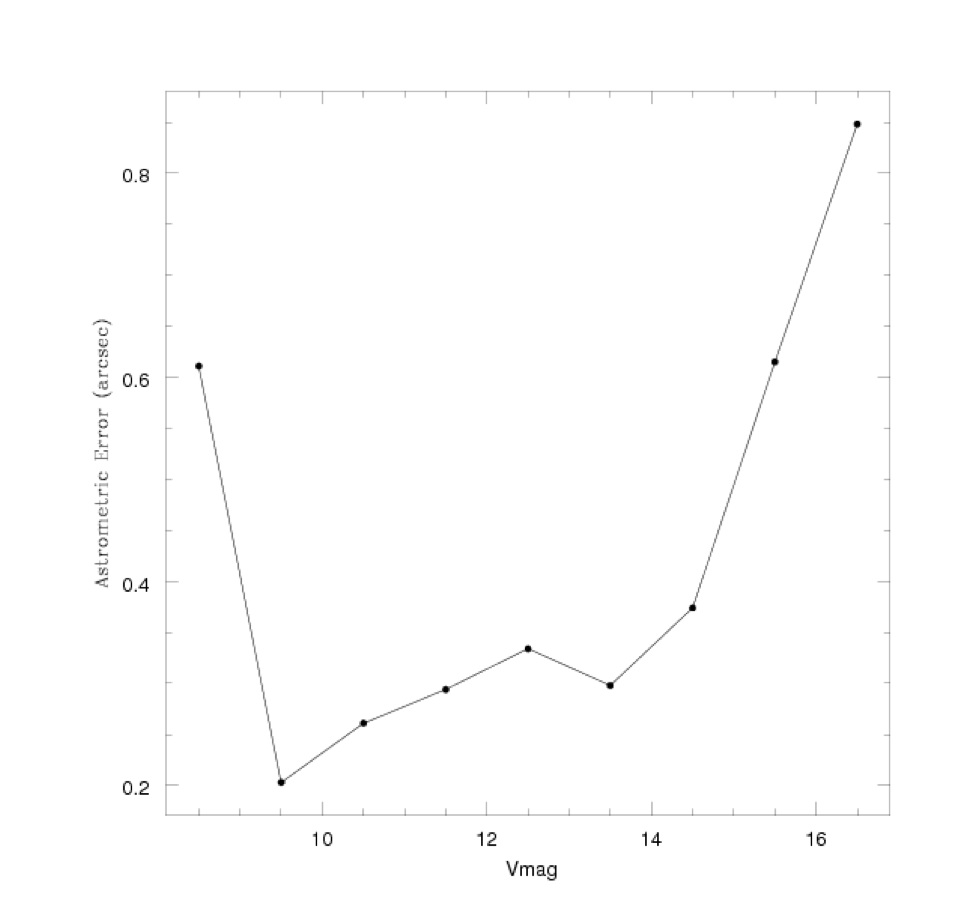 A visualization tool, Seqplot, is available to display the APASS fields, enable cursor selection of objects, and both display the photometry for the selected object as well as writing those results to a text file.  Seqplot is written in Java, downloadable from http://www.aavso.org/seqplot, and contains over a million calibrated stars from other sources as well.  Note: to use Seqplot, you need to register for the AAVSO web site.  This is free and just involves selecting a username and password.

For larger queries, we provide a simple gui to access the MySQL database.  This form can be found at http://www.aavso.org/apass, and includes the typical range limits like coordinates and magnitudes, and produces files in several different formats.  We restrict the size of the search radius per query to 5 degrees in order to use our bandwidth most efficiently.

If you use APASS for your research, we request the following acknowledgement.  This makes it easier for us to track APASS usage:

This research has made use of the APASS database, located at the AAVSO web site. Funding for APASS has been provided by the Robert Martin Ayers Sciences Fund.

APASS is a moving target.  Each object will have a minimum of four photometric observations by the end of the survey, while DR1 has typically only two observations.  Therefore, the current photometry will change as more nights are added to the solutions, and other nights are dropped as their calibration is found to be inferior.  This is different than most astrometric catalogs, where only one or two observations under non-photometric conditions are needed, and once the reductions are released, nothing changes unless the basic algorithm changes.  We felt it was better to give the community good data now, rather than waiting for the better data a year or two later. You should always identify from which data release you obtained your photometry.

Likewise, we are not providing star IDs until the final product.  We expect to use a better source extraction algorithm in later processing, which will change the astrometry and split some blended objects.  Identify stars by their RA and DEC.

Blending will be a problem in APASS.  The pixel scale is 2.57arcsec/pixel, and we purposely defocus the telescopes so that star fwhm is 1.5-2.0 pixels.  In addition, we are using aperture photometry in these early releases, with a circular aperture of 17 arcsecond diameter.  The astrometry in crowded fields will place centroids between stars, and the digital aperture will include other stars besides the target.  We highly recommend looking at a digital image, such as the DSS, and only using APASS stars that are isolated.

We are not happy with the current i’ results.  While still good, they do not have the same quality as the other four filters.  We are investigating different reduction techniques to improve this situation.

The southern APASS system is being installed at CTIO in early November, 2010.  It will take a small amount of time to commission, and then we should be acquiring data from both northern and southern sites.  We expect the next data release to occur near the end of 2010.  Subsequent data releases will occur irregularly, depending on the weather and the state of the processing, but we are expecting to make a new release about every quarter.  The entire sky is scheduled to be finished by the end of 2011.  At that time, we will do a final global reduction, improving the astrometry and photometry with knowledge of adjacent fields.  This will result in a final APASS catalog during 2012.

APASS is funded through grants from the Robert Martin Ayers Sciences Fund.  In addition, we gratefully acknowledge Software Bisque for the loan of a Paramount ME; Dan Reichart for the use of a PROMPT dome and Paramount ME at CTIO; Astro Systeme Austria for a generous discount on their astrographs; Apogee CCD for extended discussions and discount regarding their U16m cameras; Bob Denny for providing a site license for ACP; John Gross for discussions about ACP, MaximDL and scheduling algorithms; Don Goldman for discounting his filters; Patrick Wils for examining the data releases for systematic errors.