Message from the Editor

A few weeks ago, I had the pleasure of attending a symposium at Yale University, in honour of the 90th birthday of Dorrit Hoffleit. Dorrit has made many and diverse contributions to astronomy. She was the second recipient (after Carl Sagan) of the American Astronomical Society's Annenberg Award, for outstanding contributions to astronomy education. Her research has spanned many fields, including variable stars. She has authored many interesting papers on the history of astronomy. She has served the AAVSO in many ways, being President in 1961 and 1962. To AAVSO photometrists, however, she may be best known as the editor of the Yale Catalogue of Bright Stars, which contains a gold mine of authoritative information about most of the stars in our program. Compiling catalogues is not a glamourous activity, but it is absolutely essential. The Yale Catalogue of Bright Stars is the most used and appreciated item on my bookshelf. I thank Dorrit for that and, on behalf of the AAVSO Photoelectric Photometry program, I wish her many more years of good health and happiness.

The AAVSO Eclipsing Binary program and committee has recently compiled the fruits of many years' labours, in the form of times of minima, and (0-C) diagrams of about 100 EB's on their program. The co-authors are Marvin Baldwin and Gerard Samolyk. For a photometrist, it is interesting to look through these compilations, and be reminded that there are many EB's which are bright enough for photoelectric photometry with small telescopes. Beta Lyrae and Beta Persei are obvious examples, but there are also stars like R CMa and Delta Lib which are 5th magnitude or brighter. If you would like more information on the AAVSO Eclipsing Binary program, contact the chairman of the EB committee.

In a recent paper "Hotspots on Late-Type Supergiants" (Monthly Notices of the Royal Astronomical Society, 285, 529-539 (1997)), P.G. Tuthill, C.A. Haniff, and i.E. Baldwin report on interferometric imaging of Alpha Ori, Alpha Sco, and Alpha Her. They conclude that, in each of these stars, there are one to three unresolved features or "hotspots" which contribute between 5 and 20 per cent of the light. These seem to vary on time scales of 3 to 9 months, and are "thus consistent with a convective origin". These hotspots may be responsible for some of the light variations in these stars - two of which (Alpha Ori and Alpha Sco) are on the AAVSO photoelectric program.

Attached to this newsletter is a preprint of a paper which has just been submitted to the IAU Information Bulletin on Variable Stars, which is published on behalf of IAU Commission 27 by astronomers at the Konkoly Observatory in Hungary. W Boo is a small-amplitude red variable on the AAVSO photoelectric photometry program. It appeared to switch period in about 1990, from 25 to 50 days, and this was interpreted as a change in pulsation mode. Unfortunately, several comparison stars showed some evidence for variability, so five of you "bore down" on W Boo last year. The preprint reports on the results. The 1996 light curve of W Boo is very interesting. It seems to be a superposition of two periods: 25 and 33 days. These, along with the 50-day period, may represent adjacent radial pulsation modes.

Computerized photometry became a reality for me last summer after I successfully (but not without problems) interfaced my Optec SSP-3 photometer to a portable laptop computer with ACQUIRE software by Robert Jones. I was first inspired by an article in the AAVSO PEP newsletter several years ago by Ken Luedeke who used the same photometer and laptop computer as the ones I was using. In my case, no electricity is available at my observatory location (at the edge of a farm field north of Pickering, Ontario) other than that which I supply from batteries and so being able to use my laptop computer for recording the output from the photometer would be ideal, knowing that another observer had already solved the inevitable problems I could expect to encounter with a new computer application.

When I mentioned my intention of starting this project to Howard Landis and asked if he had any advice, he referred me to Ray Thompson. Ray lives within an hour's drive from my home and he invited me to visit his observatory. He generously demonstrated and explained the ACQUIRE software and the AAVSO and other software used to record the photometer output and then convert it to the AAVSO file format and analyse each observation set for observational error (in situ, on the spot). However, after obtaining the appropriate software and hardware, frustrating bugs persisted that prevented the system from operating properly. After several weeks of e-mail communication with Ken Luedeke, Howard Landis, Ray Thompson and Robert Jones regarding diagnostic tests, potential solutions and encouragment to continue, an internal computer hardware fault emerged as the most likely source of the problems. At this point, the simplest and most economical solution seemed to be another computer. A Saturday of shopping at second-hand computer stores in Toronto with the photometry software on a disk in my pocket turned up a good, low-cost, old (heavy, bulky and relatively small memory) laptop computer in good condition with a good battery that works very nicely for the intended task. Now, photometric data collection is different; the only keystrokes in filing and submitting data are the ones to start and test the software and then to instruct the computer to begin recording the data while looking at the photometer output on the computer screen. The only minor drawbacks to be worked out now are the observatory light pollution (if the night is not moonlit) from the heavily red-filtered monitor screen, and the sluggish computer screen (not to mention short battery life) at winter temperatures much below freezing. Now the freedom from spending many hours typing in the photoelectric observations will allow more time for analyzing and interpreting the variable star observations. I would not likely have completed this project without the valuable photometry-wise assistance from Howard Landis, Ken Luedeke, Robert Jones and Ray Thompson, as well as several computer-wise members of the Toronto Centre of the Royal Astronomical Society of Canada.

RV Tauri stars, according to the General Catalogue of Variable Stars, are: "pulsating supergiants having spectral types F to G at maximum light and K to M at minimum light. The light curves are characterized by the presence of double waves with alternating primary (deep) and secondary (shallow) minima which can vary in depth so that the primary minima may become secondary ones, and vice versa. The complete light amplitude may reach 3 to 4 magnitudes in V. The periods between two adjacent primary minima (called "double" or "formal" periods) lie in the range 30 to 150 days. Two subtypes may be isolated: RVa - variables of RV Tauri type which do not vary in mean magnitude; RVb - variables of RV Tauri type which periodically in mean magnitude with periods of 600 to 1500 days (or more), and amplitudes up to 2 magnitudes in V."

The cause of the alternating deep and shallow minima is generally agreed on; it is due to the presence of two pulsation periods in the ratio 2:1. The cause of the long-term variations is not known for sure.

In the AAVSO Photoelectric Photometry Program, there are two RV Tauri stars: AC Her, an RVa star, and U Mon, an RVb star. Below, we show the light curves of these stars on both the long-term and the short term.

Fig. 1. The long-term light curve of AC Her. The vertical scatter is due to the pulsation, which has a double period of 75.41 days.

Fig. 2. The phase diagram of AC Her, using the double period of 75.41 days. The low scatter indicates that there is no long-term variation, or other irregularity.

Fig. 3. The long-term light curve of U Mon, an RVb star. Note the variation in mean magnitude, on a time scale of 2500 days. The vertical scatter is due to the pulsation, which has a double period of 92.23 days. 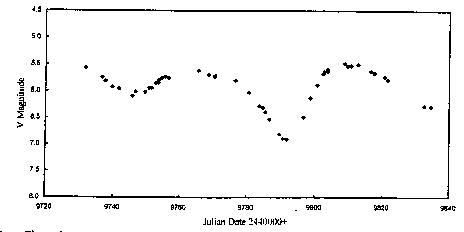 Fig. 4. The short-term light curve of U Mon, showing the alternating deep and shallow minima. The double period is 92.23 days.

We have used these light curves to determine precise times of minimum brightness of these two stars, and we are using these, along with many decades of data provided by Endre Zsoldos (Konkoly Observatory, Hungary) to study the period changes and evolution of RV Tauri stars.

Sorting Out W Boo and Its Comparison Stars

W Bootis (HR 5490, HD 129712, V - 4.81, SpT M3 III) is a bright example of a small-amplitude red variable. Percy & Desjardins (1996) recently reported that W Boo had changed period in about 1990, from 25 days to 50 days, and suggested that W Boo had switched pulsation mode. Unfortunately, the check star (HD 130446) used in the differential photometry appeared to be slightly variable. A second check star (HR 5524, HD 130603) was adopted, but it too appeared to be slightly variable. We therefore decided to observe all three stars in 1996, relative to the original comparison star, and a new check star. We report the results here.

The sigma of the (HD 130446 - comparison) magnitudes is 0.020, which suggests that this star may be slightly variable. It is also possible that the larger scatter is due to the faintness (V = 7.6) of the star. The power spectrum of the previous observations of this star (Percy & Desjardins (1996)) showed a peak at 0.1277 cycle/day, but this peak does not appear in the power spectrum of the present observations, nor does it produce a reasonable phase diagram. There are several peaks in the power spectrum of the present observations, none of which is very conspicuous. The star is KO III type, so the variability, if real, could be due to star spots. Hatzes & Cochran (1996) have recently reported short- term radial velocity variations in K giants, which they attribute to pulsation.

The 1996 light curve of W Boo (Figure 1) is very interesting. The cycle count period is 24 days (very similar to the period of W Boo before 1990), but it is strongly modu- lated, and there is some evidence for long-term variations. The light curve can be well represented as the superposition of two periods - 25 and 33 days. Periods of 25, 35 and 50 days were found by Percy & Desjardins (1996), and interpreted as adjacent radial modes. The new 25- and 33-dav periods were determined independently of the previously-known periods. The mode switching in W Boo is rather similar to that recently reported in RR UMi by Lloyd & West (1996). This star switched between periods of 34 and 61 days, with strong modulation of the amplitude.

Acknowledgements. A. Desjardins and M. Marinova were participants in the University of Toronto Mentorship Program, which enables outstanding senior high school students to take part in research projects at the university. JRP acknowledges a research grant from NSERC Canada, and thanks the AAVSO for the infrastructure within which this project was carried out. 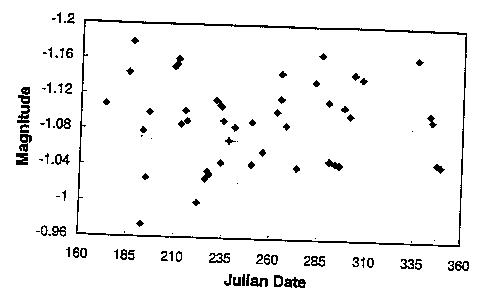 New Be Stars for the AAVSO Photoelectric Photometry Program

There are four Be stars in the AAVSO Photoelectric Photometry Program. Results of the observations of three of them (V2048 Oph, V832 Cyg, and EW Lac) have been published in JAAVSO 25, 14-20, (1996), the most recent issue. It appears that Be stars are well suited for the AAVSO PEPP, so we have added a few more. The finding charts and other particulars are attached. These stars should be observed on each clear night, if possible. Be sure to.observe the comparison and check stars as often as the variable. These -observations are being made as part of an international program of long-te= UBV photometry of bright Be stars, coordinated by Petr Hamanec, Ondrejov Observatory, Czech Republic. I thank Petr for his advice, assistance, and collaboration over many years.