I can think of few northern constellations which have as many wonderful gems as Cassiopeia. The constellation is blessed with so many wonderful nebulae and clusters that an observer can easily get distracted by the pretty sights rather than do important variable work. But hey, sometimes we do need to just step back and enjoy the sights. Besides all this beauty, Cassiopeia is home to many interesting variables. Two such stars (T Cas and S Cas) have been previously featured. 17 total stars from Cassiopeia are currently in the LPV program. One of those program stars is a very peculiar carbon star which we will now investigate more closely. 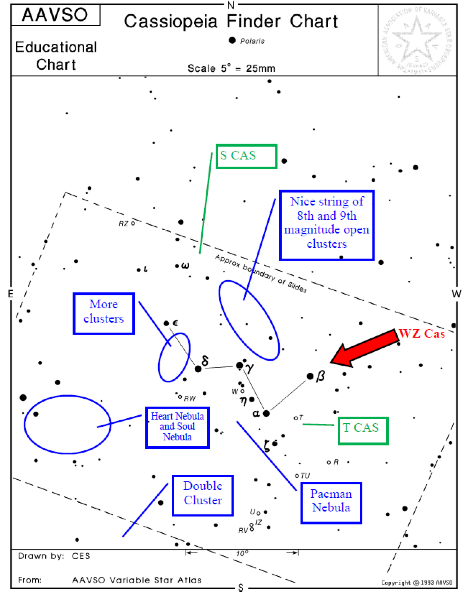 WZ CAS is classified in AAVSO’s Variable Star Index (VSX) as a SRb-type variable, meaning it is a semi-regular pulsator with irregular periodicity. It is a bright star with a visual range between 7.7 and 6.8 magnitudes. The star also has a bright optical companion only about 58 arc seconds to the East. Fortunately, the two stars are easy to tell apart, since the companion is an early B-type, and thus slightly bluish-white, while WZ Cas is quite orange-red. Herbig (1955) was able to determine that the two stars are an optical pair and not physically related by measuring their radially velocities at the Lick Observatory.

WZ CAS is a well-observed star, with 34,682 observations in AAVSO’s International Database (AID) as of Dec. 22, 2021. This makes it the 14th most observed SRb-type variable in VSX. 96% of the observations are visual. Although this is a well-observed star, the trend has not been going in the right direction. Since 2016, WZ Cas has seen a steady decrease in both unique visual observers and total number of visual observations. We need to reverse this trend, because as you will soon see, this is a unique star worthy of greater attention. 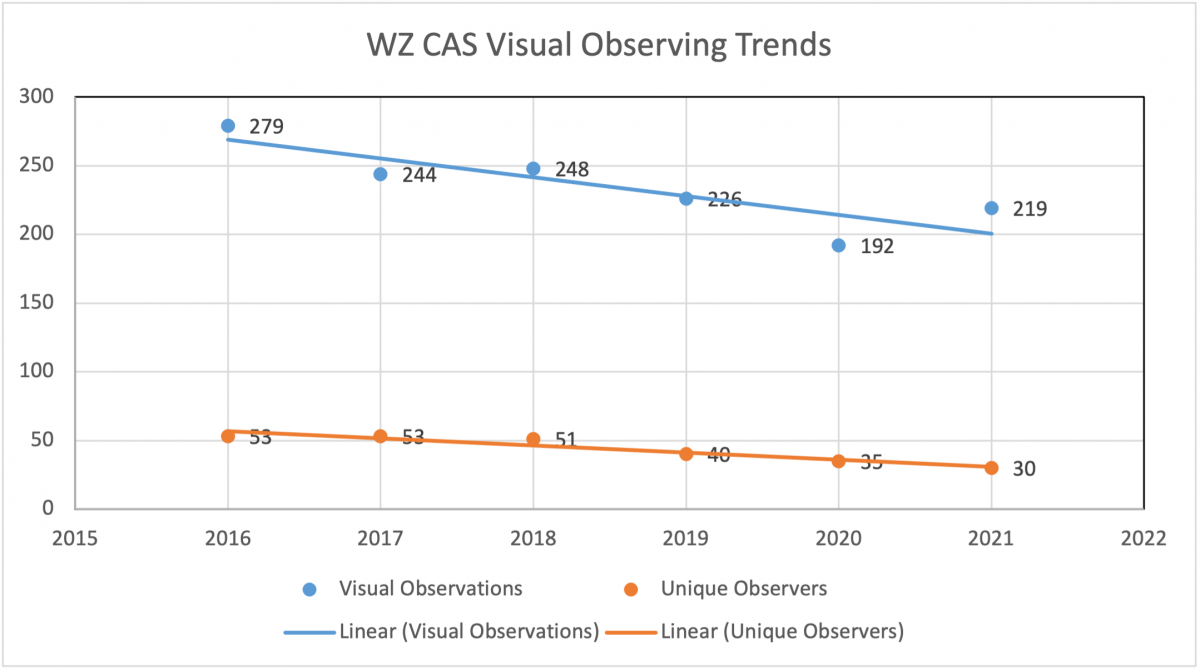 WZ Cas is a peculiar star. When I was looking up papers with a high number of mentions of this star, often WZ Cas was mentioned in the paper because it was being excluded from their samples due to its peculiar nature. If WZ Cas was cast for a part in “Rudolph the Red-Nosed Reindeer,” the star would live on the Island of Misfit Toys. Some refer to WZ Cas as a carbon star and some as an SC-type star. As we discussed last month with S Lyrae, aged red-giant stars are believed to follow an evolutionary sequence of MMSSSCC, where M-stars have C/O ratios <1, S-stars have C/O ratio = 1, and C-stars have C/O ratios >1. The C/O ratio of WZ Cas is 1.01, which would put it on the SC-type border; however, the spectra does not appear to be normal for an SC-type star as it lacks the s-process elements typical of this stellar type. Spectroscopically, WZ Cas looks more like a very cool carbon star; however, the spectra of carbon stars can be tricky due to molecular and atomic absorption bands blending together.

Hirai (1969) studied the spectra of WZ Cas, and found a very high lithium overabundance. He also found the 12C/13C ratio to be about eight (others have found it to be as low as five) and that CN molecules were depleted, and thus labeled the star as a “Lithium Star” and grouped it with the two other “Lithium Stars” known at the time. Wallerstein et al. (2011) found a typical carbon star had a 12C/13C ratio between 20 and 90, and an M-class (oxygen) giant had a 12C/13C ratio between seven and 23 with a mean around 15. There is a group of carbon stars with low 12C/13C ratios (usually around three or four) known as J-stars, which make up about 10–15% of observed carbon stars. The origin of J-stars is not well understood. They lack s-process enhancements and have high lithium contents, indicating that they may not be as evolved as a typical carbon star. This fits with what we see with WZ Cas; however, most J-stars have low luminosities. The existence of a high-luminosity J-star, such as WZ Cas, leads Sengupta, Izzard, & Lau (2013) to speculate there may be two different classes of J-stars, each with different formation scenarios.

A large lithium abundance is usually attributed to Hot Bottom Burning (HBB), a process believed to occur in massive AGB stars. WZ Cas is certainly massive. Lebzelter, Griffin, & Hinkle (2005) found WZ Cas to the most massive and most luminous (Mbol = -6.44) of the local carbon stars. WZ Cas presents a problem for HBB theory since it predicts no lithium rich carbon stars. As mentioned earlier, there is some indication WZ Cas is right on the early stages of being a carbon star. However, Florine, which is believed to be created in the He-rich intershell of TP-AGBs, increases in abundance along with carbon. Abia et al. (2010) found WZ Cas to have the highest Florine abundance of the stars they studied. HBB also predicts bolometric magnitudes less than -6, so WZ Cas is again just outside the range to fit the theory. All in all, the star is chemically hard to wrap your head around and is a true misfit.

WZ Cas has a complex light curve. VSX list the period as 186 days; however, this star is clearly multi-periodic. It has two main periods which are caused by radial pulsation. Kiss et al. (1999) found the main periods to be 373 days and 187 days. Lebzelter, Griffin, & Hinkle (2005) similarly found periods of 366 days and 186 days, and note the possibility of longer duration variations on the order of 1,000 days. They speculate these long duration variations to be caused by large convective cells moving across the surface of the star, and not radial pulsation like the two main periods. Due to the multi-periodic nature of the star, I found producing aesthetically pleasing light curves and phase plots nearly impossible, so I’m not including any in this article like I normally do. The two pulsation periods do seem consistent over time.

In conclusion, this is an interesting, misfit star that is worthy of future study and observation. We need to reverse the observing trends of this star! Bright stars like WZ Cas can be tricky to visually estimate due to the lack of suitable comparison stars, but that is not the case with WZ Cas. Due to the rich star field, several bright comparison stars are close by. The star is easy to find, and there are many beautiful sights nearby. You don’t need a large scope due to its brightness. With a +60-degree declination, the star is circumpolar for most of us in the northern hemisphere. So, there are no excuses—go ahead and put this one in your observing program.