AAVSO Forum threads (scroll to the bottom of a thread for latest posts):
- Campaigns and Observation Reports: https://www.aavso.org/b-per-oct-2020-campaign

Please subscribe to this thread if you are participating in the campaign so you can be updated by the astronomers and by HQ. Join in the discussion or ask questions there!

“Dr. Donald F. Collins (AAVSO member), Dr. Robert Zavala (US Naval Observatory, Flagstaff Station), Jason Sanborn (Lowell Observatory), and Dr. Anatoly Miroshnichenko (University N. Carolina, Greensboro) have requested high time-resolved observations of the bright star b Persei during the upcoming predicted secondary eclipse of the third star as it passes behind the AB inner pair.  The observation window should last about 2 weeks beginning October 18, 2020, which is about one week before the predicted date of mid-eclipse (October 26.4 ± 1 UT).   It is important that observers observe several long time-series observations both before the eclipse and after the eclipse as well as all parts of the eclipse.

“The b Persei system (HD 26961, HIP 20070, HR 1324, SAO 24531) consists of three stars in a hierarchical system.  The A and B components are close-orbiting (1.5237 d period) in a low-inclined orbit that exhibits ellipsoidal variation (~0.06 magnitude variation) with no eclipses. The brightest star of the pair is spectral class A2V.  The other two stars in the system are believed to be spectral class F (Hill et al., 1976, ApJ, 208,152).   The recent campaigns by AAVSO observers have revealed the following:

1.    Both the primary and secondary transits show significant light curve dips in total brightness on the order of 0.1 mag to 0.5 mag.

2.    The orbital period for the C star is 704.9 ± 0.1 d based on the time difference between successive transits of the same primary/secondary phase of the C orbit. The previously published orbital period is 702 d (Hill 1976).

3.    Radial velocity observations by Anatoly Miroshnichenko, which separate the short period RV oscillations from the long period RV oscillation, have indicated that the eclipses observed in January 2015, December 2016, and November 2018 (Figure 1) were secondary eclipses in which the  C star transits behind the A-B pair.  We have also observed three primary eclipses: March 2016, February 2018, and January 2020 (Figure 2).  In the primary eclipses the C star temporarily blocks some of the light from the close-orbiting A-B pair.

4.    Each transit (or eclipse) is different – due to the lack of a simple commensurate relationship between the short period A-B stars and the long period of the of the AB-C triple system.

5.    The deepest relative minimum observed occurred during the primary eclipse of January 2020 at mJD 1867.4 (Figure 2).   The solid curve in Figure 2 (the simple model) calculates the result if the C star (spectral class F, luminosity 2 x Lsolar) is fully ingressed over the “disk” of the primary star A (spectral class A-V, luminosity 10 x Lsolar). 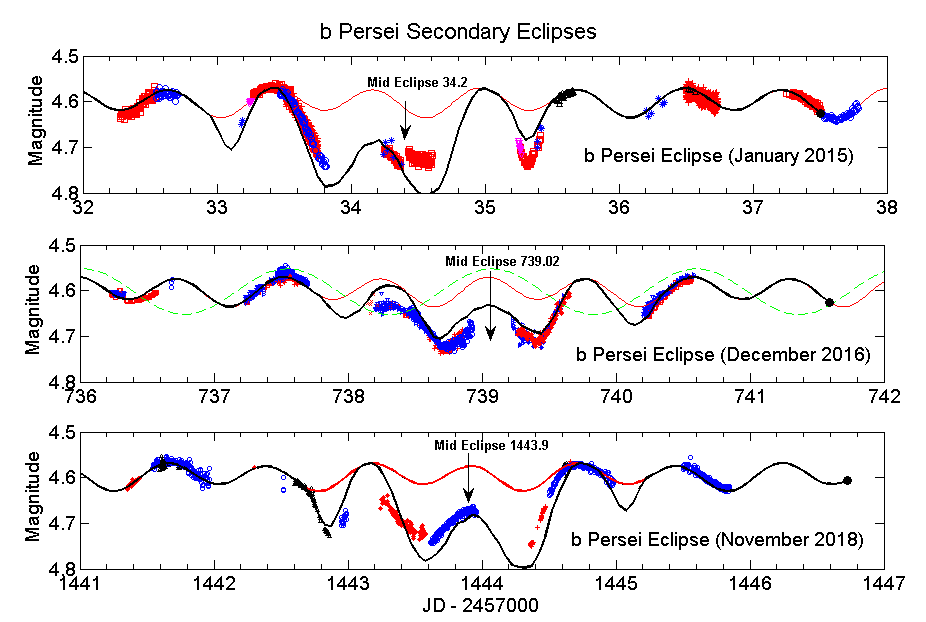 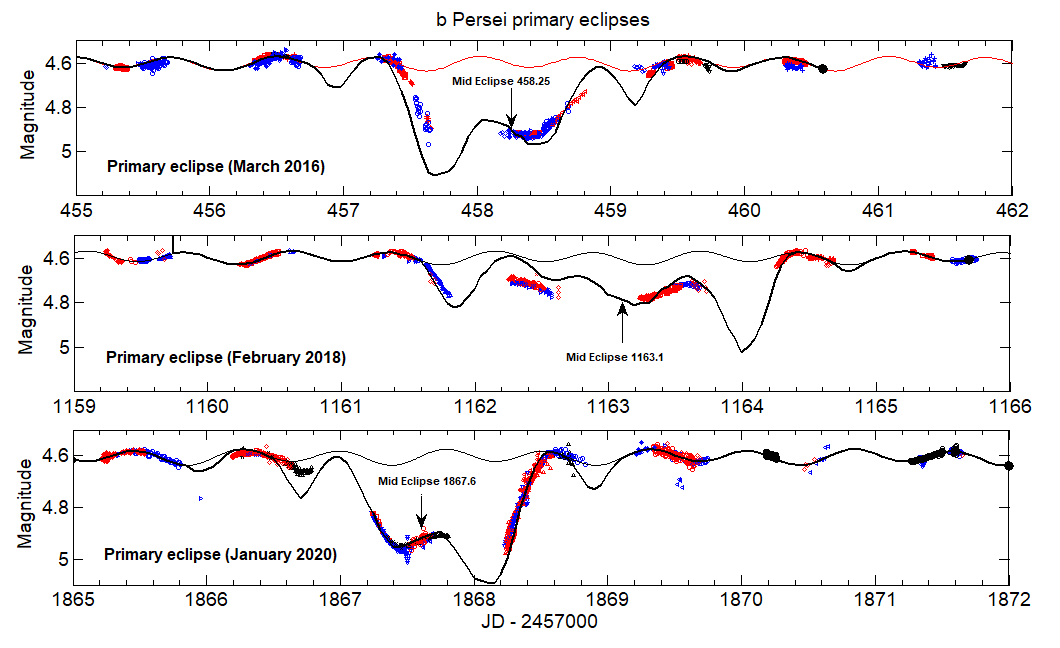 “Observers are asked to obtain high-resolution time-series observations of long duration in V (or the green channel from DSLR cameras) during the eclipses as well as as many as possible out-of-eclipse time-series observations of the system during the two week window centered on the October 26 eclipse (October 18-November 2).  Out-of-eclipse data are needed to calibrate the various offsets expected from different observing systems.

“Guidelines for observing bright stars for both CCD and  DSLR cameras may be found in the Alert Notices for the earlier campaigns.  DSLR guidelines may also found in the AAVSO DSLR Observing Manual.  Another resource for DSLR photometry may be found by Buchheim (2018, used with Buchheim’s permission) ."

Reference
Buchheim, R. K. 2018,  “Lessons from DSLR Photometry of b Per “Third Star” Eclipse (February 2018)”, SAS-2018 The Symposium on Telescope Science and ALPO Annual 2018 Meeting, Proceedings for the 37th Annual Conference of the Society for Astronomical Sciences [http://www.socastrosci.org/Publications.html] pp 71-77.
[Note: Bob Buchheim has given AAVSO permission to make available a stand-alone copy of his presentation on the AAVSO web site for observers' easy access - dfc]

An Alert Notice archive is available at the following URL:
https://www.aavso.org/aavso-alert-notices-for-observing-campaigns-and-di...