Alert Notice 791: Anticipated secondary eclipse of b Per centered on September 29 2022 UT

They provide the following information:

"The observation window should last at least 2 weeks beginning about September 19, 2022, which is about 10 days before the predicted date of mid-eclipse (UT September 29.41, 2022 ± 0.1 d ). It is important that observers observe several long time-series observations both before the eclipse and after the eclipse as well as all parts of the eclipse.

“Observers are asked to obtain high-resolution time-series observations of long duration (several hours) in V (or the green channel from DSLR cameras) during the eclipses as well as as many as possible out-of-eclipse time-series observations of the system during the 20-day window centered on the September 29 eclipse (September 19 – October 8). Out-of-eclipse data are needed to calibrate the various offsets expected from different observing systems.

“It is recommended to use the star labeled '55' (AUID 000-BLL-386 = HIP 20156 = SAO 39457 = HR 1330 = HD 270840) in the AAVSO finder chart at 5.456 V for the comparison star. For a check star HIP 20370 (J2000 RA, Dec = 04 21 45.47 +50 02 06.64) may be used if the observer's field of view is about one degree. This star is not in the AAVSO sequence. Any other AAVSO sequence stars may be used as a check star if available in the observer's field of view. New observers are welcome - especially Asian and Pacific observers to help fill the gaps in the transit light curves. Atmospheric scintillations are a major problem with bright star observations due to the necessary short exposure times. These are removed by obtaining many short exposures which can then be averaged by image stacking or averaging the results of many short exposures.

"DSLR guidelines may be found in the AAVSO DSLR Observing Manual. Another resource for DSLR photometry may be found by Buchheim (2018, used with Buchheim’s permission) ."

1. Both the primary and secondary transits show significant light curve dips in total brightness on the order of 0.1 mag to 0.5 mag.

2. Distinguishing between primary and secondary eclipses has been made possible from radial velocity observations by Anatoly Miroshnichenko, which are shown as a dashed curve for the December 2016 eclipse in Figure 1. The long period radial velocity of the A star shows that the A star begins to approach the Earth after passing from beyond the transit. Only the A star exhibits suitable spectral lines for RV measurements.

3. The orbital period for the C star is 704.5 ± 0.1 d, based on a linear fit to the fitted dates of the four high-resolved time-series of secondary eclipses. The previously published orbital period is 702 d (Hill 1976). 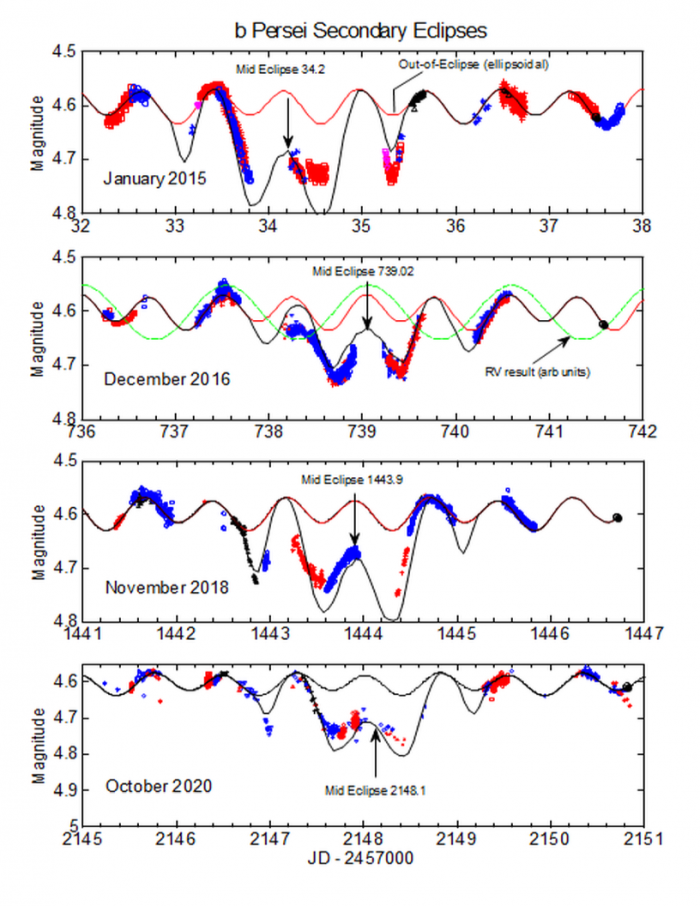 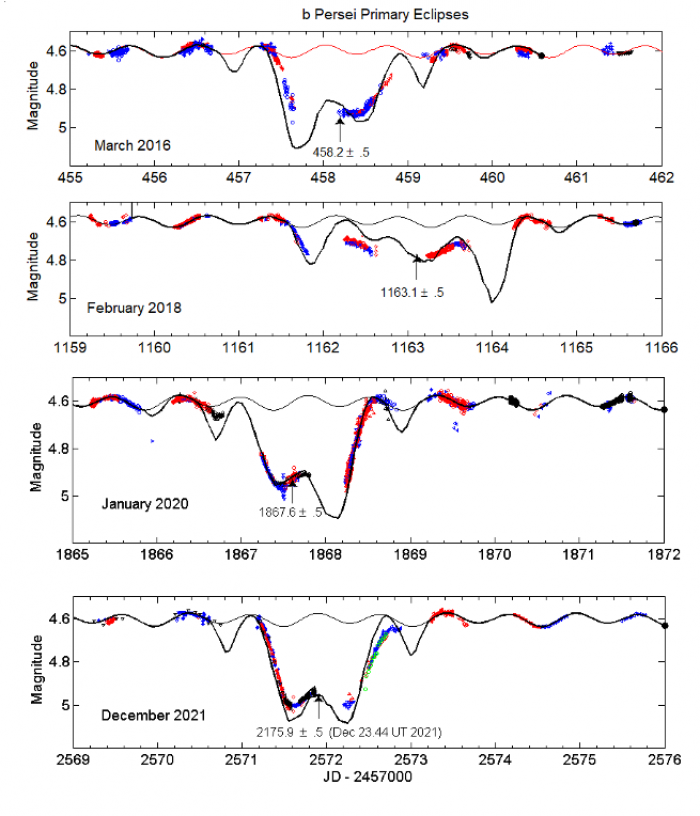 References
Buchheim, R. K. 2018, “Lessons from DSLR Photometry of b Per “Third Star” Eclipse (February 2018)”, SAS-2018 The Symposium on Telescope Science and ALPO Annual 2018 Meeting, Proceedings for the 37th Annual Conference of the Society for Astronomical Sciences [http://www.socastrosci.org/Publications.html] pp 71-77.
[Note: Bob Buchheim has given AAVSO permission to make available a stand-alone copy of his presentation on the AAVSO web site for observers' easy access – dfc]